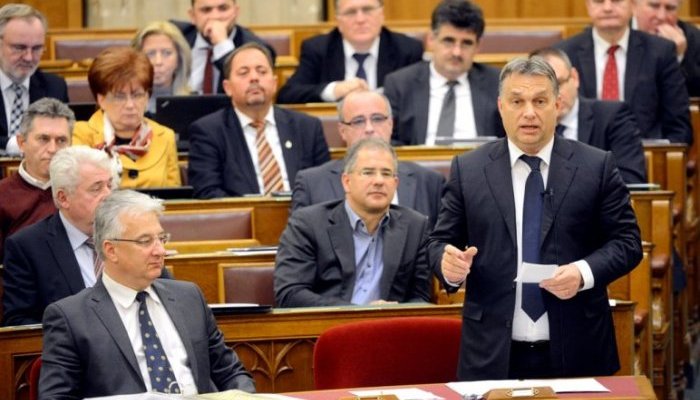 The prime minister of Hungary has devised an extraordinary face-saving strategy for dealing with allegations of corruption brought by the United States embassy against senior government officials.

If beleaguered Hungarian Tax Authority (NAV) president Ildikó Vida gets fired over this matter, it will not be because the government of Hungary believes US allegations of corruption but because she refuses to sue US Chargé d’affaires André Goodfriend for defamation, which, according to Prime Minister Viktor Orbán, is the only possible way this case could ever end up in a Hungarian court.

Having suggested on Friday over the course of his weekly radio interview that Vida sue Goodfriend for defamation, on Monday Orbán announced that “if she does not immediately file a suit against the American spokesman, I will fire her!”

Orbán also criticized Goodfriend for accusing a government official of corruption “while hiding behind diplomatic immunity”. Orbán called on Goodfriend to “be a man and take responsibility for his accusations” by agreeing to allow himself to be sued in a Hungarian court for defamation.

“In Hungary, if someone is proven to have been involved in corruption, we don’t replace that person but lock them up,” said the prime minister, neglecting to mention the fact that a similar fate awaits people convicted of defaming public officials.

Later in the day the head of the Fidesz caucus, Antal Rogán, an authority on corruption, told the Hungarian News Service that Goodfriend could prove to a Hungarian court of law if Vida was guilty of corruption, “but that this would first involve the US agreeing to lift his diplomatic immunity”.

Rogán said that were something like this to happen abroad involving the Hungarian state or one of its diplomats, the Foreign Ministry would agree to let him prove the allegations in a court of law.  “We are simply asking that there be a procedure in Hungary where it can be proven before a court of law whether the American embassy or Ildikó Vida, the president of the National Tax and Customs Office, is right,” explained the Fidesz politician who resigned as mayor of Budapest’s District 5 in April in order to retain his immunity from prosecution as a sitting member of parliament.

Goodfriend responded to yesterday’s theatrics in his usual laconic manner with the following tweet: