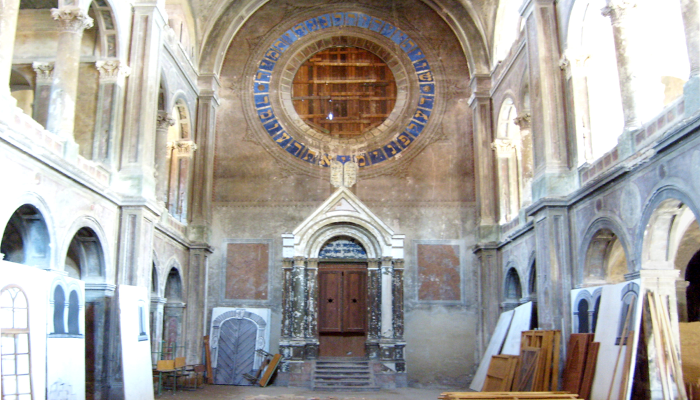 Our Forgotten Neighbors: A photograph taken of the Pápa synagogue in 2008

The closing event for “Our Forgotten Neighbors”, an exhibition detailing pre-World War II lives of Hungarian Jews from Pápa, took place at the Los Angeles Museum of the Holocaust on Sunday. The exhibition, which initially debuted in the ruins of Pápa’s 19th century synagogue in 2012,  showcased the lives of Pápa’s vibrant pre-war Jewish community by offering a glimpse into lives of several of the town’s Jewish families.

What makes the “Our Forgotten Neighbors” exhibit so unique is its ability to personalize the memory of Pápa’s Jewish families who had fallen victim to the Holocaust in Hungary. Located 150 km west of Budapest, Pápa’s once-thriving Jewish community can trace its roots back to the 17th century. In the mid-18th century Count Ferenc Esterhazy de Galantha (born in Pápa, Hungary; 1715-1785) offered his protection to the Jewish community living on his land, allowing them to practice their faith freely.

In 1844, Papa’s local Jewish community began building a synagogue in the town’s predominantly Jewish neighborhood. In continuing his family’s good relations with the local Jewish community, Count Paul Esterhazy de Galanthay donated 100 thousand bricks to assist in the synagogue’s construction. Construction of the new synagogue was completed in 1846, and its opening service was officiated by Rabbi Leopold Löw (the rabbi is credited for being the first to introduce the Hungarian language into his services).

Over the next 70 years Hungarian Jews became increasingly integrated into the mainstream culture of Austria-Hungary. Many families adopted Hungarian names, were actively involved in civic life, and even served in the kingdom’s military.

In 1920 Hungary’s legislature ratified the Numerus Clausus law which placed limitations on the number of Jews taking part in Hungarian academia. The law is widely considered to be Europe’s first anti-Jewish law of the 20th century.

A series of repressive anti-Jewish policies were ushered in during the interwar period as Hungary’s leaders aligned themselves with the fascist governments of Germany and Italy. Additional anti-Jewish laws were introduced in Hungary from 1938-1941 under Regent Horthy. In 1941, the first of Hungary’s Holocaust mass-murders took place at Kamianets-Podilskyi where tens of thousands of Hungarian Jews were massacred.

In 1944 Pápa’s Jews (as well as Jews from surrounding villages) were rounded up and forced into the town’s newly-built Jewish ghetto. Trains began transporting ghetto inhabitants to Auschwitz shortly thereafter. Papa’s synagogue fell into disrepair during the war. Axis forces use the synagogue as a horse stable.

The synagogue held a service in 1945, but due to the drastically diminished Jewish population of Pápa, the synagogue fell into disuse. During Hungary’s socialist era, the synagogue was used for storage. To this day the synagogue is in a state of ruin. Its once distinctly unique stained-glass windows have been smashed, and the building’s interior is void of any trace of the vibrant community that once gathered within its walls.

In 2010, Dr. Andras Gyekiczk began collecting photographs of the descendants of Pápa’s Holocaust survivors and researched historical documents provided by various local sources. Together with the Jewish Cultural Heritage Society of Pápa, the Municipality of Pápa, the Memorial Museum of Hungarian Speaking Jewry in Israel, the Count Károly Esterházy Palace and Museum in Pápa, the Mór Jokai City Library, the Pápa Reformed Church Collections, the Veszprém County Archives, and the Centropa Foundation, Dr. Andras Gyekiczk organized “Our Forgotten Neighbors” to tell the story of Pápa’s lost Jewish families.

In 2012, the exhibition debuted in Pápa’s abandoned synagogue to wide acclaim. Rather than focusing on the horrors faced by Pápa’s Jewish families during the Holocaust, the exhibition focused instead on how these respected members of the community lived their everyday lives prior to the Shoah. Among those in attendance were Ilan Mor (Israel’s Ambassador to Hungary) and Sandor Polnauer (Bern’s chief rabbi).

In 2013, The Los Angeles Museum of the Holocaust collaborated with Steven Andras Geiger of Mensch Foundation International to bring the exhibition from Pápa to Los Angeles. Its opening event was held on November 2nd.

Mr. Geiger told the Budapest Beacon that he offered to assist in bringing the unique exhibition to the United States because its theme presented a unique opportunity for people to identify with the lives of Hungarian Jews who were lost during the Holocaust. Speaking to those in attendance, Mr Geiger used the closing ceremony to announce a generous donation made by Hungarian-born Angelino Jimmy “Imre” Svatics, to assist in the restoration of the Pápa synagogues stained-glass windows.

Closing remarks were also made by the Los Angeles Museum of the Holocaust Executive Director Samara Hutman, Member of the Board Klara Firestone, and Mr. Svatics.

Board member Klara Firestone shared the importance of remembering those whose lives are affected by senseless violence. She emphasized that we must always remember the victims of inhumanity, such as the Holocaust, or the recent violence in Rwanda, because knowledge of such mass atrocities is crucial in helping us preventing them from reoccurring.

The memory of these families lives on decades after the Holocaust. Their story alone is helping to restore one of the last remnants of Pápa’s once thriving Jewish community. The Los Angeles debut of “Our Forgotten Neighbors” was in all respects a suitable tribute to those lost in the Holocaust.