Over 1000 attend “Make Yourself Free” demonstration in Budapest 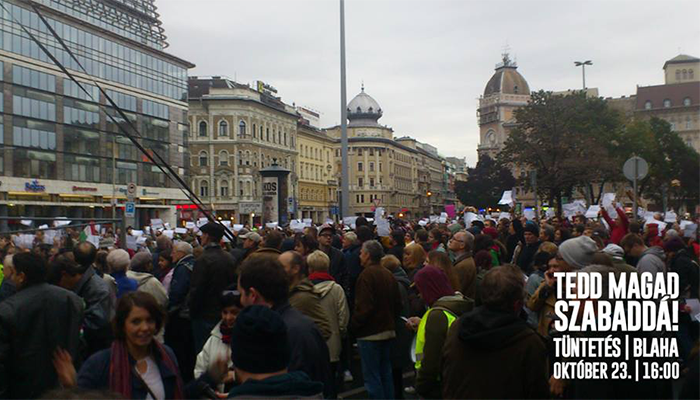 Over one thousand people participated in the “Make Yourself Free” civil demonstration in Budapest’s Blaha Lujza square yesterday. Event organizer Human Platform arranged for various speakers to address the crowd on the loss of freedom, poverty and the degrading situation of public workers and Roma.

Public Workers Movement for the Future spokesman József Csonka spoke about the difficult situation of public workers, their low wages, bad working conditions and the stigma of poverty.  Csonka demanded public workers receive minimum wage and be afforded the same legal rights as regular workers.  He was followed by Stefánia Kapronczay, managing director of the Hungarian Civil Liberties Union (TASZ), who criticized the government’s actions over the past four years from replacing the constitution to targeting civil organizations.  Kapronczay believes those currently in power want to control everyone, and told the crowd it is especially important people actively participate in public matters and not only express their opinion in elections.

Attila Varga of the Uccu Roma Informal Educational Foundation spoke of his own experiences with segregation in schools.  He said no government had fulfilled the demand for social equality since the system change 25 years ago.  Playing on the Hungarian word for republic (köztársaság), Varga said that since 2010 there had been no chance for “the country to be an association of the people (köz társasága)”. Community website IWIW founder Zsolt Varady talked about state institutionalized tax fraud and the flawed tax systems used since the system change, which he believes were the result of deliberate political decisions.   According to Varady “tax fraud and tax avoidance is wrong”.  Nevertheless, he called for a civil movement to oppose the proposed internet tax.

Éva Tessza Udvarhelyi, founder of the School for Public Life, told the crowd not to be afraid of politics. They should participate in public life because everyone “needs to learn democracy”.