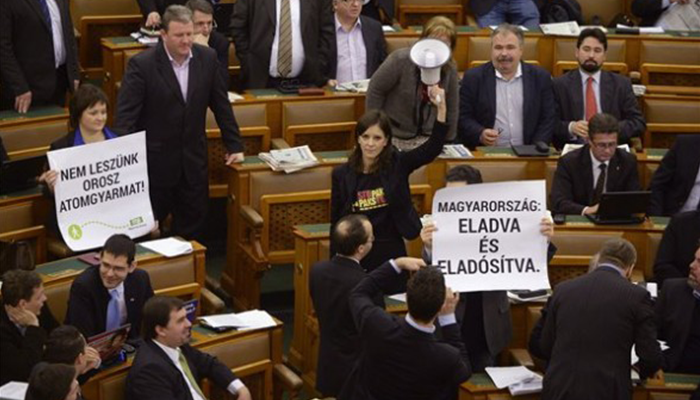 Today the Hungarian parliament approved the framework agreement concluded on 14 January with the Russian State Atomic Energy Corporation to build two new nuclear reactors at the Paks nuclear power plant.  Much of the political opposition absented itself for the vote, as did Fidesz MP Zoltan Illes, state secretary for environmental affairs, a long time opponent of nuclear power.

Although originally not scheduled to take place until next week, by a show of hands the Fidesz-KDNP majority voted to move the final vote forward a week after rejecting all proposed modifications to the bill submitted by the opposition.

After forcing a roll call vote, four LMP MPs disrupted the vote with megaphones set to give of a loud siren and placards saying “we will not be an atom colony of Russia” and “Hungary: sold and indebted”. The presiding speaker ordered a thirty minute recess while house guards confiscated the megaphone and placards at the orders of Parliamentary President Laszlo Kover. Voting continued after parliament voted to exclude the four LMP MPs from further debate on the bill.

When introducing proposed modifications to the bill the previous evening, LMP co-chair Bernadett Szél criticized the government for not allowing any public, expert, or political debate and warned that LMP would “go to the wall” to prevent the government from committing the country to nuclear energy in this manner.

If you had honestly told the Hungarian people what you were planning to do before you came to power then you would not have received a two-thirds majority.  Nor would you have formed a government.  It is inconceivable what you are doing to the Hungarian people.  Practically, you have left out a total social debate, a total expert debate, and a political debate.   We don’t even know what it is we’re voting on because you have submitted a framework agreement and all the important details are contained in a detailed agreement.

While voting was under way, Greenpeace activists protested outside dressed in white hazmat suits and wearing helmets designed to resemble blood-stained eyeballs.

A separate agreement regarding the financing of the project is to be submitted to parliament for approval.  On Thursday Minister for National Economy Mihaly Varga announced that the Russia would lend Hungary 80% of the projected EUR 10-12 billion required to realize the project for a period of thirty years at an annual interest rate of 3.95-4.95 percent.  Repayment of the loan is to take place between 2025 and 2046 after the first reactors come on line in 2023.   Daily left-wing paper Nepszabadsag estimates the project will end up costing Hungarian taxpayers at least HUF 3,00 billion (EUR 10 billion) and possibly substantially more as such projects tend to experience significant cost overruns.