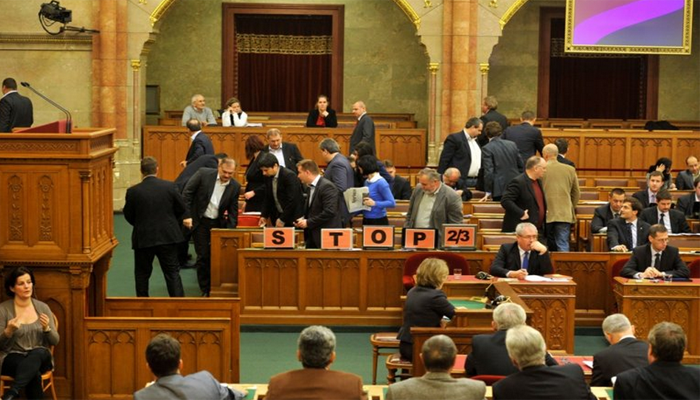 Less than 12 hours after a prolonged standoff between riot police and protesters on the steps of parliament following Monday evening’s “Day of Public Outrage” protest, Hungary’s parliament passed a controversial tax bill Tuesday morning by a vote of 128 in favor and 30 opposed.

Not a single member of the political opposition voted in favor.

The entire Hungarian Socialist Party (MSZP) parliamentary faction vacated the chamber before the final vote in protest.  In their place they left a message spelled in large block letters: “STOP 2/3”.

The new tax law does not change personal or company income tax rates. The flat personal income tax is to remain at 16 percent.  Corporate tax remains at 10 percent up to gross profits of HUF 500 million (USD 2.5 million).  Thereafter it is 19 percent.

The special sectoral taxes on banks, telecommunications companies and large retailing chains are to remain.  However, bank accounts used by the Hungarian treasury and the Ministry of National Economy will no longer be subject to transaction taxes.  The current tax on bank card transactions is to be replaced with an annual tax of HUF 800 per bank card.  Unused bank cards are to be taxed at HUF 500 per year.  The fact that the reason for this offered by the Ministry of National Economy is to “encourage people to use their bank cards” suggests that consumers have limited the use of bank cards to the once-monthly transaction tax-exempt withdrawal  to which they are entitled by law.

The law creates a number of new taxes in addition to increasing or expanding the scope of existing taxes.

Beginning January grocery store chains will have to pay an “oversight fee” of between 0 and 6 percent of their annual turnover based on the previous year’s net revenues.  Grocery stores having less than HUF 500 million (USD 2 million) in annual revenues are exempt.  The tax incrementally increases to 6 percent of sales exceeding HUF 300 billion (USD 12 million),

With the adoption of the tax law the parliament also passed a decision to introduce an electronic inspection system on public roads, the purpose of which is to monitor the actual route of product allegedly being exported or imported in order to prevent products from being sold that have not been reported to the tax authorities.

Rules governing the declaration and payment of value added tax have also been modified.  Whereas at present companies submit VAT reports monthly, quarterly or even annually depending on turnover, from next year new companies will be required to submit monthly VAT reports, regardless of turnover.   Existing companies will no longer have the option of reporting VAT just once a year.  Instead, they are to submit quarterly filings.

The law provides for telecommunications companies to provide the tax authority with requested data regarding internet sales.

From 2015 companies supporting higher education will be entitled to a preferential tax rate.

With regard to agriculture, from 2015 buying and selling agricultural cooperatives are to be except from local industry taxes.   The VAT tax rate in the case of buying and selling large farm animals such as cows, sheep and goats is to decrease from 27 percent to 5 percent.

In the interest of harmonizing Hungarian law with that of the European Union, from 2015 the volume of home spirits exempt from excise tax is to decrease from 200 to 50 liters and will only apply to individuals engaged in growing fruit.  Otherwise, an excise tax of HUF 1,670 (USD 6) is to be paid after every liter of 100%-proof alcoholic beverage.

Excise taxes on beer, wine, sparking wines and intermediate alcoholic products is to be capped at HUF 150 million annually, independent of net sales, with the exception of spirits made from “at least seven kinds of herbs”.

The scope of environmental protection product fees is to be extended to include certain plastic products, such as artificial flowers and cleaning and health products, as well as office paper.  Handicrafts produced by micro- and small companies will no longer be subject to this tax.

Local governments are to be given the right to introduce one or more local taxes from 2015.  The taxes may not apply to anything already taxed either centrally or locally.

Cooperatives are to be exempted from local industry taxes in those cases where at least 95 percent of net revenue is generated through sales by members or sales of members’ products.

The tax exemption of life insurance policies is to expire in 2017.

From 1 January 2015 married couples will be entitled to a HUF 5,000 (USD 25) deduction, providing it is the first marriage for at least one member.  According to the Ministry for National Economy, between 2016 and 2019 the monthly tax deduction per child will increase HUF 2,500 each year from HUF 10,000 to HUF 20,000 in the case of families with two children or more.

The tax law changes the law on gambling as well.  From 2015 state-owned Szerencsejáték Zrt. is to be the exclusive operator of online sports betting.  Only those licensed to operate casinos will be permitted to operate online casino and card games.  Although the law does not mention them by name, it grants Andy Vajna and Gábor Szima a virtual monopoly on on-line gambling.

Blanket compensation for losses in Ukraine

The tax law allows companies to seek compensation up to HUF 5 billion (USD 20 million) for losses incurred in Ukraine as a result of “Russian destabilization” in the form of tax refunds.  Although the original bill only offered such compensation to lending institutions, the bill was subsequently modified to become “sector neutral”.  Henceforth, Hungarian companies suffering a serious loss in the value of shares held in Ukrainian companies will be able to apply for compensation.

Liberal opposition party Dialogue for Hungary (PM) said the package is the start of some HUF 1,700 billion in austerity.  In a press conference on Tuesday, PM co-chair Timea Szabo said it is not possible to continue economic policies that involve the introduction of one tax after another.  In lieu of additional taxes, the opposition politician called on the government to choose an economic policy that would enable the forint to strengthen and for working capital to flow into the country.  She demanded the government arrest the impoverishment of the country and restore the graduated income tax.

Hungarian Liberal Party (MLP) chairman Gábor Fodor said the tax package attested to the failure of the unorthodox economic policies.  Fodor said that in contrast to its declarations, it is not decreasing taxes but continuously increasing them, and that taxes assessed on the commercial sector would eventually be passed on to consumers.   Economic consultant Zoltán Bodnár said the package contains many elements the purpose of which is to drive certain actors out of the Hungarian market.  As examples he cited the increase in the grocery oversight fee and the health contribution assessed on tobacco products.

MSZP chairman and parliamentary fraction head Tobiás József warned that the “Orbán package” would cause 2015 to be a year of impoverishment, and that the numbers living in Hungary under the minimum standard of living would increase to 5 million as a result of the tax law and the budget.  József said the result would not be 5 million employed Hungarians but 5 million impoverished.   He said it was unacceptable that taxes on groceries would “brutally increase in 2015 and the vast majority of society would have to pay “soap and hygiene tax”.  He complained that the current VAT rate of 27 percent, Europe’s highest, had not decreased.

Jobbik MP Janos Volner said the tax law was intended to enrich Fidesz supporters at the expense of average Hungarian citizens and companies.   He pointed out that only casino concessioners Andy Vajna and Gábor Szima would be allowed to operate on-line gambling.  He said the changes benefitted Hungarian grocery store chain operator CBA and accused the government of formulating peripheral conditions that would impose a huge burden on foreign tobacco producers, while Hungarian economic actors nurturing good relations with the government would remain largely exempt from having to pay these taxes.  Volner accused the government of restructuring the media market to its liking and introducing taxes that are intended to be harmful to specific actors, such as RTL Klub.