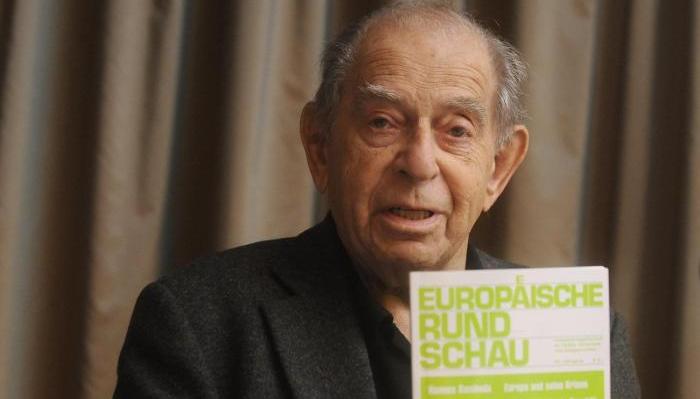 Despite disappointment, conflict and selfish behavior, the European Union is one of the great successes of modern European history, 85-year-old Paul Lendvai told Népszabadság.  We asked the editor-in-chief of Europäische Rundschau and the author of sixteen books on Eastern-Europe translated into many languages primarily about the state of the continent.  He believes the Hungarian head of government will never regain Europe’s confidence, and that whatever happens in Hungary, the West is not giving anyone a blank check.

I have been following the birth of Europe since the 1960s.  As I reported for the Financial Times I saw in British politics the hope, the disappointment, and then the same in Austria.  As a philosopher I watch current processes as well.  Of course, it is necessary to distinguish between the old and new member states, but there is disillusionment on both parts.  In Brussels, Paris, and Berlin they underestimated the collapsed state of the societies of the newly admitted members and the degree to which they had not come to terms with nationalism, and the enormous road ahead of them in the absence of political experience.  The Central-Europeans, including the Hungarians, overestimated the willingness of the West to help.

This has become more pronounced since the 2008-2012 crisis, because the Central-Europeans were less able to handle the crisis, and the West was hypnotised by the relative fast growth of GDP in Central- and Eastern-Europe.   Many governments could not resist the temptation of exploiting feelings and blaming investors and the capital markets for all the problems, even though nobody promised that Austrian, Italian, or German bankers would operate in a charitable manner later.  Naturally, they wanted to make profits.  Selfishness, greed, or stupidity sometimes occurred, but what would have become of Czech, Slovak, Polish and Hungarian economics without western capital and without western banks?  The whole thing would have resulted in a double disillusionment, grudges, jealousy, and prejudice.

I always laugh whenever I read about the incurable problems of Austria or the other western countries.  Sometimes people don’t realize how well they live in comparison to earlier times and of course in comparison to Eastern-Europe.   And then there is the migration:  I have never seen so many Hungarians in London, but the same applies to Vienna or Switzerland.  There are tensions in the affected countries not because there are so many Hungarians or Poles, but rather because of feelings about Africans and Muslims.   Nationalism is continuously characteristic of nearly every Eastern and Central-European country.  There are no hoards of immigrants bringing foreign culture, however the system of connections is very complicated in the case of Slovaks or Romanians in which there is always the danger of explosion.

The difference in living standards and worker productivity between Austria and Hungary is about the same now as it was before Hungary joined the EU.  The divide has not decreased, however Hungary has slipped in its own region.  The fact that Austrian banks, Erste or Raiffeisen, which brought great technical knowledge and capital to Hungary, are suffering huge losses, is very harmful.  In the meantime the country is falling back to the past, and is rejecting modernity just as it did one hundred years ago or earlier.

The role of personality

Not long ago I spoke at length with Václav Klaus, former president of the Czech Republic.  He supported the Ukrainian Russian politicies and was so critical of the EU, that Helmut Kohl once said after meeting him that he had the feeling that it was as though the EU joined the Czech Republic, and not the other way around.  Personalities play a large role in the EU.  From this point of view, the election of Jean-Claude Juncker as president of the European Commission is very important. He has made a name for himself as someone who is thoroughly professional.   Furthermore, for the first time the European Council has a Polish president, which is a huge thing for the whole region, and a new situation.  Unfortunately, many countries still sent discredited politicians or potential rivals to those in power to Brussels, and not those who would be most suitable.

There is a need for openness.  Already all investments depend on EU money.   Foreign investors, however, need rule of law and steps against corruption.  They need to feel as they did in the 1990s that they are welome, because while they want to make money, they also take the country forward.  The state doesn’t need to support what is good for the decision makers or their families, but rather what points to the future and creates technology.  It is worthy of Absurdistan that the recently disgraced István Töröcskei wanted to buy Raiffeisen with his bank.

The other national interest is the rediscovery of compromise.  A political and economic compromise, and agreement with the trade unions, entrepreneurs, and the real agricultural organizations.  Unfortunately, trust is quickly lost but only very slowly regained.  Orbán may be able to stay in power, but he will never regain Europe’s trust.  Whatever happens in Hungary, the West will not give anyone a blank check.  It must once again earn its support.