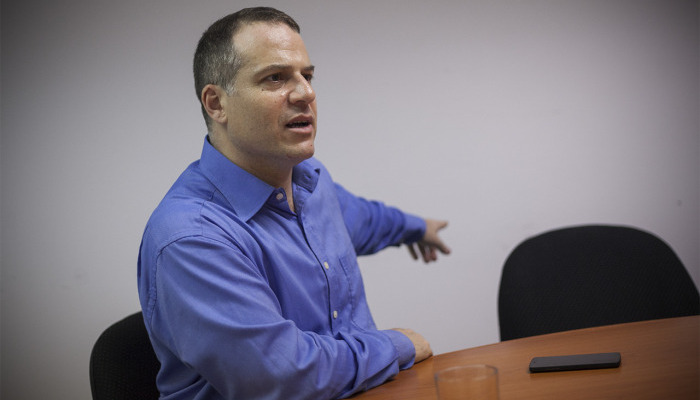 Opposition party Together co-chair and Budapest 5th District assemblyman Péter Juhász held a press conference yesterday at which he accused the district government of engaging in the systematic, illegal sale of public property at substantially below fair market prices.

Juhász told members of the Hungarian press that, having examined several dozen sales contracts, he and his colleagues determined that in every case the subject real estate was sold to the new tenant “in a manner that was unlawful and illegal”.

He claims a system was built by “well-trained people” in order to “give the appearance of legality”, but which in fact violated numerous laws and district ordinances.

“They manufacturered various documents to support this and various companies were used,” said Juhász, who believes the goal of the system was to sell real estate owned by District 5 at below market prices to designated buyers without soliciting competing bids.

The end result is the loss to the district government of billions of forints worth of real estate assets, according to Juhász.   “Certain cases involve forged documents, abuse of power, misappropriation and fraud,” he said. “However, examining these together reveals a huge series of fraudulent transactions, depriving the local government of tens of billions of forints in revenues.” Juhász was elected to the District 5 general assembly in October 2014.

The politician called the situation “untenable”, and thus it was “obvious” that interim local elections would have to be held in the district.  Juhász demanded the immediate resignation of District 5 mayor Péter Szentgyörgyvölgyi (by all accounts former District 5 mayor Antal Rogán’s hand-picked successor), district notary Dr. Zoltán Sélley (who previously ran the District 5 asset management company), and those district assemblymen who served under the previous administration, as well as those holding executive positions on any district committee.

Juhász said he was confident Hungary’s chief prosecutor, Péter Polt, would immediately launch an investigation as fast and transparent as the one launched against former Socialist MP Gábor Simon or other left-wing politicians.

(We wish we shared Juhász’ confidence, as Hungarian prosecutors have demonstrated little enthusiasm to target Fidesz politicians since Fidesz-KDNP returned to power in 2010.  This is particularly true in the case of Fidesz MPs  enjoying immunity from prosecution, such as former District 5 mayor Antal Rogán.–ed.)

He said the information and protocols used by his colleagues to uncover the “crime syndicate” continued to be available to every assemblyman.

The following two statements appear on the website of the District 5 local government:

On the basis of a complaint filed by Antal Rogán, the Metropolitan Tribunal ordered an December 4, 2014 an investigation of Péter Juhász for defamation.  The court ordered the procedure because the Together politician made insulting statements in connection with the official operation of the District 5 local government and Antal Rogán, even though the mayor counts as an official individual.

The District 5 local government already filed a complaint this summer against Péter Juhász for defamation.  Since then the local government has filed two more complaints against the Together co-Chair because of his obvious lies.  On December 4, 2014 the Municipal Tribunal issued a second level decision ordering prosecutors to launch in procedure against Juhász for making accusations.  There is a good chance Péter Juhász will be the politician most condemned in 2015 for defamation.

Juhász posted the following on his Facebook page on Monday:

At the outset:  The information used by myself was and continues to be at the disposal of the assemblymen of the past eight years.

I am filing a complaint of significant material damage caused by fraud committed by a criminal syndicate.

Please share this so that it gets to everyone!

I call on Mayor Péter Szentgyörgyvölgyi and notary Dr. Zoltán Sélley to resign with immediate effect!

I call on those members of the district general assembly who were also assemblymen in the previous cycle, as well as those who held executive positions on any committee participating in the organization of the sales, to resign their mandate with immediate effect!

The evidence was not misleading

I am reporting to authorities the real estate sales practice of the Budapest District 5 local government.  After analyzing many dozens of contracts it can be stated that no matter how many sales contracts we examined in each case we detected irregularities and illegalities in the sales process, and in every case the real estate was sold under market value.

However, if we do not examine the sales contracts separately, but in their totality, then it can also be stated that they set up and operated a system with the goal of creating an appearance of legally selling District 5 real estate without competition for a fraction of the market price to buyers they favored.

They continuously committed abuse of office, document forgery, misappropriation, causing many billions of forints in damages to District 5 residents.

I would rule out the District decision makers doing this without personal interest.  For this reason I am reporting to authorities the suspicion of fraud resulting in especially large material harm undertaken by a criminal syndicate.

The operation of the downtown corruption network

1.  The district government does not have a real estate management plan

When preparing the budget they do not calculate revenues from “the sale of non-residential real estate” and for this reason the budgets do not even provide for the use of such revenue.  The sale of the real estate does not take place according to the plans of the local government, but on a completely individual basis.  They sell those real estate for which someone expresses a desire to purchase.

The reason for this is that economically nothing justifies the sale of real estate in District 5.  Revenues arising from this were not necessary to balance the budget.

2. They tried to justify the necessity of the sale in the case of specific candidates in an ad hoc manner using “expert materials”

In the service of this was the CCA Tax and Financial Consultant Manager Zrt. contract.  This company tried to justify the necessity of sales with the use of one-size-fits-all expert opinions.  The first four pages of these “expert opinions” in every case were the same (copy/paste).  The one or two pages which follow list information about the real estate obtained from the local government and their assigned scores.  The only purpose it served was to document the necessity of the sale.

The company’s engagement raises a suspicion of misappropriation since it provided no real service.  It merely assigned scores next to information obtained from the local government.  The district government could be certain that the work was unnecessary because the calculation of the final price did not take the “expert opinions” into consideration.

3.  There were no appraisals.  They determined the price.

The company engaged to make the appraisal based its calculation on the so-called “zone average price” defined by the local government.  Everything is calculated based on that.  As a result, the local government can influence the final appraised price any way it likes.  So the role of the experts was to write down the number the district government said as being the correct value of the given real estate.

It is interesting to note that not one customer tried to negotiate.  In every case the buyer accepted the price given by the local government.  Nobody ever objected to the “appraisal”, which is a unique phenomenon in the history of local government and entirely unrealistic.

The vast majority of instances we examined the so-called appraisals were completed by the same company.  Through the end of 2013 this company was the Város FM Városgazdálkodási és Szolgáltató Kft. (City FM City Management and Szervice LLC.)  The owner of this company until January 2013 was Csilla Rubovszky, the current vice mayor, whose father, György Rubovszky is a Fidesz-KDNP Member of Parliament.  This is the György Rubovszky who on April 1st promised to launch a procedure against Rogán’s declaration of personal assets.

No such procedure was ever launched against Rogán.

The real estate was sold without a public tender by interpreting the right of pre-emption as though it took the place of soliciting competitive bids.  If one customer expressed an interest in purchasing a real estate, then first they rent it to him, then they set the price in the manner described, and then the renter was able to purchase the property for that amount, and nobody else.  Because he has a right of pre-emption, according to the district government.

The right of pre-emption, however. does not mean this.  Public property is to be offered for sale at a public bidding, with the bidder making the best offer winning.  Who has a right of pre-emption may purchase the real estate at that price before anyone else.

The system was such that the district government did not create a right of pre-emption but rather an exclusive right of purchase for the customer, who characteristically became the renter of the real estate a few months earlier.

Who received a discount and who did not was completely random.  In the vast majority of cases they automatically awarded the 30 percent discount to the tenant without ever examining whether the buyer satisfied the conditions.  One condition, for example, was that the tenant undertook during that year to pay a higher rent.  This was not even possible in the majority of cases because the buyer had only rented the real estate for a couple of months.  Such customers should not have been entitled to any discount.

Nor should they have given discounts to anyone with public arrears.  But these circumstances were never examined by either the district government committee or the general assembly.

6.  Customers were not required to pay VAT

Even though prescribed by law in the case of the sale or purchase of a non-residential real estate that the buyer pay VAT, the local government did not ask it.