Politics has taken over Hungarian media 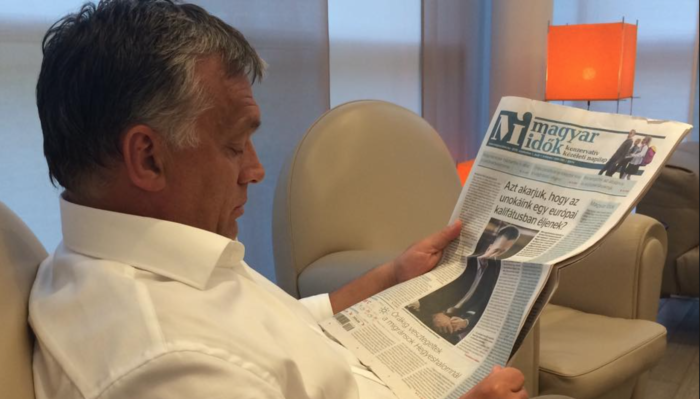 The Hungarian media market has undergone a complete restructuring since Fidesz returned to power in 2010, as politics has come to directly influence media like never before. Below are some of the more noteworthy examples of how ownership has been used to squelch independent media in Hungary.

Business weekly Figyelő recently announced that it was setting up a three-member editorial board to replace outgoing editor-in-chief Gábor Lambert. The chairman of the new board is Tamás Lánczi, a researcher at the Századvég institute—a think-tank close to Fidesz and the government. The other board members are Fidesz MP and former undersecretary for culture László L. Simon, and program director of the House of Terror Museum Gábor Tallai. The magazine’s publisher was undergoing liquidation last year when it was acquired by House of Terror director Mária Schmidt.

Simon told conservative daily Magyar Nemzet that he did not see any conflict of interest in his sitting on the editorial board as a member of parliament since “we do not want to publish an independent newspaper.” He said it is not the owner’s expectation that the magazine be politically neutral, but rather “that the publication reflect certain values.”

In recent years public media has increasingly become the purveyor of government propaganda. One public media programming director was fired for fabricating a report.

In 2011 the Swedish owners of important print daily Metropol, which was distributed free of charge at transportation hubs, sold the publication to Károly Fonyó, a business associate of Lajos Simicska. The publication was funded almost entirely from government advertising until February 2015, when Simicska fell out of favor with prime minister Viktor Orbán. In addition to losing government advertising, plus state- and municipally-owned company advertising, the Budapest Transportation Company (BKV) terminated its contract with Metropol, thereby depriving the newspaper of its most important means of distribution.

Daily online vs.hu was launched in 2013 (the same year as the Budapest Beacon), and continued to expand through Spring of 2015. The website never denied reports that the owner of its parent company was Tamás Szemerey, the cousin of central bank governor György Matolcsy. In Spring of 2015 it was revealed that the daily online had received HUF 600 million (USD 2.2 million) worth of grants from foundations set up by the central bank under Matolcsy. The fact that this had not previously been disclosed caused many of its writers to resign in protest.

In July 2014 leading daily online origo.hu was completely restructured after a significant part of its editorial staff resigned in protest over the termination of its editor-in-chief following the publication of a series of critical articles concerning  taxpayer-funded trips taken abroad by János Lázár while he was undersecretary at the Office of the Prime Minister.  Since then the publication has been run by L. Ákos Pálmai.

At the end of 2015, Origo’s publisher was purchased by the aforementioned Tamás Szemerey’s New Wave Media Group. The purchase was funded with a loan from the Hungarian Trade Bank (MKB) which had recently been acquired by the state.

In September 2015 it launched pro-government online daily 888.hu with Gábor G. Fodor, the former strategic director of the government-aligned Századvég Institute, as editor-in-chief.

In the Fall of 2015 Hungary’s second-largest commercial television station was sold to government film commissioner and casino magnate Andy Vajna. The purchase was funded in large part by a HUF 11 billion (USD 37.9 million) loan from the state-owned Eximbank. Since then it has launched eight new channels. Furthermore, its news programs have been completely restructured, with the position of news director being given to the girlfriend of Viktor Orbán’s press officer. As in the case of other pro-government media, TV2 relies primarily on government advertising for the vast bulk of its revenues.

Hungary’s leading commercial radio channel Class FM was stripped of its frequency in November 2016. One of two commercial radio stations owned by Simicska, Class FM had been launched in 2009 using a frequency which formerly belonged to Sláger Rádió, but became another casualty of government attempts to displace Simicska from the media market.

In addition to his acquisition of TV2, Andy Vajna branched into radio by launching Radio 1 in 2016. With Class FM going off the air in November 2016, Radio 1 became the only commercial radio station with anything approaching national broadcast coverage, which it achieved by concluding a series of licensing deals with other regional radio stations. Only government radio stations such as Petőfi Rádió and Kossuth Rádió are licensed to broadcast nationally.

In the Fall of 2016 the print tabloid Ripost was launched. The owner and editor-in-chief is Miklós Ómolnár, the former director of Story Magazine. Although the publisher cannot be connected directly with individuals close to the government, when not regurgitating “news” from TV2, Origo and 888.hu, Ripost frequently features articles that attack opposition politicians.

18 county papers are published in Hungary, collectively accounting for the vast majority of print circulation in the country. Until September 2016, all 18 were owned by four different companies when the largest owner, Mediaworks, acquired the second-largest owner, Pannon Lapok Társaság, whose media holdings included Hungary’s largest and most important independent print daily, Népszabadság, along with its online edition, nol.hu.

Mediaworks was subsequently sold to a Hungarian company linked to Lőrinc Mészáros, a Hungarian entrepreneur (who happens to be the mayor of Viktor Orbán’s home town of Felcsút) who owes his meteoric rise to success primarily to his close relationship with the prime minister.

In December Mediaworks’ new owner announced that no attempt would be made to resuscitate Népszabadság.

In the final months of 2016, Mészáros acquired Echo TV from Gábor Széles, the publisher of pro-government print daily Magyar Hírlap. With this, Viktor Orbán realized his plan of wresting control of key media outlets from various Fidesz oligarchs and launching a new pro-government media empire owned by members of his inner circle to rival that of Lajos Simicska.