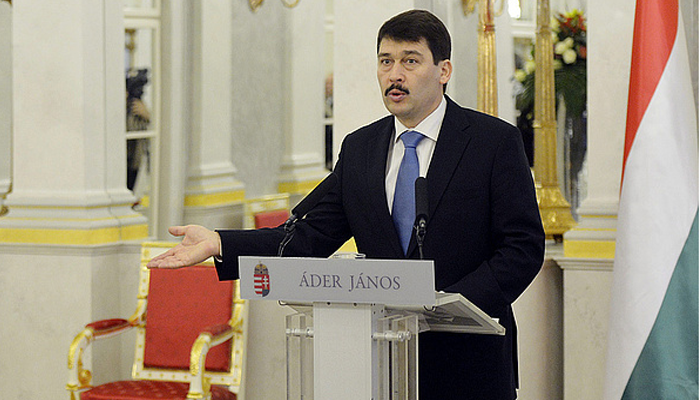 On Friday President János Adér formally referred a law passed by the Hungarian National Assembly on December 6 to the Constitutional Court for review.  Specifically, he requested that the Court invalidate the law because it violates Hungary’s Fundamental Law.

His action comes less than a week after it was announced that Áder does not plan to seek a second term as President (of the Republic) of Hungary.

State news agency MTI reports that, among other things, Áder complained that the law was passed by a simple parliamentary majority even though it modifies a cardinal law which, by law, requires a two-thirds majority vote.

The law provides for a new body to be created, the government administrative upper court, even though it is not possible to create a new court with a simple majority.  In Áder’s opinion, although an existing court – the Capital City Court – is to fill the role of the new court, it is still the case that the law creates a new court and assigns to it classes of cases currently falling under the jurisdiction of other courts.

In addition to the manner in which the bill was passed on December 6, Áder objected to the provision according to which the Capital City Court would serve as an autonomous state administrative organ responsible for adjudicating lawsuits related to the administrative activities of the Government Office (kormányhivatal).

He argues that the law overrides the media law assigning lawsuits involving the National Media and Broadcasting Authority to the Capital City Court for Government Administration and Labor Matters.  President Áder believes the same constitutional problem is posed by the point which assigns jurisdiction for election-related matters to the government administration upper court, when according to the current election law the second-level court depends on the seat of the election committee in question.

Áder’s petition mentions the Constitutional Court’s earlier opinion stipulating that the provisions of a cardinal law cannot be circumvented by those of a law passed with a simple majority.

Minister of Justice László Trócsányi has sought to justify the new Litigation Code by claiming the current system “is not capable of providing adequate judicial protection required by the constitutional principles of rule of law and division of powers, as well as Europe law.”

In an interview given to the Budapest Beacon, Transparency International legal director Miklós Ligeti criticized the government for planning the creation of a higher court in secrecy.