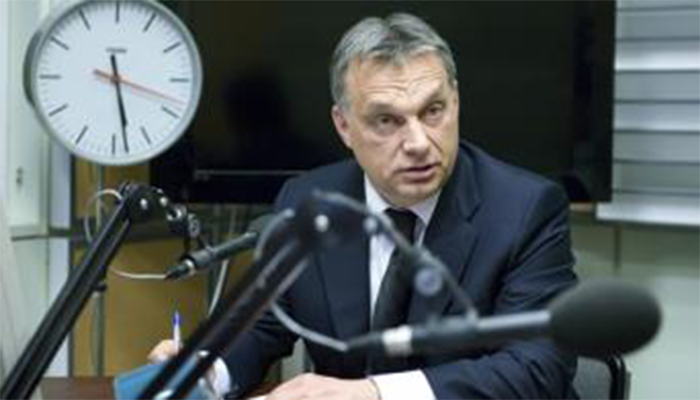 Hungarian Prime Minister Viktor Orbán denied that austerity measures will be introduced in the 2015 budget, “no matter how much the Socialists want it,” in his weekly interview on state-run Kossuth Radio’s politics show “180 perc” (180 Minutes).

Opposition MPs identified as a “clear austerity policy” the announcement of spending cuts  of HUF 1.7 trillion (USD 7.03 billion) – or 5.5% of Hungary’s economic output – last Tuesday. Varga told a conference on corporate financing organised by daily Napi Gazdaság that the government would stick to its budget deficit target of below 3% of economic output for the rest of its governing cycle. He added that public spending needs to be gradually reduced to 45% of GDP and redistribution should be narrowed, while the year-end public debt should be continually shrunk.

Dialogue for Hungary (PM) co-leader Gergely Karácsony said Hungarian society “would be unable to tolerate cutbacks on such a scale. If there is indeed such a plan, it will involve drastic pension cuts and the introduction of education and health care fees,” he added. If Orbán keeps silent about this issue, it would be tantamount to an admission, he said.

Politics Can Be Different co-chair Erzsébet Schmuck reacted that “Varga’s plans can only be likened to Lajos Bokros’s 1995 austerity package.” Orbán denied such interpretations. He claimed the government’s “unorthodox methods” had “led the country out of the crisis in 2010,” and does not plan to give up this approach.

The reactions of former finance minister Lajos Bokros and former MNB director Peter Ronai can be read here and here.

On US president Barack Obama’s recent criticism of the Hungarian government’s crackdown on Norway Fund-recipient NGOs, Orbán said “we have acknowledged the president’s opinion… but can find no factual evidence that can justify such claims.”

On whether Hungary will continue its gas supplies towards Ukraine, Orbán said while “Ukrainians can always count on Hungary”, their reserve gas supplies can be fulfilled through pipelines across Slovakia. He argued that Hungary’s households need the gas reserves.

Hungary’s gas pipeline network operator FGSZ initially said it had suspended supplies to Ukraine indefinitely for technical reasons. However, Orbán admitted having discussed the schedule for filling Hungary’s natural gas reserves with Gazprom CEO Alexei Miller in Budapest last month. Orbán said “60% of our gas storage capacities are now full, yet we will soon need more. Miller has promised to supply us this.”