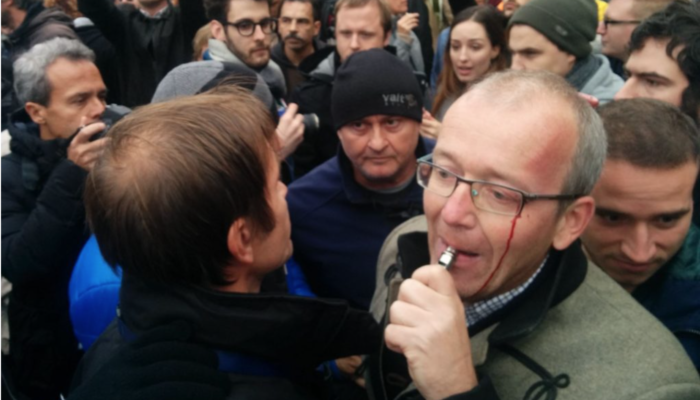 A private security company hired by the government did not allow numerous people to enter the official state commemoration event celebrating the 60th anniversary of the 1956 Hungarian uprising at Kossuth Square on Sunday, reports index.hu.

The public event drew thousands to listen to an address by Prime Minister Viktor Orbán. A large faction of protesters also came to the square outside Parliament to demonstrate against the government by blowing whistles and horns during Orbán’s speech. It was these demonstrators who were singled out by security guards, and many had their bags searched or were otherwise refused entry.

The security company, Valton Security (a favorite service provider of the ruling Fidesz party), explained its actions by saying it didn’t want demonstrators to disturb the event.

Among those turned away was Együtt (Together) party co-chairman Péter Juhász, who had organized the counter-demonstration called “Whistle concert for Orbán.” Juhász called police, complaining that he was being prevented from attending a public event. However, the police explained that Valton Security is a private company entrusted with security operations, and therefore was authorized to decide who could enter.

Juhász has filed a lawsuit against the Prime Minister’s Office, saying on his Facebook page that “every citizen has the right to take part in a state celebration financed with public funds. The state has no right to determine who can or cannot attend the event. There is no such thing as ‘good’ or ‘bad’ citizens, there are tax-paying citizens who, like myself, are paying for the ceremony. The reason we went out to the event was to express criticism of Orbán, and he must tolerate that. He must tolerate that because he is only a public figure, not a king.  Because we have the right to criticize him.  Even if he can’t handle it.”

Sunday’s events were not the first time discriminatory security practices have infringed on the rights of the public to participate in public events in Budapest. Similar controversies erupted in both 2008 and 2009 during the Socialist government of Ferenc Gyurcsány. During those years’ March 15 celebration events, a different private security company only allowed people access to the event area on Múzeum körút after a search of their personal belongings. A story emerged of a family only being permitted to attend after security guards confiscated their baby’s bottle.

The incidents led to numerous complaints from citizens, and the case was turned over to then-ombudsman Máté Szabó. He found that on March 15 of 2008 and 2009, “serious constitutional concerns were raised by the practice of the state entrusting personal and property security (so-called security guard) activities to private firms instead of to the police during state or municipal events.”

Szabó argued that there was no essential problem with conducting general security procedures at state-sponsored events, so long as they were conducted proportionally among all attendees and responded to “significant, concrete threats” to the safety of the event. Szabó concluded that the police, and not private security contractors, should be charged with providing security at events organized by the state or municipal governments.

“If security guards conduct entrance procedures for state or municipal events, then the potential for abuse is increased, and in my opinion the tools are missing for guaranteeing the general proportionality of the police actions of screening the bags of entrants,” the ombudsman wrote.

Fidesz politicians, feeling their constituents’ rights had been violated by the private security guards, lined up behind Szabó’s findings. They argued that “a serious national security question” had been raised, and the incidents were “a violation of rights that should be underlined twice.” Then-Fidesz MP Ilona Ékes said “everyone is entitled to human rights regardless of whether they are members of the opposition or the governing party.”

Current Minister of Human Resources Zoltán Balog was the president of the Parliamentary Committee on Human Rights in 2009. He authored a letter on behalf of Fidesz in March of that year to National Chief of Police József Bencze. In the letter, he agreed with Szabó’s findings, and asked the Chief of Police, “why weren’t the police capable of providing security operations for the entrance to the National Museum garden?”

“Do you agree with me, Mr. General,” his letter continued, “that the above-mentioned security guards arbitrarily restricted the citizens in practicing their constitutional rights of freedom of assembly, and that procedures thereby could arise concerning suspicion of a crime?”

In light of Valton Security prohibiting certain undesirables from entering Sunday’s event at Kossuth Square, it is clear that Fidesz has reconsidered its position on who should be responsible for event security and what freedom of assembly really means.

Orbán responded to questions from hvg.hu about his opinions on the security firm barring some people, and about cases of physical violence against whistle-blowing protesters and journalists.

“Legal authorities will deal with legal questions,” Orbán said, unable to formulate a condemnation of the physical attacks doled out by his supporters. Asked again about the role of Valton Security, Orbán responded thoughtfully: “It was a worthy commemoration, for which we should thank everyone that participated, the organizers, the performing artists, everyone who came and bowed their heads with dignity, and the security company you mentioned too.”