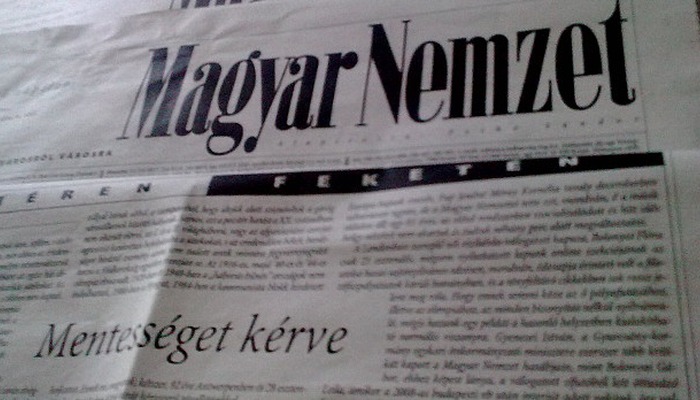 The right-wing daily Magyar Nemzet announced the dismissals of 30 journalists on Monday. Editor-in-chief Gábor Liszkay said the dismissals had been necessitated by the “persistent deterioration of market conditions”. The newspaper’s daily circulation has halved, to 37,000, over the last decade. It will now amalgamate its online and print editorial teams.

Among the victims of the downsizing is István Lovas, the daily’s Brussels correspondent whose speciality is international conspiracies against Hungary. He became well known in the local expat community when he sent an abusive message to the mailing list of the Hungarian International Press Association HIPA, calling foreign journalists “f.cking sh.theads” for ignoring left-wing scandals, with the BBC correspondent Nick Thorpe given the dubious honour of being one of the “honorable exceptions”.

The Beacon reacted to Lovas’s pronouncements with this open letter, to which we never received a response.

Lovas will reportedly still contribute to the newspaper as a freelancer.

As well as Lovas, the correspondents Miklós Ugró and Mathild Torkos are also seen as close to Prime Minister Viktor Orbán and Chancellor of the Prime Minister’s Office János Lázár.  The sackings are widely seen as collateral damage in the ongoing power struggle between Orbán and the newspaper’s Fidesz oligarch owner Lajos Simicska. However, despite receiving HUF 1.5 billion in state advertising from early 2013 to July 2014, the paper has dropped its unquestioning loyalty to Fidesz. In recent months it has run critical articles on matters including the allegedly corrupt business dealings of National Development Minister Miklós Seszták – even calling for his resignation – the secret meetings with bankers of Orbán and Lázár, and Budapest mayor István Tarlós’s battles with the government.