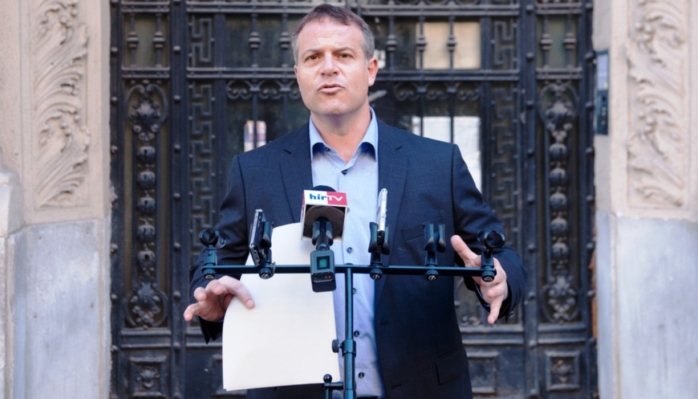 Pro-government media is up to its old tricks again, this time accusing Együtt VP Péter Juhász (Together) of being in cahoots with underworld boss Tamás Portik.

In June Portik testified that he had personally paid former Budapest District 5 mayor Antal Rogán a EUR 10,000 bribe.  Portik had been called by the defense to testify against Rogán in a defamation lawsuit brought by the Fidesz politician against Juhász for repeatedly referring to him as “a criminal.”

Traveling abroad on “urgent government business” to avoid having to face his accuser in court, Rogán claimed that Portik was not a credible witness on account of his criminal record.  Prosecutors evidently agreed and dropped their investigation, filing a charge of perjury “against an unknown assailant” instead.

It appears that Rogán, now Hungary’s propaganda minister, is trying to turn the tables on Juhász, using pro-government media outlets to accuse the anti-corruption crusader of being in the employ of the former underworld boss.  In an interview broadcast on Thursday,  convicted felon Attila Menyhárt told TV2’s Tények (Facts) that Juhász is “Portik’s man” and that the criminal hired him in an attempt to overthrow the government.

Claiming to have befriended Portik in prison, Menyhárt told TV2 that Portik confided in him that he continued to “pull the strings” while in prison, and that Péter Juhász was in his pay.

Juhász took to Facebook and vehemently denied the accusations, vowing to sue anyone who accuses him of colluding with Portik, including the government-aligned TV2.

“It’s truly frightening what these criminals will allow themselves to do,” Juhász wrote on his Facebook page. “I’m not thinking of the prison mate, who is obviously saying this because of some reward or threat, but of the vile purveyors and producers of Fidesz propaganda. Of course, I’ll sue them to pieces.”

When Juhász called Portik in his defense, the convicted criminal claimed he had personally delivered the EUR 10,000 bribe to Rogán in connection with a real-estate scam in the 5th district during Rogán’s tenure as mayor there.

Beyond calling him as a witness in the defamation trial, Juhász denies having any connection to Portik whatsoever.  Juhász said he once met Portik’s secretary so as to give her copies of various articles that had appeared on the internet.

“Fidesz is claiming that Portik pays may which is hard to accept without smiling” says the opposition politician in a video posted to Facebook Thursday afternoon.   The Budapest District 5 assemblyman points out that among Pesti Srác’s sponsors is Fidesz’s parliamenary delegation, the Minister of the Interior, and the District 5 city government.

Juhász says he has nothing to do with the convicted criminal and that he never met him outside of court.  “Even if he wanted to give me money, I wouldn’t accept it.”

Juhász believes media outlets close to Fidesz are attacking him for addressing the issue of prime minister Viktor Orbán’s accumulation of assets.

“Orbán today is the richest Hungarian” says the opposition politician.  “The only criminals I meet are downtown Fidesz assemblymen.  They are the ones who help criminals steal downtown real estate under Antal Rogán’s leadership” he said.

Following an interview broadcast on TV2 in which a recently freed felon claims the mafia boss told him that Juhász was in his pay, Pesti Strácok published an article bearing the sensation title “Criminal funds politician!”.

“TV, Origo and Habony’s rag continue to fabricate news.  Naturally I will demand a correction from all the rags, and I will sue all of the disgusting propaganda promulgating organs” he wrote on his Facebook wall.