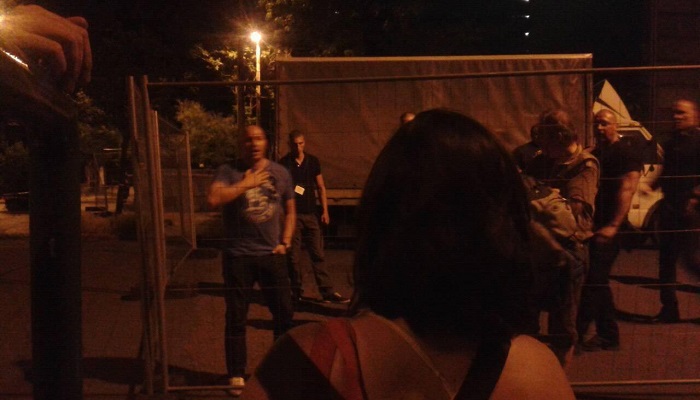 Members of Ligetvédők (Park Protectors) were camping next to the Museum of Transport, one of the buildings to be demolished as part of a greater project transforming the City Park. The Liget Budapest project plans to erect four new buildings in the park, including the new National Gallery (relocated from the Budapest Castle), the Hungarian House of Music, Museum of Ethnography and Városliget Theatre. The project has been criticized for encroaching on one of the most used green spaces in the city, and for its plans to cut down 3% of the park’s 6500 trees.

According to the group’s Facebook page, on Sunday night a group of security guards appeared out of nowhere and started building a fence around the Museum of Transport. Hungarian news website 444.hu reported a small fight broke out between the 30-40 guards and 20 members of Ligetvédők. Videos show the protesters being escorted out of the premises. Police were called but no arrests were made.

On Monday morning, Városliget Zrt. issued a statement saying the demolition of the Museum of Transport has begun.

“During the demolition, the premises need to be fenced off as the works are potentially life-threatening,” the statement said, claiming the project had all necessary licenses.

Demonstrations continued on Monday, with some activists climbing on machines to hinder the works. Ligetvédők issued a statement calling more people to help.

In June, members  occupied a building on the area of the former open-air bar and restaurant Kertem to protest against the development.