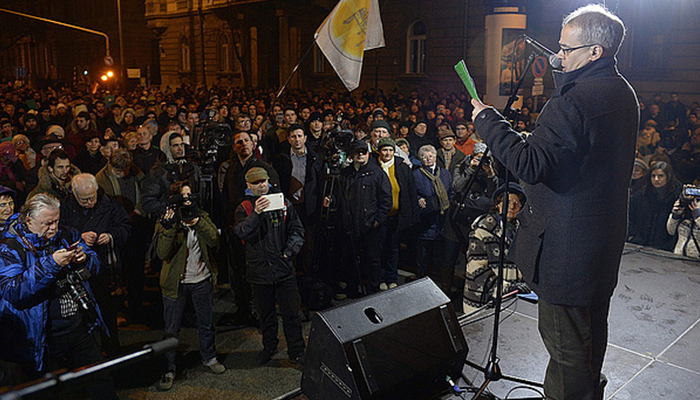 Demonstrators: “Theft runs country-wide. We are with you Andras Horvath!”

An estimated 1000 people demonstrated Saturday afternoon in front of the Budapest offices of the National Tax and Duty Authority (NAV) in support of NAV whistleblower Andras Horvath.  Hvg.hu reports that from Szechenyi street protesters marched to Parliament and then to the Ministry of the Interior carrying signs, banners, and green folders chanting “theft runs country-wide, we are with you Andras Horvath”.  One of the signs called for police to conduct a search of NAV premises.

Protesters carried green folders symbolic of the one confiscated by police during last Thursday’s early morning raid on Horvath’s apartment allegedly containing proof of systematic tax fraud on the part of large companies to which NAV turns a blind eye at an annual cost to Hungarian tax payers of some HUF 1 trillion (USD 4.6 billion), according to Horvath.

The demonstration was organized by several NGOs, including the Network of University Students (Haha) which organized massive demonstrations at the end of 2012 protesting the defunding of higher education and government plans to introduce tuitions.

The organizers’ Facebook page invited people to show that Horvath “is not fighting the battle against corruption alone”.  It further demanded that political parties not obstruct the formation of a parliamentary fact finding committee and that independent state auditors investigate the matter.  “We must send a message to every intimidated employee of the tax authorities that we are all with them.  It is necessary for as many as possible to stand up and say: I too have a green folder.”

Yesterday’s demonstration was significantly larger than the one organized spontaneously last Thursday after police raided Horvath’s apartment and confiscated documents, hard-drives, and computers in addition to the green folder.

Horvath claims the police also confiscated a notebook containing the names and contact information of members of the Hungarian press he contacted.

Yesterday NAV announced that it would not release the report prepared over the course of a week-end in mid-November concluding there was no basis for Horvath’s claims.  NAV subsequently reported Horvath to the authorities for defamation and abusing privileged information.

Legal experts question whether there can be grounds for either charge as Horvath has refused to divulge any names or provide particulars to the press and has not sought to benefit personally from the confidential information in his possession.  Horvath, whose repeated attempts to present his findings to parliament have been frustrated by Fidesz MPs, has yet to be interviewed by police or indicted by prosecutors.

Shortly after NAV’s announcement, Politics Can be Different co-chair, Andras Schiffer, announced his intention to file suit against Minister for National Economy, Mihaly Varga and NAV for refusing to release the report.