Protesters to hold “Day of Public Outrage” across Hungary, Europe 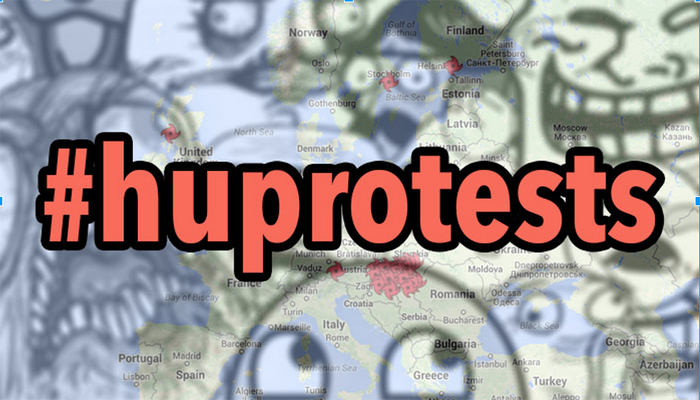 Last Sunday anti-corruption protest leader Gábor Vágo demanded the government ask the European Commission to conduct an independent investigation of the National Tax and Duty Authority (NAV).  He also called on NAV president Ildikó Vida and three other high-ranking NAV officials to resign.  Vágo warned that, should either fail to take place within one week’s time, further demonstrations would be held across Hungary o Monday, November 17.

Although the public prosecutor’s office has allegedly opened a formal investigation into alleged abuses, on Friday Prime Minister Viktor Orbán dismissed all allegations of corruption as an unwarranted provocation on the part of the United States and said he would have to think long and hard before accepting the head of NAV’s resignation, because Hungary’s “national sovereignty” is at stake.

“The Day of Public Outrage” organizers offered the following the explanation of the protests on Facebook:

We will not give in to communication tricks. We will not allow our freedom of information to be curtailed, and we want our opinions to matter. We will not tolerate being looked down upon and being treated unequally!

We do not want the internet tax!

We do not want government corruption!

We do not want excessive taxation!

We do not want this kind of foreign policy!

We want to be part of Europe!

Protests are also scheduled to take place in the United Kingdom at Trafalgar Square in London, Millenium Square in Bristol and Oban (Scotland), in Germany at the Pariser Platz in Berlin, Luxemburg, Amsterdam, Vienna, Stockholm, Helsinki, Malta and elsewhere.

Protest organizers in the United Kingdom issued a brief explanation on Facebook giving insight to the what and why of the international protests.

“Our government at home started to follow a very dangerous road.  They are against liberal democracy. They praise Putin and dictatorships. They try to cut the freedom of speech, and demonise everyone who’s against them … After they revealed a plan to introduce a tax on internet usage, Hungarians started to protest all across the country. The government got scared and dropped the plan, but the protests are still on. We are showing our solidarity. And you are more than welcome to do so if you are around!”

The Budapest Beacon will provide live coverage of the events in English and Hungarian with the help of its sister publication, Abcug.hu.