“Today we are not teetering on the edge of a cliff but plunging into the depths.” – Kata Törley, civil activist, Tanitanék (I would teach) movement

Braving the bitter cold, hundreds of teachers gathered in front of parliament yesterday evening to demand the resignation of Minister of Human Resources Zoltán Balog, the creation of an independent educational ministry and a new law on public education.

The demonstration followed a press conference held that day by the Civil Public Education Platform, where the organization announced the release of an 84-page road map to educational reform entitled “There is a Way Out.”  The demonstration was organized by the leaders of the “I would teach” (Tanítanék) movement.  The following announcement was posted on the movement’s Facebook page earlier in the day:

While those from the countryside cannot attend the assembly by candlelight in the Kossuth square today, anyone in any settlement in the country can express their protest by wearing a black or checkered coat, dress, shirt, or attaching a black ribbon to their coat, bag or car antenna, photographing it, and sending it to the event’s Facebook page.

Parents, children and teachers should also wear black or checkered clothing and tie black ribbons to the gates of the schools, gardens and windows!  Let us express that we have had enough of the lies, of the intimidation of the students, and the overburdening of students and teachers.

Dear teachers, students, parents, grandparents, Hungarian citizens!  We ask EVERYONE who believes that it is not the children and the teachers who are responsible for the failures of education policy and its systematic mistakes to stand beside Hungarian educational freedom.

We must not allow them to deprive our children and society of its future!”

Standing atop a small podium erected in the middle of Kossuth square, Tanitanék activist Kata Törley welcomed hundreds of protesters by telling them they were gathered to “commemorate in a dignified manner the fact that five years ago tonight, in this building the public education law was adopted that cast public education into depths never previously seen.”

Vocational school student Petra Ildikó Német told the crowd she felt like “an experimental rabbit” and that “continuous changes had resulted in chaos.” She criticized the introduction of mandatory summer student work, saying more and more students found themselves competing for a very limited pool of suitable student work opportunities. 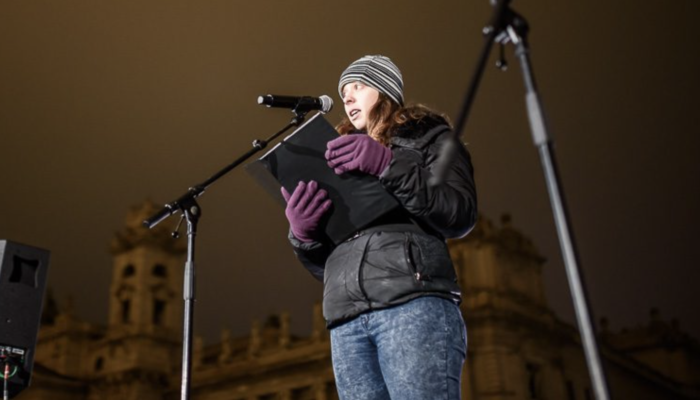 “We are expected to decide at the age of 14 what we want to do with our lives,” Német said. “Thereafter, we cannot change our minds. We have to commit ourselves to a trade with which we are not even familiar,” she added.

Calling Hungary’s educational system “a failure” she warned that most students were under great stress.  “Why is it necessary to wage war?  We would like an educational system that allows us to think and decide, where they don’t operate us like machines that can be controlled.”

“They humiliate, extort, and divide us”

In a moving speech, trade school teacher Blanka Sulyok called the failure of growing numbers of students to complete their high school studies “a human tragedy.”

Sulyok said ill-conceived reforms rolled out after the adoption of the public education changes at the end of 2011 forced teachers to choose between teaching the new framework curriculum and “taking the students’ interests and individual needs into consideration.”

She complained that more lessons, larger classes and excessive administrative burdens had made it virtually impossible for teachers to perform their jobs conscientiously. “It’s a bad system which pits requirements against conscience, in which the two exclude one another rather than building on one another,” Sulyok told the crowd.

“They humiliate, extort and divide us,” she complained, cautioning teachers against passing on to students an attitude of blind respect for hierarchy which teachers experience in the current system.

Leading Tanitanék activist Oliver Pilz then took to the small stage, opening his speech with a few rhetorical questions for the crowd.

“What are you doing here in the cold five days before Christmas?  Don’t you have anything better to do?  Have you at least dressed warmly?” 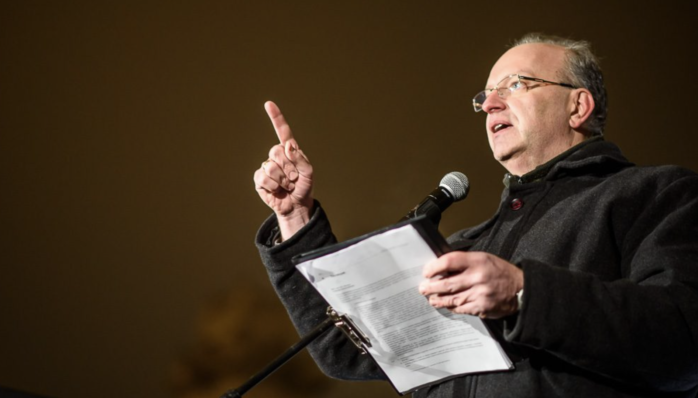 He criticized the government’s attempt to blame Hungary’s poor PISA results on teachers and students, or to downplay their significance.

“We listen in astonishment to our country’s leaders to whom it has not occurred that the problem is in the system they created five years ago,” Pilz said.

Announcing that it was “shameful what they do” he called on the crowd to face parliament and chant “shame.” Against the background chorus of “shame”, Pilz pointed out that “in the country that produced so many great mathematicians and scientists, and which boasts many Nobel Prize winners, we inundate students in pointless and boring data. We are the owners of a beautiful language and yet one quarter of us are functionally illiterate.”

Pilz criticized the undersecretary for public education for remaining disinterested in the opinions of educators despite tens of thousands of them having taken to the streets. He criticized Hungarian society for failing to “come together and demand immediate changes.”

“The greatest shame is that we are doing this to our own children,” said Pilz, who warned of dire consequences “if a radical change does not take place in Hungarian education, if the government is not willing to confront the failure of its policies, and if there is no genuinely democratic dialogue” between government officials, teachers and parents.

“The future economy will be built on castles in the sky”

Pilz warned that Hungarian children would enter the world labor market lacking the skills to compete unless public spending on education was increased to 6 percent of GDP. The civil activist called for an immediate reduction in the number of hours and class size, the restoration of school autonomy and the restoration to municipalities of responsibility for maintaining schools, warning that “otherwise, the culture and diversity of smaller communities will be destroyed.”

“There is a way out”

Pilz was followed by Civil Public Education Platform (CKP) spokesman István Nahalka, who took the stage to present a detailed road map to reforming education bearing the title “There is a way out.” He said the 84-page “checkered book” addresses the key questions pertaining to Hungarian public education. The other two publications posted to the organization’s website (ckpinfo.hu) include a 13-page “notebook” and a 2-page “table” summarizing the study’s main findings.

Halka explained that whereas the 12-point CKP platform issued earlier this year summarized what should be done immediately, the “checkered book” attempts to identify and address the root problems and explain what must be done to fundamentally change Hungary’s educational system, including the importance of preparing decisions in a democratic manner in consultation with education stakeholders.

Claiming CKP had managed to do what the government had failed to do for the past six years, Halka said his organization would seek the opinion of teachers over the next few months. Emphasizing that the proposed solutions were not the “be all and end all,” Halka said “what’s important is that we find one another’s voice, discuss this and collectively work out a better educational system.”

“Don’t mess with our children!”

Taking the stage for a second time, Tanitanék activist Kata Törley told the crowd that the 2011 public education law and the concepts it embodies has failed.  “Nobody can say we did not warn them,” she said, recalling the many protests, petitions and dire predictions issued by various organizations back in 2011.

“Everything has become exactly as intolerable as we said it would,” Törley said. “Today we are not teetering on the edge of a cliff but plunging into the depths.”

She called for the resignation of Minister for Human Resources Zoltán Balog, who she said bears much of the responsibility, having presided over the destruction of public education for the past five years.

“You have repeatedly demonstrated your incompetence. You have not only failed as an expert but as a minister and a person,” said Törley, adding that “if he doesn’t leave on his own, then it is his boss’ job to send him away.”

In addition to the appointment of a new minister, she called for the creation of “an independent, expert-based ministry of education” to replace the current secretariat “run by incompetent authorities lacking necessary qualifications who hide behind Balog’s back.”

Finally, she demanded the drafting of a new public education law that is expert-based and respects the democratic spirit underlying the “checkered book.”

In her closing statement, Törley announced that the next protest would take place on February 1 outside the Human Resources Ministry to “evaluate progress and decide how to proceed.”

At this point, the demonstrators marched peacefully to the ministry and posted their demands on the front door. 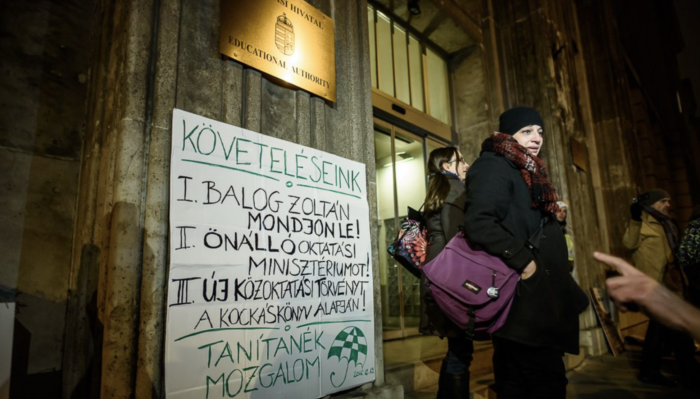