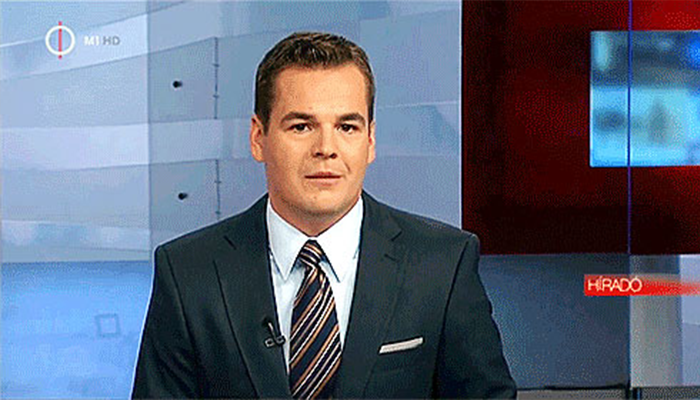 In a minute-long speech broadcasted at the end of the Saturday evening news, state television news presenter Balázs Németh criticized “online news portals” critical of the government for allegedly failing to cover a series of “positive news” about the policies of the Fidesz government, including the fact that Moody’s had upgraded Hungary’s outlook to “stable”.  He also accused “government critical” news publications of “silencing differing opinions”.

Probably the strongest indication of the once again expressly good news about the Hungarian economy is that many internet publications are silent, or attempt to be silent, about Moody’s decision. These are the critical news-portals, that extensively report on everything that they think is bad for Hungary or the Hungarian people. But they did not have an easy week. They needed to be silent on a number of news items: On Tuesday the European Commission upgraded its predictions for Hungary. On Wednesday it became clear that shop traffic has increased.  On Thursday the performance of industry improved.  And on Friday it was revealed that Hungary’s government paid back the latest installment of the EU loan taken by Gyurcsány government. In the end, came the favorable report of Moody’s.

The live editorial was characterized as unprecedented even by the pro-government online media. It is a widely accepted fact that since 2010 public MTV television has been heavily biased towards Fidesz. Yet inserted opinion pieces within the news program itself were not frequent occurrences even in these circumstances. András Stumpf, one of the main columnists of pro-government Heti Válasz, remarked on his Facebook page that “Whoever is responsible for this, is the shame of his or her trade”.

Liberal 444.hu later revealed that Balázs Németh himself was a beneficiary of Fidesz nationalization. His wife owns two national tobacco franchises in Nagykovácsi, a small town north-east of Budapest.