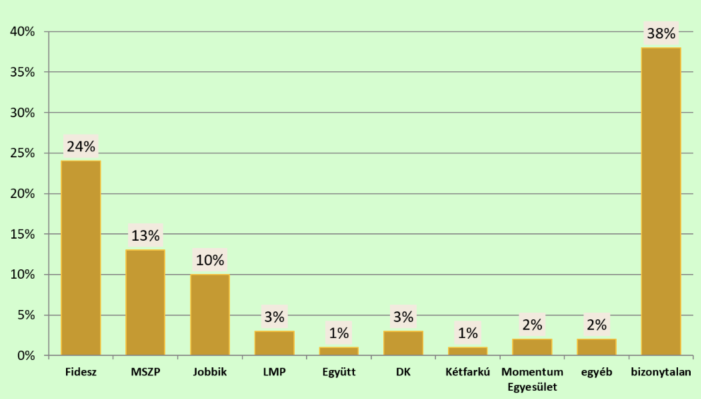 Fidesz’s support decreased by one percentage point while Jobbik and the Socialists (MSZP) have been stagnating since July according to pollster Publicus, reports Magyar Nemzet.

Publicus puts Fidesz’s support at 24 percent of the entire population. MSZP’s support among the entire population decreased by one percent in July after five months of stagnation and currently stands at 13 percent.  At 10 percent of the voting age population, support for Hungary’s radical right-wing Jobbik has not changed since July.  Jobbik has been in the 10-11 percent range for a year now, however activity of Jobbik supporters has somewhat decreased recently.

Publicus Institution conducted the current representative poll between August 10 and 12 with the participation of 1003 people.

Meanwhile, Nézőpont has also presented the findings of its August poll, reports Index.hu. According to Nézőpont’s data, Fidesz stands at 30 percent among the entire population, while Jobbik and MSZP lag behind with 11 and 7 percent respectively. The government-tied pollster says Momentum and Politics Can Be Different (LMP) would barely clear the five percent threshold necessary to enter parliament.

Undecided voters remain the second-biggest group in the electorate after Fidesz voters, according to Nézőpont after conducting a separate poll on reactions to Gábor Vona’s remarks on pensioners. Based on Nézőpont’s data, 60 percent of the electorate rejects Vona’s statement about “Victorian” and “rancorous” pensioners. Even according to 38 percent of Jobbik voters Vona could have chosen his words better. However, any poll interpreted by Nézőpont should be taken with a grain of salt, as the pollster is owned by Orbán’s former legal aide and undersecretary of the Prime Minister’s Office Tibor Győri.

The other micro parties would not get greater support than two percent each, according to Nézőpont.