Putin now visits Hungary as often as he does Asian dictatorships 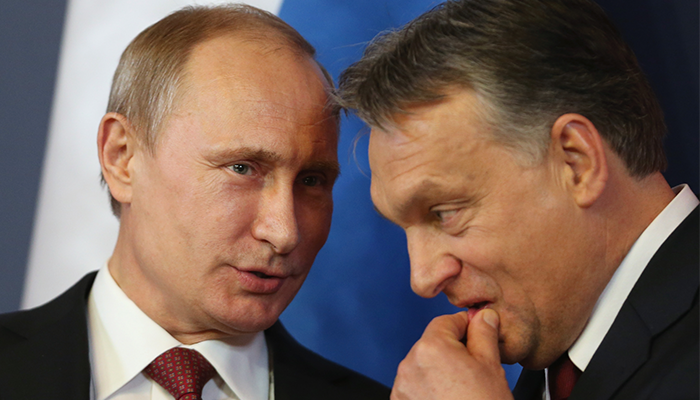 “It is extraordinary that two bilateral meetings would happen within one year with a great power.” – Péter Krekó

“Viktor Orbán deludes himself into thinking he’s an equal partner of Putin, but this is not true and it makes Hungary’s situation difficult” – Bernadett Szél, co-chair, LMP

Russian Federation President Vladimir Putin has visited Hungary for the second time this year. Officially he came for the World Judo Championships, held in Budapest, as he is the International Judo Federation’s honorary president. But since he was already here, he met Prime Minister Viktor Orbán and even brought along his ministers who negotiated with their Hungarian colleagues. Putin announced after the meeting that the construction of the new Paks nuclear plant, a Hungarian-Russian project, will begin in January.

On the day of the meeting, think-tank and consultancy Political Capital organized a conference that focused on Hungarian-Russian relations. In addition to the quote appearing above, Political Capital’s Péter Krekó observed that this was the Russian President’s fourth visit to Hungary since the annexation of Crimea in 2014, and the seventh since the Orbán government came to power in 2010. Putin only visits semi-dictatorships belonging to the Russian sphere of interest such as Kazakhstan and Belarus with such frequency. Meanwhile, Orbán’s meetings with important leaders in the European Union have become somewhat rare. The Hungarian government has just gotten into a diplomatic fight with the government of the Netherlands, an ally. What does Putin want from Hungary and why has he become such friends with the Hungarian government?

Political Capital conducted a poll in February about the opinions on Russia among the populations of the V4 countries. “The society is generally West-oriented,” said Péter Krekó. 61% of Hungarians had positive views on the EU, more than half of them on NATO, while only 20% of them had positive views on Russia. However, Vladimir Putin is a totally different matter, as his popularity is close to that of Viktor Orbán, according to the poll.

Meanwhile, German Chancellor Angela Merkel is not popular in Hungary at all.

The reason behind Hungarians liking Putin so much despite his war against neighboring Ukraine, parts of which are Hungarian-speaking, is a mystery. Nevertheless, it is clear that the Hungarian government is rather lenient with Moscow. Krekó illustrated this attitude with an example: a political scandal ensued after outgoing Dutch ambassador comments last week comparing the Hungarian government’s communication methods to those of Islamist terrorists. In response, Minister of Foreign Affairs and Trade Péter Szijjártó recalled the Hungarian ambassador to the Netherlands, a move that counts as rather strong in diplomacy. The Dutch Minister of Foreign Affairs has since apologized, but the Hungarian ambassador has yet to be sent back.

According to Krekó, another diplomatic affair took place last year: one of the main ideologists of Putin’s government called Hungary’s 1956 revolution a CIA-coup on Russian state-owned television. Even though the Ministry of Foreign Affairs summoned the Russian Ambassador to Hungary, the Ministry accepted the explanation that on Russian television, anyone can say anything.

“Now the Netherland’s apology is accepted rather reluctantly, which demonstrates the direction of Hungarian foreign policy,” said Krekó.

What does Russia want from Hungary?

“Russia is a great power and it orients itself towards other great powers,” said security policy expert Péter Tálas at the conference. The country’s aim is to weaken the values of the EU, of NATO, and of the entire Western sphere. In the expert’s opinion, Russia views the countries of the Central European region, Hungary among them, as no more than a tool.

According to foreign policy analyst Edit Zgut, the Russian government has four practical goals at the moment:

The Russian government tries to achieve these goals and expand its influence abroad with the most diverse tools possible. They use openly military tools, such as supporting the Ukrainian separatists, or flying Russian bombers along the borders of Western countries. These methods are less perceptible from Hungary, but the other tools far more so.

The Russian state has started to utilize a completely new method of influence in recent years, so-called disinformation warfare, which focuses on spreading news and promulgating fake news favorable to Russian interests on the Internet and social media. There might be around 80-100 websites in Hungary, mainly blogs, that spread Russian misinformation, said foreign affairs expert Beatrix Tölgyesi at the conference. Meanwhile, in the Czech Republic there are only 40 such sites.

This method is cheap and is able to achieve great results from a small investment, which makes it an effective method according to Tölgyesi. The only way to fight against it is education and raising citizen awareness. On the other hand, Péter Tálas said that Russian propaganda can also be effective in Hungary because the different Russian portals’ news and fake news are often referred to in the mainstream media. Tálas added that he had experienced Hungarian pensioners sending information originating from Russia to each other via email.

Nonetheless, Hungary is most visibly affected by Russian economical attempts at influence. According to Péter Tálas, several successful and failed attempts could be cited from recent years. It was an unsuccessful attempt, for example, when Russian companies tried to gain significant influence over Hungarian companies Malév or MOL. Natural gas delivery, subway and helicopter renovation contracts, and the new Paks nuclear plant construction, however, were successful attempts. Russia wants to buy its way to any spot that could provide opportunities for controlling the market within the EU, says Tálas.

The experts further noted that there is another Russian influencing method –  supporting radical groups within the country. It has happened in Hungary that Russian agents kept regular contact with the organization called Hungarian National Frontline (Magyar Nemzeti Arcvonal). The neo-Nazi group’s leader allegedly shot dead a policeman last year. Péter Krekó added that these radical movements lose their value in the Russian government’s view if they manage to build a good relationship with a country’s government. This is what happened in the case of Hungary.

What can Hungary possibly want from Russia?

The conference participants could only speculate as to the Hungarian government’s intentions regarding Russia. It was stated that the government doesn’t communicate transparently about this question. For instance, after the meeting on Monday it wasn’t clear why Vladimir Putin visited the country other than for his love of judo. Nor was it clear what the Hungarian government wants from him and what kind of questions they were going to discuss.

The two countries have several common economical projects as mentioned above, but these don’t necessarily require a presidential meeting. But it is still in Vladimir Putin’s interest to show that, in spite of the Union’s sanctions towards his country, there is an EU member country that welcomes him. Several experts noted that while the Hungarian government might be critical internally when it comes to the sanctions against Russia, on international forums they vote against the suspension of the sanctions each and every time. According to Péter Tálas, a reason for this might be to avoid conflict with such nearby allies as Poland. For the latter country, the sanctions against Russia are a crucial point.

In the second part of the conference politicians participated as well. Political Capital invited a governing party MP, too, but the politician didn’t attend the event. The opposition politicians shared the opinion that this kind of behaviour contributes substantially to the non-transparency of the government’s intentions regarding Russian-Hungarian relations.

“Viktor Orbán deludes himself into thinking he’s an equal partner of Putin, but this is not true and it makes Hungary’s situation difficult,” said LMP (Politics Can Be Different) co-chair Bernadett Szél. She thinks that the country should stop the Paks investment and return to its own alliance system.

The Jobbik, LMP and Socialist politicians agreed that Hungary had deliberately chosen Western values and a Western allience system. According to Jobbik politician Márton Gyöngyösi, this choice had already been made in the time of the country’s first king, St. Stephen, while according to the Socialist Zsolt Molnár, the choice had come at the point of the EU and NATO membership referendums. However, Gyöngyösi further stressed that the hysteria about Russia should come to an end and the Hungarian-Russian relations should be handled much more pragmatically. Jobbik doesn’t oppose the Paks investment with Russian contribution, for instance.

In her reaction to this, Szél said it is naive to think that Putin’s methods would change over time. It is totally consistent with Putin’s politics to invade a neighbouring country, Szél argued. “A good Hungarian politician would part ways economically with Russia in such a case,” she said, and added that economic dependence will result in political dependence over time. “What is Viktor Orbán’s goal? Does he solely want money or does he want political dependence as well?” she asked.

The opposition politicians agreed on a few points. They all deemed the response by the Ministry of Foreign Affairs to the Dutch scandal exaggerated. Zsolt Molnár and Bernadett Szél further stressed the need to balance the governmental and the oppositional side in the National Assembly’s National Security Committee. In the current situation, when the governing party has one more MP in the Committee, the proposals to investigate Russian intelligence activity in Hungary are again and again outvoted.