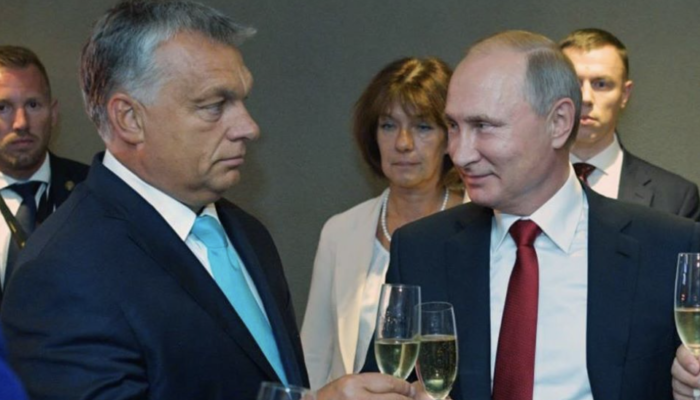 Putin arrived several hours late to the championships and missed the Opening Ceremony, taking his place in a private box of the Papp László Sportaréna only around 4 pm. He reportedly watched the afternoon judo matches alongside Orbán and later conferred with the prime minister in the sport arena.

Several opposition activists and politicians from Együtt, Momentum and Párbeszéd parties appeared at the sports arena in protest of the Russian president’s visit. Some held signs declaring “We won’t be a Russian colony!” while others wore T-shirts saying “Go freedom of speech! Go Hungarians!”, and the so-called “gay clown” masks that depict Putin wearing makeup and with vivid blond hair. The masks became a symbol of freedom of speech in Russia after they were officially banned.

The protesting activists were led out of the arena by security.

President Putin was quoted as saying, “I’m glad that I can discuss bilateral relations at the location of a sporting event. Despite some difficulties, the economic processes are developing nicely. Last year there was a minor 9 percent drop in commerce, but in the first half of this year we might have reached 27 percent growth.” Putin also reportedly expressed his satisfaction that Russian investments in Hungary had exceeded USD 1.5 billion.

In his discussions with Orbán, Putin reportedly assured the prime minister that Russian financing for the expansion of the Paks nuclear energy facility (a project known as Paks II) is guaranteed.

“We are working on the large project, in the energy sector as well. As that concerns the financing of the Paks investment, that is assured – 12 billion dollars. Works could begin on the site in the first half of next year,” Putin said, referring to a USD 12 billion loan for the Paks II project being furnished by a Russian state-owned bank.

Putin’s suggestion that the long-awaited project could move forward at the beginning of next year was supported by Hungary’s Minister of Foreign Affairs and Trade Péter Szijjártó, who told journalists in Budapest Monday that “construction will begin in Paks at the beginning of next year, in January. Nothing can stop the construction of the Paks II nuclear power plant now.”

Szijjártó also confirmed Monday that of the USD 12 billion in investments for Paks II, 40 percent will be undertaken by Hungarian companies. This leaves Russian firms with the remaining 60 percent of the work on Paks, which just complies with EU rules regulating large investments by non-Union states.

Szijjártó added that while the two leaders had not made any new agreements during the visit, “common decisions made earlier are starting to bear fruit.” The minister said that positive results of increased economic cooperation were beginning to appear after years of difficulties posed by sanctions against Russia by the European Union. This year commercial traffic between Hungary and Russia had increased 34 percent by the end of May, including a 30 percent increase in Hungarian exports to Russia. Among those exports are pharmaceuticals, exports of which rose 44 percent on the year, and grain, which climbed 89 percent in the first five months of 2017. According to Szijjártó, the next step in increasing economic cooperation is the implementation of investments in the Hungarian water industry.

A possible natural gas pipeline was also reportedly discussed by Orbán and Putin. The Russian government is reportedly working together with the governments of Turkey, Bulgaria, Serbia and Hungary to ensure that Russian natural gas has a route by which to reach Western European markets. Szijjártó emphasized that this pipeline be created “by the end of 2019,” though it would not be a new line but a modernization of the Bulgarian, Serbian and Hungarian lines with new construction in a limited number of sites. This means, he said, that natural gas infrastructure capable of handling 10 billion cubic meters of gas should be constructed on Hungary’s southern border by the end of 2019.