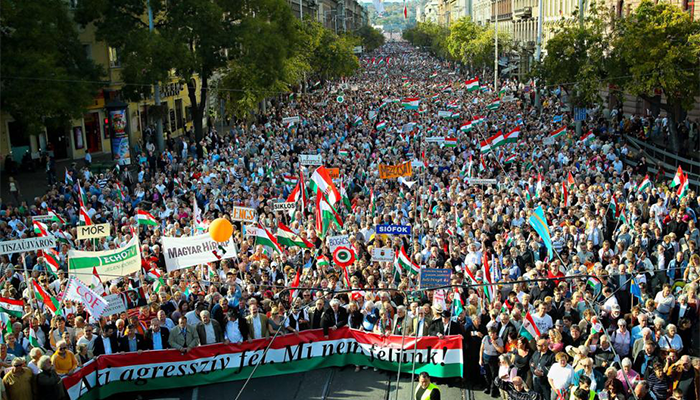 Fidesz helped OCF transport pro-government demonstrators to Budapest to participate in Saturday’s “peace march”.  The banner says “He who is aggressive is afraid.  We are not afraid!”.  Fidesz oligarch Gabor Szeles can be seen in front gripping the banner just above the “ss” in “agressziv”.

The article appeared three days before the election rally held by Fidesz in Budapest’s Heroes’ Square on 29 March.

The rally was attended by hundreds of thousands of people participating in the so-called “peace march” supposedly organized by Civil Unity Forum (Civil Osszefogas Forum, COF).  COF has campaigned extensively for Fidesz over the past several months and was behind the massive “clown” billboard smear campaign that featured leading opposition candidates in a police line-up with a clown’s arm draped over the shoulders of DK chairman Ferenc Gyurcsany.  The billboards appeared in virtually every city, town, and village several weeks before the official start of the campaign season.  The same “civil organization” reportedly hired some four hundred buses to transport people from the countryside to Budapest to take part in the “peace march” along the length of Andrassy boulevard, conveniently placing hundreds of thousands of people at Heroes’ Square just in time to hear Fidesz chairman Prime Minister Viktor Orban’s election speech.

New campaign laws impose strict campaign spending limits on political parties which the ruling party has circumvented with the help of an NGO functioning as a kind of super-PAC, and, of course, the government itself (which recently ran ads on TV2 featuring the same “Hungary is doing better” slogan as the one used by Fidesz).  This is but one of many ways the governing Fidesz-KDNP has changed the rules of the game so as to virtually ensure its victory on Sunday.

Fidesz has yet to deny the authenticity of the recordings. If authentic, they would lend further credence to the analysis of campaign finance made by Transparency International, K-Monitor and Atlatszo.hu.

According to Kepmutatas.hu Fidesz has already spent over HUF 2.1 billion (USD 9.3 million) on its 2014 election campaign–more than twice the legal limit of HUF 1 billion–either directly or through proxies, including COF and the Hungarian government itself.  Of this, COF alone supplied some HUF 592 million (USD 2.63 million).

Because COF is not a political party but a NGO, it is not required to publicly disclose the source of its funding, which is rumored to have come from prominent Fidesz oligarchs of the likes of Gabor Szeles, Lajos Simicska, and Zsolt Nyerges.

The following recordings purport to show how Fidesz actively collaborated with COF to transport civilians from around the country for the peace march and Fidesz election rally held on 29 March.

Caller: Hello, good afternoon. My name is Mrs…. and I’d like to know if you could help me make it to the peace march on March 29.

Fidesz party representative: Of course, there will be a bus leaving from Szombathely.

Fidesz party representative: It’ll be leaving from Szombathely on Saturday, so all you need to do is sign up with your name and phone number and that’s it…. and signups are still going on, so there’s still plenty of room for more people.

Caller: There’s a group of us who would go, so we can sign up at your office?

Fidesz party representative: Yes. Do we know each, or?

Caller: No, I don’t think so, we’d be coming to Szombathely from the countryside because we can get a ride until there, but we don’t have a way to go any further.

Fidesz party representative: Of course. We’ll be leaving most likely from Szombathely, but we don’t know the exact location of where we’ll be meeting. My colleague is organizing that. I’ll forward your information to my colleague and they’ll call you and let you know when we’ll be leaving, okay?

Caller: So you don’t know when we’d be leaving or coming back? I don’t know how much this will cost, can you tell me?

Caller: Free, oh, how splendid, thank you. So then you don’t know when we’d be coming home, or leaving to the event?

Fidesz party representative: My colleague will be able to tell that, okay?

Caller: Okay, then I’ll talk to…

Fidesz party representative: So will you be going alone or with a group?

Caller: Okay, then I’ll talk to …. about how many of us will go and then if I call tomorrow, or can I call back later today?

Fidesz party representative: Well, I think you should call back today…

Caller: Hi, is this Fidesz office? Good day to you!

Caller: I’m not sure whether you’re the person I spoke to when I called earlier, or perhaps you’re that person’s colleague.

Fidesz party representative: It’s me, you called about the peace march?

Caller: Yes, about the bus ride on March 29th. I’d like to know if were able to talk to your colleague, because truth is it would be very important for us to know when the bus is leaving because we’re from the countryside and…

Fidesz party representative: Half past 8am.

Caller: And when would we get returning?

Fidesz party representative: The election rally starts at 3pm, so I definitely think you won’t be returning before 10pm.

Caller: And where’s the bus leaving from? Can you tell me that?

Fidesz party representative: Hang on one moment. I’ll call you back, okay? I’ll ask my colleague for precise details and I will call you back so that you don’t have to call us again….

Transparency International: This may be a free election, but it’s definitely not fair, BudapestBeacon.com; 18 March 2014.