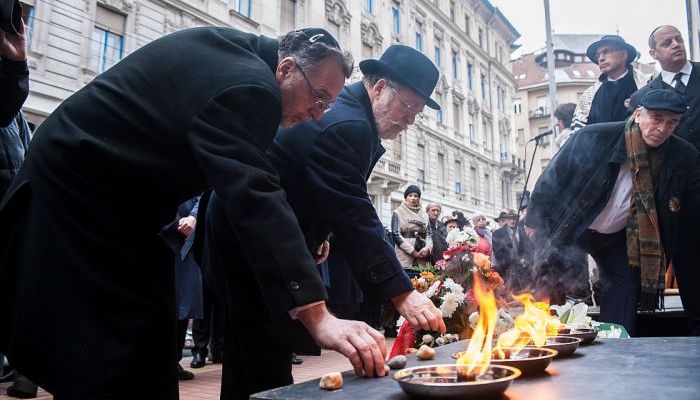 Russian-Jewish singer and Putin-loyalist Joseph Kobzon as well as the Alexandrov Choir of the Russian Army (colloquially known as the Red Army Choir) performed on Sunday at the commemoration of the seventieth anniversary of the liberation of the Pest ghetto by the Soviet Army.  Speakers included Vladimir Sergeev, ambassador of the Russian Federation to Hungary, András Heisler, president of the Hungarian Federation of Jewish Communities (Mazsihisz), Róbert Frölich, chief rabbi of the Dohány Street synagogue, and rabbi Tamás Verő.

The event was followed by a concert of the Red Army Choir inside the temple. Jewish weekly Szombat reminded its readers that Kobzon’s right to enter the US has recently been revoked under Presidential Decree No. 7750, for allegedly participating or benefiting from corruption.

In response to criticism for its choice of music, Mazsihisz said the responsibility of organizing the event lies entirely with Dávid Schwezoff who was recently recalled as the head of Budapest’s Jewish Community (BZSH).

Ambassador Sergeev emphasized in his speech that Russia is proud of the Soviet soldiers who have “taken thousands of innocent victims out of the Nazis’ claws” as well as liberating Auschwitz-Birkenau, Nazi Germany’s largest death camp, “especially because they paid a high price for it.” He said it was important to remember the events, especially because, according to Sergeev, “a number of people nowadays will try to distort the facts” of the mass-murder. Heisler emphasized the mixed feelings of “grieving for the dead, as well as the the joy of being liberated. Even the devils from Hell were not capable of destroying the Jews.” Heisler concluded his commemorative speech by expressing his hope that the younger generation will leave with “new questions, eager to seek answers.”

Budapest head rabbi Róbert Frölich also emphasized the importance of remembrance and the role the Soviets played in it. Speeches were followed by honoring surviving two Soviet veterans who participated in the siege of Budapest in 1945. As one of the commemorators told ATV, “We should remember who erected the ghetto walls, who tore it down, as well as who would willingly rebuild it.”

The commemoration was funded in part by Russian state atomic energy company Rosatom and Mazsök, a Jewish cultural center receiving government subsidies.  Hungarian press reported that Kobzon, who used to be Soviet premier Leonid Brezhnev’s favorite singer and is now a Putinist member of the Russian Duma, as well as a firm defender of the Russian invasion of his native Eastern Ukraine, was invited to Budapest despite Putin not being welcome at the official Auschwitz commemoration.

Mazsihisz press office told the Beacon on Monday that the event was entirely organized by recently dismissed Budapest Jewish Community CEO Dávid Schwezoff. According to press officer Ákos Nagy, Mazsihisz had no prior knowledge of the invited performers’ identities, as Schwezoff preferred to keep organizational matters in his own “smaller circle” within BZSH.  After his dismissal, Mazsihisz leadership “had been presented with already established facts” that Kobzon and the Red Army Choir would perform, and that Ambassador Sergeev was scheduled to address the audience, therefore they had “no choice but to go forward with the plan.” Nagy also told that they had no prior knowledge of Kobzon’s political activities, and after learning of them, they “regret the event will be interpreted in such a politicized context.”

According to Mazsihisz, president Heisler was nevertheless content with the organization of the event.

Only a week before the liberation of Auschwitz, the Soviet army reached the walls of the Pest ghetto, which had been established by Nazis and Hungarian loyalist Arrow Cross authorities in November 1944, and liberated its surviving Jewish inmates. At the peak of the terror, more than 70 thousand persecuted Hungarian Jews were living inside the walls of the ghetto. Just days before the liberation, Soviet troops kidnapped Raoul Wallenberg, a Swedish diplomat who saved and sheltered tens of thousands of Jews on an international mission. In recent years it has been revealed that after his disappearance, Wallenberg ended up in a KGB special prison, where he eventually died.