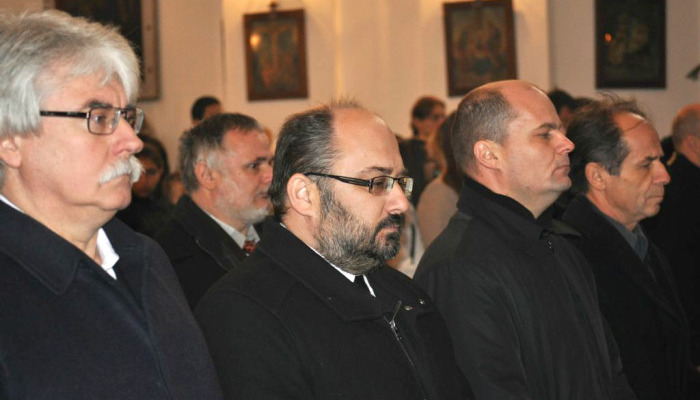 The Veritas Institute for Historical Research, a new government-funded historical research institute led by military historian Sándor Szakály (left), held a conference at the Budapest Military History Museum and Research Institute on Friday.  Attending Veritas’ third conference in under a year were mostly elderly academics and some political figures.

An audio recording of the lectures can be downloaded here and here.

Rather than present new findings, most of the speakers offered apologetic interpretations of the era associated with Hungary’s interwar governor, admiral Miklós Horthy.  Veritas board president, former prime minister Péter Boross and Veritas director Sándor Szakály were careful to avoid any detailed discussion of the Hungarian Holocaust, emphasizing instead Horthy’s anti-Nazi aversions and the “helplessness” of his situation.

In his opening remarks, Boross claimed that the expression “anti-Semitism” was simply unknown in the Hungarian countryside of the 1940s, arguing that claims to the contrary are merely products of “Marxist historiography.”

“For decades, the Horthy-era, with its difficult choices, and pre-determined political way, was considered to be the era of traitors and the destruction of the nation. Our historical consciousness that is part of our wider national consciousness, however, inevitably raises the question whether this is the truth, and whether this is how it had really happened. […] I have to say, that it was completely not like what have been taught in schools after 1945.”

Boross then went on the describe the circumstances of his childhood. Born in 1929 as the son of a forester on a large estate near Kaposvár, he claimed that between 1938 and March 1944, anti-Jewish legislation introduced by Pál Teleki’s and László Bárdossy’s subsequent governments had no effect whatsoever on the attitude of the gentry living in the countryside towards Jewish Hungarians. Boross illustrated this story with an account of how his father and other royal army officers who were members of the Kaposvár Gentlemen’s Club literally “dragged Jewish members to the table from their homes” after they were afraid to turn up following the restrictions on Jews’ membership in such social institutions. Boross generalized this childhood story as the overall attitude of Hungarians towards those persecuted under racial laws. According to him, trouble only started with the German occupation of Hungary on 19 March 1944.

Boross dismissed claims that Hungarian troops invading the Soviet Union in 1941 as part of Barbarossa committed cruelties against Soviet civilians.

“We (Hungarians) are living under the pressure of great powers for a continuous five centuries. Sometimes it seems like to me, that we have not learned at all from this experience. […] Now constant media information flow pushes into people’s minds the entire opposite of István Széchenyi’s thought about ‘We are inferior to no other nation,’ saying somehow that we are worse than all other nations. […] In this environment, it could be done, that such a book is published in Hungary, with the support of university professors, according to which the Hungarian army was waging a genocide in the Russian villages and killed everybody they came across. For this a whole generation who took part in the Soviet invasion needed to die out. I would request all of you ladies and gentlemen to counter my words with examples. Many crimes have been committed in the era that are unworthy of the tolerant past of our Hungarian nation, and I am sure that these wounds are true wounds. But judging a whole era, we would need some objectivity. We would even debate these questions if anybody would be willing to debate with us!”

Boross’ last comment was in reference to a recent collection of studies edited by Tamás Krausz, professor or Russian studies at ELTE University, and Éva Mária Varga, detailing Russian archival sources about the mass killings of Soviet citizens at the hands of Hungarian troops between 1941 and 1944.

Boross’ opening speech set the tone for the entire discussion. Following him, Sándor Szakály, military historian and the director of Veritas Institute, repeated Boross’ claims that most of the cruelty and inhumanity against Hungarian Jews and Roma happened after the German invasion of March 19, 1944, and that Horthy attempted to counter such tendencies. He added, however, that failing to do so has denied Horthy a place among Hungary’s greatest statesmen, making him only a leader.

“In 1938-41 regaining some of the Hungarian territories lost after the 1920 Treaty of Trianon took effect was undoubtedly an era of joyful celebration in the country.  As the country feels that territorial revisions meant that Horthy’s politics for twenty years were successful, they also meant a direct dedication to Nazi Germany and Fascist Italy.  Responsibility for what happened then is entirely Horthy’s as he was the governor of Hungary and the sovereign leader of the army,” Szakály told the audience.  In spite of these comments, Szakály stated that, in his professional opinion, Horthy did not know about the deportation of Hungarian Jews to Auschwitz and about the mass extermination happening there up until the summer of 1944.

Most experts writing on the Hungarian Holocaust disagree, arguing that it should have been clear from his regular meetings with Hitler and Ribbentrop during 1942 and 43 that a mass extermination of Jews was happening in Nazi-occupied Europe.

Other presenters were even less critical of Admiral Horthy. Béla Kádár, senior economic historian and part of Veritas Institute’s board, summarized the economic achievements of the era as finding a successful way out of subsequent regional crises after 1919 and also after 1929. Kádár told the audience that while István Bethlen, Horthy’s prime minister between 1922 and 1931, applied “orthodox liberal” economic policies, like multi-level taxation and loans taken out from the League of Nations, that helped him rebuild Hungary after a devastating war. According to Kádár, Gyula Gömbös and his “National Workplan” introduced in 1933 was equally successful in bringing Hungary out of the long-term consequences of the Great Depression.

Gömbös was the first Fascist prime minister of Hungary, who copied many of the economic tools and measures of Italy’s Benito Mussolini.

Veritas Institute Gábor Ujváry held a presentation about the cultural policy of the Horthy regime and two of its foundational figures, Kuno Klebelsberg and Bálint Hóman, both ministers of culture. Ujváry offered a positive evaluation of their activities citing the establishment of thousands of elementary schools for impoverished children, the substantial reduction of illiteracy in Hungary, as well as the restructuring of higher education.  On the subject of numerus clauses, Ujváry said its primary purpose was to “reduce the overproduction of intellectuals in a difficult economic situation.” Ujváry neglected to mention that Klebelsberg opposed the 1927 retraction of the 1920 numerus clausus placing limits on the number of Jews that could attend university. Nor did he mention restrictions placed on the number of Jewish Hungarians working in the fields of media, theatre production, literature and higher education between 1938 and 1942 under then-minister for culture Bálint Hóman.

At the very end of the conference, Róbert Kerepeszki of the University of Debrecen presented the findings of his own research, offering a comprehensive critical assessment of Horthy’s elite loyalist corps, the Vitézi Rend (Order of Gallants). Addressing a crowd featuring a number of individuals sporting various medals and badges signifying the various hereditary titles of that order, Kerepeszki held a balanced lecture, presenting little-known facts about Admiral Horthy’s “private nobility”.

Kerepeszki said that while true the Vitézi Rend was in an open confrontation with the Arrow Cross Party and many other pro-Nazi paramilitary organizations in Hungary, it itself was still “radically rightist, ultra-Nationalist as well as anti-Semitic, never admitting Jews to their ranks.” The historian added that this was completely in line with Horthy’s requirements, and reminded the audience that Horthy himself admitted to being an anti-Semite in a letter addressed to prime minister Teleki. The Debrecen professor then presented his findings, according to which, in addition to being a new privileged class accorded preferential access to state employment and contracts by 1930s legislation providing for their positive discrimination, they also operated an unofficial secret service, informing their headquarters (and Horthy) about any dissent present in the country.

Kerepeszki’s lecture received restrained applause from the audience, some of whose members were visibly annoyed by its tone.

While clearly charged with the task of reassessing the history of this dark chapter in Hungary’s history, at least Professor Szakály is living up to his promise “not to deny anyone the opportunity to seek the truth”.