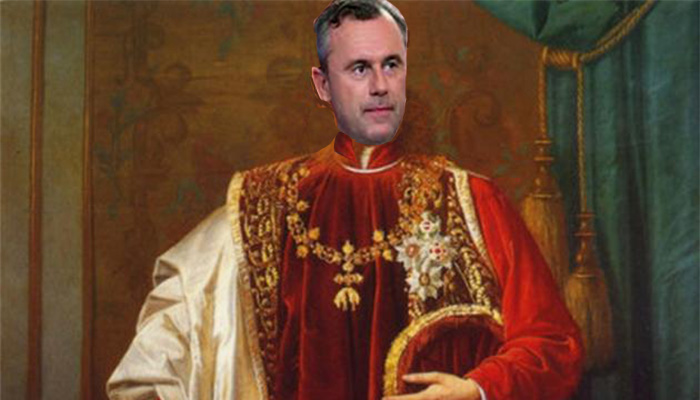 Norbert Hofer, the candidate of the far-right Freedom Party of Austria (FPÖ) in next month’s re-run presidential elections, wants Hungary to join a new alliance consisting of former members of the Austro-Hungarian empire.

The far-right politician believes Central European countries with similar cultures, including Austria, Hungary, Romania, Slovenia, Serbia, Croatia, and the Czech Republic, should form a new bloc within the European Union.

(Apart from the Romanian region of Transylvania, the Serbian region of Voivodina, and the Banat of Temes, which was divided between Serbia and Romania after the First World War, neither Serbia nor Romania ever belonged to the Habsburg empire.  Nor is it clear what parts of modern-day Poland, Ukraine, or Bosnia Hofer has in mind for his Anschluss. –ed.)

“Austria was in an alliance with these countries during the time of the Monarchy, and I hope that we will easily agree on a platform, that way we will have greater weight in the European Council,” said Hofer in an interview with Swedish paper Dagens Nyheter.

(In point of historical fact, the House of Habsburg ruled over the constituent lands of the Austrian and later Austro-Hungrian empire until the end of the First World War.  Any “alliance” was either dynastic in nature or involved military occupation.-ed.)

The renewed focus on the Austrian far-right’s proposal came just as the Hungarian government was in Serbia for a two-day joint session with its Serbian counterparts.

The FPÖ has already attempted to convince the country’s legislature that the country should join the Visegrad alliance of Hungary, Slovakia, the Czech Republic, and Poland, but the proposal was rejected in October.

Apparently, the party has raised its sights from the Visegrad countries of Hungary, Slovakia, and the Czech Republic to all of Vienna’s former imperial subjects.

Hofer raised the idea of an alliance in the past, but over the past few months he has begun actively trying to turn his vision into reality.

In early November, Hofer travelled to Belgrade to meet with Serbia’s leaders, and in September he visited Prague, where he met with the country’s president, Milos Zeman.

What Hofer has in common with some of the leaders he is courting for his new alliance is his strong pro-Russian stance, euroskepticism, and anti-refugee rhetoric. In fact, Hofer has publicly advocated for a referendum on Austria’s EU membership if the bloc does not change course.

Reacting to Russia’s 2014 invasion and annexation of Crimea in violation of the Budapest agreement, Hofar said Crimea always belonged to Russia.

In Hungary, Hofer’s most enthusiastic supporter is the Jobbik party, which publicly endorsed his candidacy. Nevertheless, the FPÖ has been highly supportive of Prime Minister Viktor Orbán.

“In my opinion, the Hungarian government has proven that it is able to act soberly, taking into account the interest of the people and with reason,” FPÖ General Secretary Harald Vilimsky said when discussing the Fidesz government’s migration policies.

So far Orbán has been careful to avoid publicly endorsing the FPÖ. In September 2015, a scheduled meeting between the Hungarian prime minister and FPÖ party leader Heinz-Christian Strache was cancelled. At the time, Orbán said both that he had reservations about the party, and that Austria’s leaders had requested he cancel the planned meeting.

But the fact that the two politicians were scheduled to meet at the height of the migration crisis indicates that the Fidesz government is considering building a relationship with Austria’s far-right.

Hungarian pro-government media’s preoccupation with the FPÖ’s proposal for a new bloc may signal that the Fidesz government is interested in the plan.  Conservative print daily Magyar Nemzet has already speculated that the proposal could fit Orbán’s own vision for the region.

Orbán’s attitude towards FPÖ and a new regional alliance are likely to become clearer after the re-run of Austria’s presidential election on December 4.