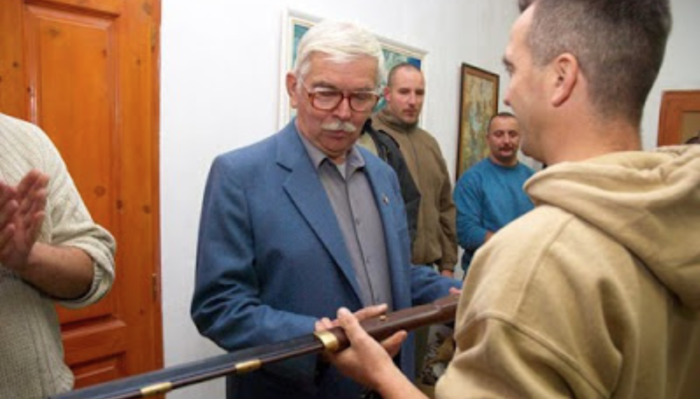 An indictment against the radical right-wing paramilitary leader István Győrkös Sr. (pictured), who allegedly shot dead a National Bureau of Investigation detective in October 2016, might be ready as early as September, reports pro-government daily Magyar Idők. Győrkös could receive a sentence of life imprisonment.

Deputy spokesperson for the Central Detective Chief Richárd Simon told Magyar Idők that there is a 30-day deadline for preparing the indictment once the investigative material has been presented. This can only be extended by another 30 days twice.

The Győr Regional Court could discuss the case, given a priority designation, as early as September. Meanwhile, the investigative judge of the Győr District Court prolonged Győrkös’s pre-trial custody until October 27.

Prosecutors will likely accuse Győrkös of murder of an official person while endangering others, and misuse of an illegally held firearm.

On October 26, 2016 two detectives of the National Bureau of Investigation (NNI) approached Győrkös’s residence to search for illegal weapons. The 76-year-old leader of the radical right paramilitary group Hungarian National Front (MNA) was said to be cooperative at first but at one point allegedly got into an argument with the detectives, walked back into his house and loaded his illegally held AMD assault rifle. The detectives meanwhile called for backup and followed Győrkös into the house.

Győrkös reportedly opened fire the moment chief detective Major Péter Pálvölgyi entered the door. One bullet from the 4-5 round burst hit Pálvölgyi in the forehead, killing him instantly. Officers following Pálvölgyi into the house returned fire with small arms and injured Győrkös.

Authorities made numerous mistakes before and during the incident. Although Győrkös had long been known to intelligence agencies and was considered to be armed and dangerous, the NNI did not ask for the Counter Terrorism Centre’s (TEK) help. Special units of TEK only arrived after the deadly shot had been fired.

Fleeing officers left Pálvölgyi in the house without checking his status for 30 minutes before the arrival of the TEK units. It was also alleged for a while that friendly-fire killed Pálvölgyi, but reports from the forensic medical practitioner and the forensic weapons expert determined without any doubt that the deadly shot came from Győrkös’s assault rifle.

Several unconnected state security sources later confirmed that the militant organization run by Győrkös was connected to the GRU, the Russian military intelligence service. Furthermore, Russian diplomats are known to have taken part in airsoft (military games where plastic pellets are used as ammunition) training with the Hungarian paramilitary organization.

The Hungarian National Front has been virtually eradicated since then. Over the course of multiple raids by TEK and the police, authorities seized illegal weapons caches of the militant organization and arrested 12 alleged members of the group.