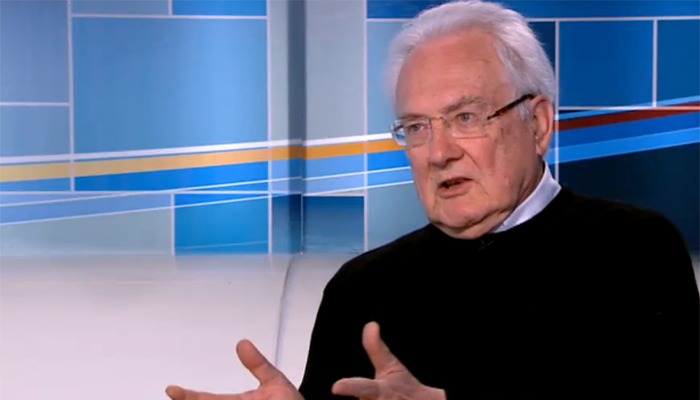 Péter Rona recently told ATV’s Egon Ronai that 2015 will be a more difficult year for Hungarians as a whole than 2014.

Among the developed countries of the world, Hungary has been left on its own.  Rule of law no longer exists.  The democratic institutional system necessary for capitalism has collapsed.   Furthermore, it turns out the system is fundamentally corrupt from the top down.

Reflecting on Fidesz landslide victories in national, European Parliament and local elections this year, Rona said it appears Hungarian society requires neither democracy nor transparency or reliability in public life.

From a Western point of view Hungary got the opportunity in 1989 to create a sensible, rational, reliable, democratic system. By contrast, it has chosen not to avail itself of this opportunity.

On the subject of the much-awaited 2015 budget, Rona said preparing a budget requires assumptions be made about how the rest of the world judges Hungary, pointing out that the Hungarian economy is “very sensitive” to what is happening in terms of foreign trade and investment.

How much will state debt cost? What investment activity will take place?  Will they bring capital or take it away?  The world has drawn its conclusions.  The (US travel ban) scandal is a concrete manifestation of this.

Rona said endemic corruption was a major reason why the Hungarian economy at large was incapable of performing.

Corruption isn’t only about how much money is diverted from the state. The most important consequence of corruption is its impact on competition. The tax cheats employ unethical means to gain economic advantage, which, in turn, kills their competitors.

He said the distribution of EU money creates a greater competitive disadvantage for those parties that don’t win, pointing out that “politics strongly influences the tenders and the winners”.  Corruption prevented a competitive economy from forming in Hungary, which, in his estimation, explains why “capital won’t come here”.

Rona does not believe the Hungarian economy will grow 2.5% in 2015 as projected by National Economy Minister Mihály Varga, and points out that Hungary is one of very few countries in the world whose economy has not returned to 2007 levels.

He called “unintelligible” Fidesz caucus leader Antál Rogan’s claim that “the 2015 budget will be the budget of a reckoning with the banks”.

We knew six years ago that there were problems with FX loans.  None of the governments did anything about it. It has become a serious problem, one that is very difficult to overcome.  Is there a single FX debtor who knows how much money he is going to receive and when?  What kind of reckoning are we talking about?