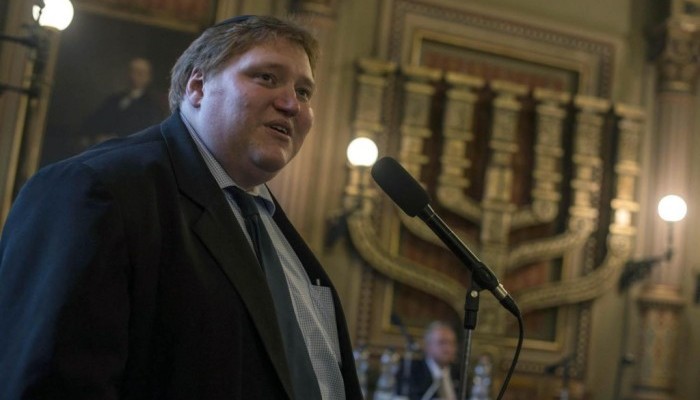 Recently elected CEO of Budapest Jewish Community (BZSH) David Schwezoff was fired at an extraordinary community assembly session on Thursday, with 38 out of 57 members voting to recall him. The reason given was that Schwezoff was abusing his democratic powers within a community civil organization. The assembly also installed BZSH president Péter Kunos as his temporary successor.

The young leader was elected to effectively head BZSH in July 2014. Immediately after his election, Schwezoff became the subject of a scandal after photographs of him as a burlesque performer surfaced on the internet.  Later he accused long-standing members of the Jewish Federation (Mazsihisz) and Budapest Community leadership of corruption, resulting in the dismissal of Péter Tordai from the BZSH presidency. His recent attempt to do the same with Dohány street chief rabbi Róbert Frölich, however, cost him the trust of the Jewish community assembly.

The dismissal happened after a series of letters asking for Schwezoff’s removal written by respected elderly rabbis, such as József Schweitzer and Alfréd Schőner, rector of the Budapest Rabbinical Seminary. Schweitzer wrote that “it would be most important to put an end to the havoc caused by Schwezoff.”

In his defence, Schwezoff told the assembly before the vote that his activity was to enhance the operation of the Jewish community as well as to increase revenues from tourism. He also proposed to retract his attempts to remove Frölich.

Previously Schwezoff claimed in multiple email messages to the assembly that Frölich and his wife were engaged in corruption during the acquisition of access systems for the Great Synagogue in Dohány Street, Budapest. In connection with state funding offered to renovate Budapest’s Rumbach Street Synagogue, he also accused Hungarian Jewish Federation (Mazsihisz) leader András Heisler of being “unfit for his role.”

Kunos, a former businessman, will now hold the positions of president and CEO within Budapest Jewish Community simultaneously until the assembly elects another CEO.