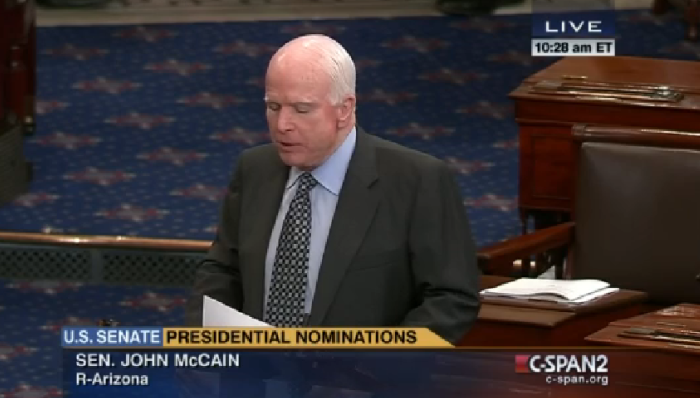 In a speech delivered to the United States Senate opposing the appointment of Colleen Bradley Bell as ambassador to Hungary, Republican Senator John McCain referred to Prime Minister Viktor Orbán as a “neo-Fascist dictator”.  When asked by 444.hu to verify that McCain was referring to Orbán and not to Russian Federation President Vladimir Putin, the Senator’s office confirmed that the criticism was directed at Orbán.

Hungary’s Foreign Ministry responded by summoning M. André Goodfriend, the US Chargé d’Affaires, to offer an explanation for McCain’s comments.

McCain condemned the appointment of Bell as ambassador in his Senate floor response on Tuesday.  Among other things, the veteran Arizona GOP Senator said that:

“I am not against political appointees. I understand how the game is played.  But here we are, a nation that’s on the verge of ceding its sovereignty to a neo-Fascist dictator, and we’re going to send the producer of “The Bold and Beautiful”.  I urge my colleagues to stop this foolishness. I urge a no vote.”

Criticism from the senior GOP Senate member hit a sensitive spot within Fidesz circles. Before coming to power in 2010, Fidesz and its leader Viktor Orbán clearly endorsed McCain’s 2008 presidential campaign. At that time, Orbán even went so far as to declare McCain a “national hero in the most original sense of this expression.”

Minister of Foreign Affairs and Trade Péter Szijjártó reacted to the statement from Brussels, saying that “Hungarian citizens, who have voted for Fidesz three times in a row this year with an overwhelming majority, would deserve more respect. […] Senator McCain should pay less attention to misinformation coming from the press, unless he is risking making uninformed statements like this.”

Szijjártó added that the Hungarian Embassy in Washington DC. is in contact with Senator McCain and will consult him about the background of his comment.

Liberal 444.hu later reported that the US Chargé d’Affaires, M. André Goodfriend, had been summoned to the Ministry of Foreign Affairs and Trade where he would meet with state secretary Levente Magyar this afternoon to account for McCain’s remarks. Goodfriend has already distanced himself from the remarks, issuing the following comment via Twitter:

@leho1995 And it’s important to try to listen to opinions with respect, but one doesn’t always have to agree.

Unaware of this development, Hungarian government spokesperson Zoltán Kovács reacted on Wednesday morning with an assumption that the Hungarian press “misinterpreted” the target of McCain’s attack, and claimed that the reference was aimed at Putin, claiming this is “clear from the context.”

A bi-partisan congressional delegation led by McCain met Orbán in January 2014 to express concerns on a range of matters.  After the meeting, McCain made the following statement:

We have had the opportunity to meet today with Prime Minister Orban, with opposition political leaders, and we just toured Hungary’s parliament building, which is one of the most beautiful monuments to freedom and democracy anywhere in the world.

We have assured both the Prime Minister and the opposition that the United States remains Hungary’s committed ally and friend. America is proud to have supported Hungary every step of the way on its democratic journey – from the heady days of 1989, through its accession to NATO and the EU, to the challenges of the present.

We understand the concerns about the state of democracy in Hungary that have been raised by people both inside and outside of this country. Some of these concerns are very serious. They need to be resolved democratically, by Hungarians, and this country’s democratic institutions, its checks and balances and rule of law, need to be strong enough to support that process.

The United States and the rest of the free world have an abiding interest in Hungary’s continued development as a strong, inclusive, and tolerant democracy, with a free market economy, an independent judiciary, and a free media. It is our hope that Hungary’s upcoming election will demonstrate the vibrancy, competitiveness, and fairness of Hungarian democracy. And there is no better way for the world to witness and affirm that expression of democracy than by having respected, objective international groups present to observe the vote.

We also discussed with both the Prime Minister and the opposition our many common foreign policy interests. We share a commitment to consolidating democracy in the Balkans, integrating Ukraine into Europe, fostering a free and peaceful Afghanistan, and deepening security cooperation in NATO, especially on counterterrorism. We also expressed our hope that Hungary will address its energy security needs in ways that further diversify Europe’s supply of energy. The United States is grateful for the strong international cooperation that we enjoy with Hungary, and its willingness to play a leadership role on behalf of international peace and security. We believe that the success of our alliance is measured, in large part, by what we do together to support a more democratic, secure, and prosperous future – not just in Europe but also beyond Europe.

In all of these shared challenges, we realize that a strong democratic Hungary is the best, most effective partner for the United States and our NATO allies. Now more than ever, at this time of great upheaval, and amid a growing global outcry for democratic values, the world needs Hungary’s leadership and its good example.