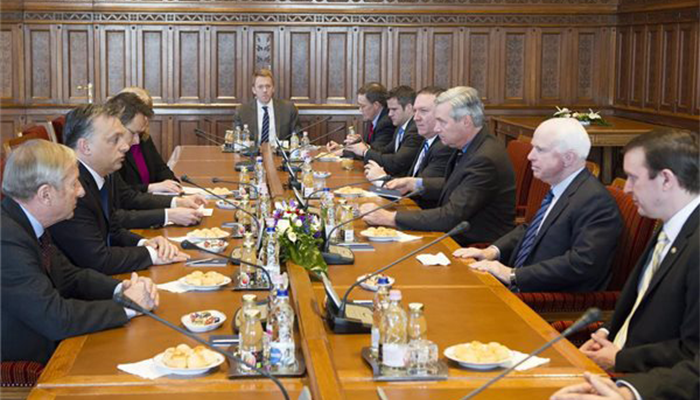 At Senate confirmation hearings held on January 17 of this year, Bell delivered a prepared statement that included a concise and measured summary of US concerns over Hungary.  The same concerns were addressed by a range of experts in oral and written testimony delivered in 2012 to the Senate Helsinki committee chaired by Senator Ben Cardin.

In an open letter addressed to Ambassador-Designate Bell, Fidesz MP Gergely Gulyas (who attended the Helsinki committee proceedings along with MEP Jozsef Sajer) accused Bell of being “uninformed” and part of a “politically partisan” attack on Hungary.

Gulyas’ letter received extensive coverage in the Hungarian press. Tellingly, no Hungarian language media outlet published a full translation of Bell’s statement, relying instead on a somewhat misleading summary of her statement as reported by the Hungarian state media service (MTI).

After meeting with Prime Minister Viktor Orban, McCain made the following statement in which he called for international monitors to observe parliamentary elections scheduled for April 6:

I am Senator John McCain of Arizona. And I am pleased to be here today with a bipartisan group of members from both houses of the U.S. Congress:

We have had the opportunity to meet today with Prime Minister Orban, with opposition political leaders, and we just toured Hungary’s parliament building, which is one of the most beautiful monuments to freedom and democracy anywhere in the world.

We have assured both the Prime Minister and the opposition that the United States remains Hungary’s committed ally and friend. America is proud to have supported Hungary every step of the way on its democratic journey – from the heady days of 1989, through its accession to NATO and the EU, to the challenges of the present.

We understand the concerns about the state of democracy in Hungary that have been raised by people both inside and outside of this country. Some of these concerns are very serious. They need to be resolved democratically, by Hungarians, and this country’s democratic institutions, its checks and balances and rule of law, need to be strong enough to support that process.

The United States and the rest of the free world have an abiding interest in Hungary’s continued development as a strong, inclusive, and tolerant democracy, with a free market economy, an independent judiciary, and a free media. It is our hope that Hungary’s upcoming election will demonstrate the vibrancy, competitiveness, and fairness of Hungarian democracy. And there is no better way for the world to witness and affirm that expression of democracy than by having respected, objective international groups present to observe the vote.

We also discussed with both the Prime Minister and the opposition our many common foreign policy interests. We share a commitment to consolidating democracy in the Balkans, integrating Ukraine into Europe, fostering a free and peaceful Afghanistan, and deepening security cooperation in NATO, especially on counterterrorism. We also expressed our hope that Hungary will address its energy security needs in ways that further diversify Europe’s supply of energy. The United States is grateful for the strong international cooperation that we enjoy with Hungary, and its willingness to play a leadership role on behalf of international peace and security. We believe that the success of our alliance is measured, in large part, by what we do together to support a more democratic, secure, and prosperous future – not just in Europe but also beyond Europe.

In all of these shared challenges, we realize that a strong democratic Hungary is the best, most effective partner for the United States and our NATO allies. Now more than ever, at this time of great upheaval, and amid a growing global outcry for democratic values, the world needs Hungary’s leadership and its good example.

During his meeting with Prime Minister Viktor Orban McCain reportedly also expressed concern over controversial plans to erect a memorial to the Hungarian “victims” of the German “invasion” of March 19, 1944.

In stark contrast to the previous week’s media feeding frenzy over Bell’s comments, the Hungarian press exhibited remarkable restraint in its coverage of McCain’s visit, although that has not prevented a variety of pro-government and pro-Fidesz bloggers from strongly criticizing him.

In a February 3 piece entitled Senator John McCain came, He Saw, and He Talked Nonsense, political commentator Tamas Fricz wrote Hungary would forget McCain’s lightning fast visit just as quickly as he made it.

McCain’s comments ignored the fact that the European Parliament had cancelled the monitoring procedure against Hungary, that the European Commission had acknowledged steps on the part of the Hungarian government to correct democratic institutions, and that the Venice Commission and the European Council had not raised objections to Hungary’s law on elections. Is he aware that when he says such things he is exclusively excreting the opinion the domestic and international left and left-liberal media. Is the former candidate for president aware that it is not worthy of a US senator to repeat so one-sidedly the political theories and accusations in the time of elections?”.

Fricz strongly objected to McCain for implying that Hungary was some kind of third world political dictatorship in his extraordinary call for international election monitors.

On the subject of the planned monument, Fricz writes

If it seems that the monument somehow approves German behavior in this country and the behavior of those who cooperated with Germany, then this is grounds for offense to people around the world, especially to our friends within the Jewish community.

In fairness to McCain (if not Hungary’s Jewish community), it should be noted that Hungarian Jewish groups have voiced strong opposition to the monument which they believe is a cynical attempt on the part of the current government to whitewash history in order to win over right-wing voters.