Shock and outrage over Hungary’s special relationship with Azerbaijan 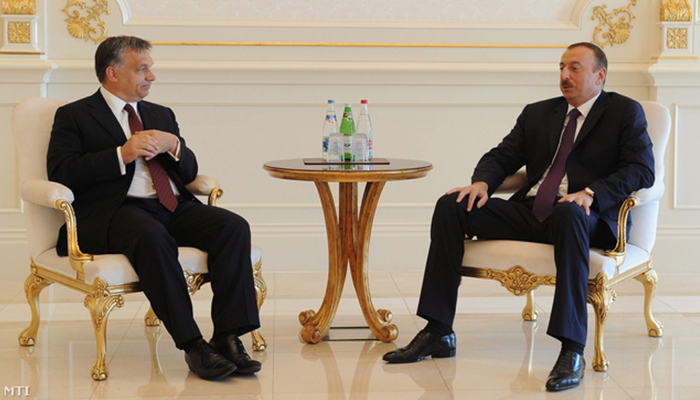 A new round of outrage and concern over Hungary followed Prime Minister Viktor Orbán’s meeting with Azerbaijan’s president, Ilham Aliyev, in Budapest on Thursday.  The two countries signed a “strategic partnership agreement” which, among other things, allegedly provides for gas-rich Azerbaijan to invest USD 45 billion building a new gas pipeline to central Europe.

According to Reuters the US has already expressed its concern over the extraordinarily strong ties between Hungary and Azerbaijan.

In its report on the Orbán-Aliyev meeting Reuters emphasized that most of the EU member states expressed their preoccupation over the fact that Hungary is supporting the South Stream gas pipeline construction. It echoed Orbán saying in defense that discussions, like the one he was holding with the Azeri president, are “strategically important” for Europe in general. Budapest government sources added that besides supporting the South Stream project, they also are “looking for alternative sources of energy” as in the case of Azerbaijan. US State Department sources however underline that Hungary’s closer relations to Moscow could mean a “breach of sanctions” the Western allies – including Hungary – have agreed upon.

German Conservative Frankfurter Allgemeine Zeitung reported that although it is known Orbán would like to acquire natural gas from Azerbaijan, and that the two countries signed a strategic partnership, the details of such a deal are still unknown. At the same time, Orbán – while claiming to only build economic ties with the dictatorship – openly praised the political regime of Aliyev and his father, emphasizing that “respect for our nation and family values” are the principal ties between Azerbaijan and Hungary. The report added that the Hungarian prime minister has been widely criticized for introducing authoritarian methods of governance within the framework of an EU member state’s political system.

Hungarian leftist opposition politicians think that the Orbán-Aliyev summit was just another step towards Orbán’s long-term plan of an East-oriented, authoritarian regime. Attila Ara-Kovács, Democratic Coalition (DK) foreign relations expert, told ATV that “no leaders of a civilized country go to Azerbaijan, let alone praise its leaders”. The politician pointed out that after the fall of the Soviet Union, Azerbaijan had severe economic and stability problems and a long and bloody war with neighboring Armenia in the beginning of the 1990s. Ara-Kovács thinks that on the one hand Orbán desperately needs success and recognition “since nobody else is willing to meet him right now”, but he also thinks that “there should be a real business benefit” from such a bilateral partnership for the individual leaders as well.

Lajos Bokros, leader of Movement for a Modern Hungary, also condemned Orbán’s dealings with the Caucasian country. He said he had visited Azerbaijan a couple of times and had seen a country where there is “no freedom of opinion or press.” He said Orbán’s “example state” in fact is a state of several prisons and concentration camps for political dissenters. Bokros said that, in effect, Orbán’s Azeri allies are “running a Fascist dictatorship that is not acceptable.”