Simicska: Viktor Orbán may have been a communist informer 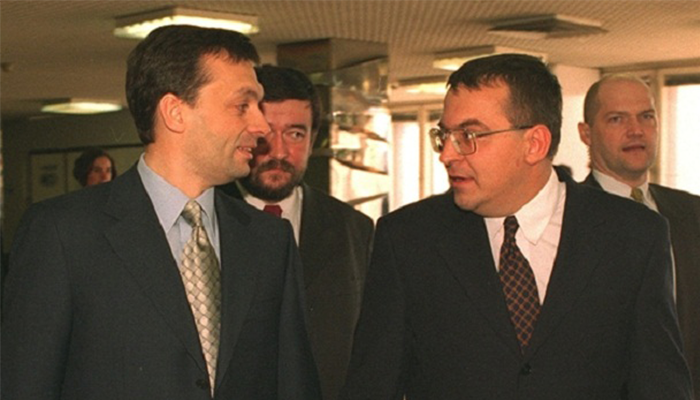 “I believed (Orbán) at that time. But now I am not sure if this is what happened that day.” – Lajos Simicska

In a short phone interview on Sunday afternoon, Fidesz former economic director and a long-time friend of Prime Minister Viktor Orbán, Lajos Simicska told Mandiner.hu that thirty years ago Orbán told him he is “supposed to file reports” on Simicska for the secret service. Simicska (pictured right) claims that he believed Orbán (pictured left) when he told him the communist secret service was unsuccessful in recruiting him, but that he does not “believe this to be true any more.”

The media oligarch explained that he started entertaining doubts a year ago, “following the Russian-Hungarian Paks II agreement.” He added that the Russians might have extensive copies of Hungarian secret service documents containing the prime minister’s records, even if Hungarian archives could not locate them. Simicska thinks that Russian President Vladimir Putin might be using these documents to blackmail Orbán into cooperating because “publishing such information could turn this country upside down.”

In the short interview given to journalist András Stumpf, Simicska gave an account of his family’s anti-communist heritage. His father allegedly was a member of the Workers’ Councils set up during the 1956 Hungarian Uprising. The media and building mogul told Stumpf this caused the Hungarian party state to hold him in constant suspicion, causing him to come under constant police surveillance.

According to Simicska, he and Viktor Orbán were already friends while spending their compulsory People’s Army service together in 1983-84. He recalled that during a relatively friendly conversation, his army station officer told him he had seen his file “which was already ten centimeters thick, even though I was only 22 at the time.” He said that after the 1989 regime change, he was unable to identify his folder.

Simicska also recalled how Orbán “had been taken away by some officers” toward the end of their army service. Simicska recounted to Mandiner that the day after being discharged from the army, he was going to celebrate with his former brothers-in-arms–all except Orbán who did not turn up until later in the evening. “How come you are here?” the young Simicska asked, to which Orbán allegedly replied that the Ministry of Interior “was trying to force him to sign something” but that he resisted.

“I believed him at that time.  But now I am not sure if this is what happened that day.”

Asked by Mandiner about Simicska’s claims, the Prime Minister’s Office of Hungary only responded by sending some earlier documents published by Orbán, which prove according to him that the only secret service recruitment attempt on him in 1983 was unsuccessful. This could not be easily proven or disproven, as immediately after the change of regime in Hungary thousands of files on secret service agents who might have been still active in public life at the time were systematically destroyed as one of the last actions of the communist state apparatus in 1990. In a recent interview former prime minister Miklós Németh told Index that photocopies of the shredded files might still exist in Moscow, because Soviet advisors copied most of these files before retreating from Hungary.