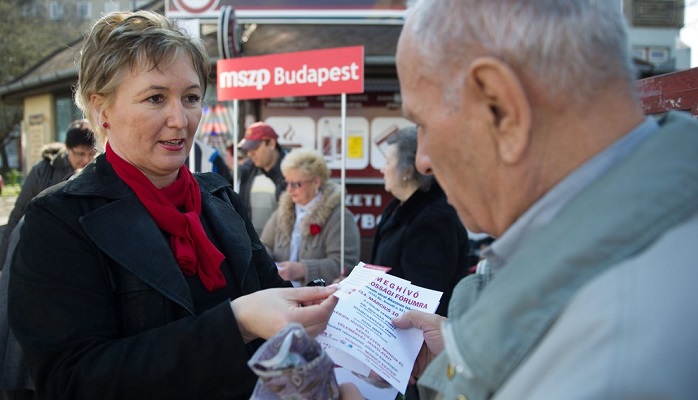 Móricz gained notoriety when she campaigned for the government’s anti-refugee position in last year’s refugee resettlement quota referendum, and later was willing to cooperate with Fidesz to oust the District 15 mayor. The Socialist Party’s (MSZP) decision to expel her from the party is not final – secondary proceedings will be conducted by the party’s Ethics Conciliation Committee.

Móricz came to the limelight when she, as a “believing Christian woman”, campaigned for a “No” vote in last year’s referendum, which asked voters whether they wanted the EU to settle migrants in Hungary against the will of the Hungarian people. At the time, she received only a disciplinary reprimand for acting outside the official policies of her party, and was able remain a member of MSZP.

This year, Mórciz was willing to take part in the committee that would have investigated Budapest District 15’s Democratic Coalition (DK) mayor László Hajdu, after Fidesz members of the district council initiated disciplinary procedures against the mayor for refusing to sign contracts he suspected of corruption and overpricing. The disciplinary procedures never materialized.

Former minister of interior and current District 15 notary Mónika Lamperth is in the background of Móricz’s expulsion, Móricz told Magyar Idők. She believes that Lamperth is laying the groundwork for DK leader and former prime minister Ferenc Gyurcsány’s run for MP of the constituency in next spring’s general election, and also controls Mayor Hajdu from the background. Further, says Móricz, the timing of the proceedings against her is not coincidental because party members who are subject to disciplinary or other proceedings cannot be nominated to run for MP in the 2018 election.