Spontaneous demonstrations erupted Monday evening after it was announced that President János Áder had signed the controversial bill on higher education, commonly known as Lex CEU. Protesters gathered at the Sándor Palace, the official office and residence of the president in Budapest’s Castle District, and the crowd swelled to some 1,500 people by 11:30 p.m.

The protesters were met by a heavy police presence in front of the palace, and chanted slogans like “Come out, János!”, “Orbán is a Russian stooge!” and “You signed it János, the city’s going to burn!” As riot police arrived, minor confrontations took place between protesters and law enforcement: several bottles filled with paint were hurled at the palace, and activist Márton Gulyás was arrested and taken away by police.

According to index.hu, 20 or so students of the Bibó István Vocational High School (attended by Prime Minister Viktor Orbán and a major segment of Fidesz’s founding members) were present at the spontaneous protest, wearing sweatshirts of their school and “I Stand With CEU” (Central European University) buttons.

One demonstrator produced a copy of the government’s latest “National Consultation” questionnaire form and, setting it on fire, chanted “Filthy Fidesz!” as the crowd around him cheered.

State television station M1 appeared on the scene to determine “how organized the protest is,” but demonstrators disrupted the broadcast by placing a Hungarian flag over the lens of the camera and stepping between the camera and correspondent. 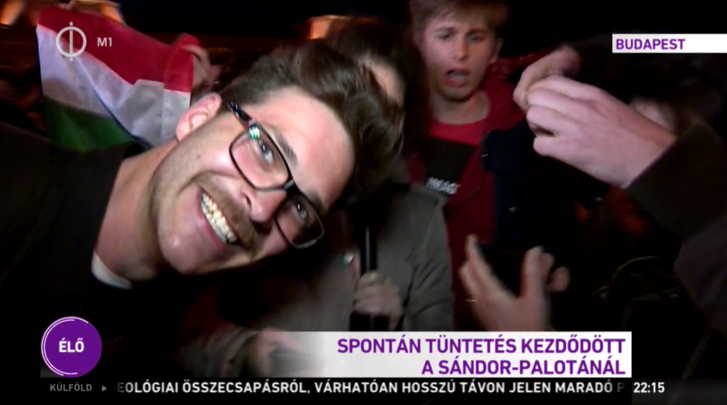 As the crowd neared 2,000, protesters decided to move across Lánchid (Chain Bridge) toward the city center. Police closed Clark Ádám square, Lánchid and the Castle Hill Tunnel to vehicle traffic as the crowd crossed the bridge, making its way up Kossuth Lajos utca toward Erzsébet square. From there, the protesters moved up Andrássy út to Oktogon and, occupying all lanes of traffic, shut down traffic on the Nagykörút (Grand Boulevard) as they made their way toward Blaha Lujza square. The crowd chanted “Come with us!” to bystanders.

From Blaha Lujza, the crowd moved toward the Hungarian Radio building near the national museum, a symbolic site which played an important role in setting off the 1956 Hungarian Revolution. A crowd of students was fired upon from the building by state security police in ’56 after they demanded the release of a detained delegation.

20-30 police awaited the crowd as it reached the Hungarian Radio building, and many of the demonstrators sat down in front of the line of police. Some in the crowd began discussing what they wished to communicate if they were to force themselves onto the radio. The brief message, “True news!” was decided upon, which the crowd then began chanting.

Riot police joined the police cordon as objects were thrown toward police, and some in the crowd began chanting “Don’t throw things!” and “Peaceful protest!” Police then began firing pepper spray into the crowd.

One woman managed to climb onto the radio building and attach an EU flag, drawing applause from the crowd. She was then pulled into the building by police but the crowd demanded her release, and after a few minutes she was let out from the building.

Finally, around 2 a.m., most protesters began making their way home, promising to meet again at a planned demonstration on Wednesday, and many singing “This is just the beginning.”