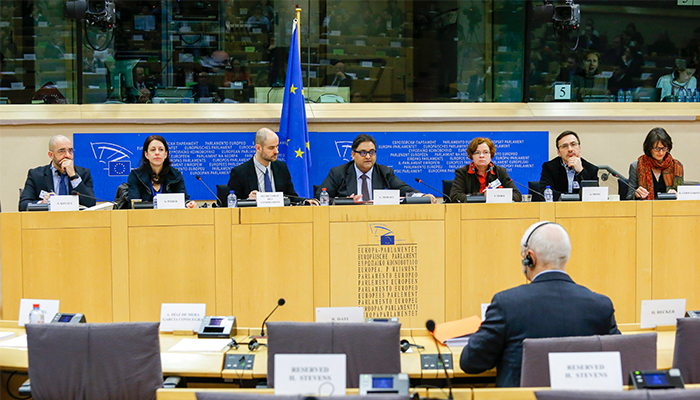 The Committee on Civil Liberties, Justice and Home Affairs of the European Parliament (EP) held a hearing on press freedom, civil society and basic human rights in Hungary on Thursday, January 22nd.

Before withdrawing in protest, European People’s Party (EPP) committee members criticized the committee for failing to invite a wider range of informants to the event, especially from the government’s side.

Pro-government media reported the sentiments expressed by government international spokesman Zoltán Kovács on the floor. Remarks critical of the government, however, received little coverage from Hungarian media, especially those made by non-Hungarian MEPs.

Hungary’s State News Agency, MTI, summarized Thursday’s hearing as the first one to elicit significant protest from the EPP and European Conservatives and Reformers.  One blog especially emphasized that Tamás Fricz, leader of Civil Unity Forum (CÖF), refused to participate in the hearing, calling it “one-sided and biased.” At the start of the hearing EPP representatives expressed their regret that Fricz’s voice would not be heard, criticized proceedings as a “breach of the EPP’s rights”, and withdrew from the chamber.

MTI emphasized that European Conservatives questioned the participation of Ökotárs leader Veronika Móra, saying her presence amounted to “intervention in the country’s domestic affairs”.  The news agency cited Móra as saying that the government probe against Ökotárs amounts to “intimidation.” It extensively summarized her standpoint about Hungarian civil society losing ground since the beginning of the second Orbán government.  Journalist Attila Mong’s comments regarding the many challenges facing the freedom of press in Hungary also received some coverage, but to a lesser degree.

MTI neglected to mention remarks made by Amnesty International’s Barbara Cernusakova. Nor did it report comments by MEP Cecilia Wilkstrom cautioning Kovács to show more respect towards the European Parliament and warning him not to think that the “EU will give up on human rights.”

Furthermore, there was no mention of Ana Gomes’ question to Kovács asking him to elaborate on Prime Minister Viktor Orbán’s remarks in his “Baile Tusnad speech” in which he praised the “illiberal democracies” of Turkey, Russia and China.

Hungary’s public television news service, Híradó summarized the events similarly, omitting essential criticism towards the government, preferring instead to cover statements from the floor in support of Orbán’s policies.

A statement issued by the Hungarian Ministry of Justice reacted to the hearing by stating that “in a legal sense, all of the issues raised are cases already satisfyingly closed at international forums,” calling “senseless” the fact that the EP even deals with these issues.

“The government of Hungary continuously refuses to give in to political provocation, and will continue concentrating on essential duties that fall within the frameworks set out by domestic, EU and international law,” the statement concluded.

During the second Orbán government, Hungary was continuously criticized by various EP committees and even the general assembly over changes to the country’s legislative system, efforts to curb the independence of the media, as well as last year’s clampdown on NGOs receiving funds via the Norway Civil Funds.