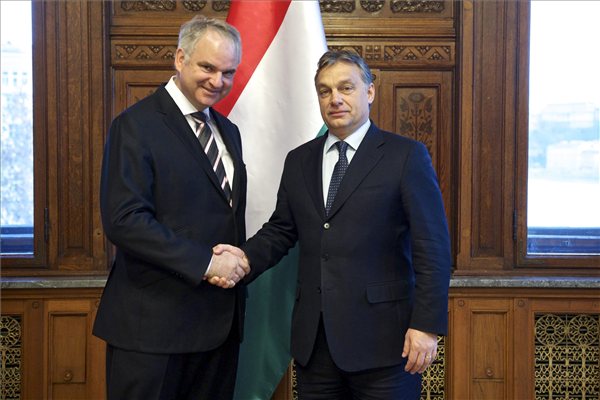 Hungary’s state energy company, MVM, may have overpaid for German energy giant E.ON’s Hungarian subsidiary by as much as HUF 600 billion (USD 2.6 billion) earlier this year, according to investigative journalism website átlátszó.hu.  If true, it means Hungary squandered more taxpayer money on this one deal than it spent building the fourth metro line (USD 2.1 billion).  Based on documents obtained by átlátszó, the deal was opposed by virtually everyone in Hungary, including cabinet members, and took place only at the insistence of Prime Minister Viktor Orbán.

In 2006 E.ON bought the company from MOL, the Hungarian oil and gas company. The first Orbán administration (1998-2002) had set the price of gas so low that MOL had suffered considerable losses. In 2009, believing ownership of the country’s main gas importer to be of strategic importance, the Gordon Bajnai government obtained a right of first refusal on E.ON’s Hungarian gas wholesaling business unit, E.ON Földgáz Trade.  However, negotiations failed to yield an agreement, and MVM stepped back from the deal in 2011.

They also questioned the wisdom of purchasing the unit in light of the fact that its contract with Russian Gazprom (which it had inherited from MOL) was due to expire in 2015. Industry experts pointed out that Hungary was unlikely to be able to negotiate comparable, let alone better, terms as German energy giant E.ON for the simple reason that, as the main gas importer and distributor for Germany and other European countries, E.ON was in a far better negotiating position than Hungary.

Their concerns fell on deaf ears. Orbán and E.ON chairman-CEO Johannes Teyssen signed a letter of intent in November 2012 providing for MVM to acquire the German energy group’s Hungarian subsidiary. At the time the government claimed it had signed the deal in order to create a stable, sustainable and cheap energy supply for Hungary.

It turns out E.On Földgáz Trade had suffered huge losses for years, and buying it was more akin to purchasing a dangerous time-bomb than taking out an insurance policy on cheap energy.

Although few details are known (wholesale gas contracts tend to be kept secretive), Hungary’s contract is reported to be one of the least favorable in the region. It reportedly does not cap the price of gas imported and gives Hungary very limited leeway to reduce the amount of gas it imports if there is a decline in consumption.

Apparently the greatest risk is the “take-or-pay” provision of the contract whereby companies failing to purchase the agreed upon quantity of gas from the supplier must pay a large penalty.

In the wake of the 2008 global financial crisis, Hungary’s gas needs decreased considerably. According to experts asked by Index in 2013, it is more than likely that E.On has not been able to buy the stipulated amount of gas for years.  And while it might have been allowed to defer the payment of penalties to the future, the amount of gas to be purchased was not reduced, meaning the company accumulated large liabilities to be settled with Gazprom in the future.

Given the company’s liabilities, it is unclear why the government wanted to purchase it, unless E.ON was only willing to sell its other Hungarian unit E.On Storage if Hungary bought loss-making E.On Trade as well.

One month after Orbán and Teyssen signed a letter of intent, MVM head Imre Mártha quit. In January 2013 he warned that the state was about to spend considerably more than it should on E.ON. “It seems to me that nobody dares to tell ‘the boss’ (Orbán) not to spend so much,” he said, adding that the contentious Sukoró land deal had been a “puppet show” compared to the E.ON deal. “This deal will place such a burden on the MVM that it will jeopardise the financing of the expansion of the Paks nuclear power plant,” he said, almost exactly a year before the EUR 10 billion (USD 13.34 billion) Paks II loan agreement was concluded.

The HUF 261 billion sale price was mostly financed with loans from several banks, including the Bank of China. The purchase was opposed by several opposition parties. Hungarian Socialist Party MEP Bertalan Tóth asked the government to reveal all the documents in connection with the deal, otherwise the parliament is only able to make a “blind decision”. Dialogue for Hungary (PM) MP Benedek Jávor asked the same, adding that “this bad deal can only be financed by loans, which further increases the state debt”. The purchase was made without fulfilling any of the opposition’s requirements and by modifying the annual state budget. When finalizing the purchase, spokesman for MVM György Felkai said that “it is in the firm’s interest that the documents in connection with the purchase be made available to a wider audience”.

Initial requests for the documents made by átlátszó.hu were refused. After one and a half years of legal wrangling, the court ordered the Hungarian state to release them.  When the documents were not forthcoming, átlátszó sued the Hungarian National Asset Manager (MNV) to obtain them, winning at the courts of first and second instance, and finally at the Kúria, Hungary’s Supreme Court.

On the basis of these documents, it looks as if MVM purchased a company that was practically bankrupt. The documents show that the independent estimation of the value of E.ON’s Hungarian subsidies was between HUF 111 billion and minus HUF 360 billion due to the risks of the “take-or-pay” contracts. This means that the price agreed was HUF 150-600 billion higher than the actual market value.

The German side announced it wanted HUF 261 billion for the two business units owned by its Hungarian subsidiary, adding that certain documents would be released only after the deal was complete. Despite lacking information with regard to the financial health of the E.ON business units in question, Orbán was absolutely determined to purchase E.ON”s Hungarian subsidiary.

The documents show that the negotiators from MNV were aware of the riskiness of the transaction and were afraid to go ahead with the deal without appealing to a higher authority. They wanted to submit their findings to the Ministry of National Development for approval.

Mrs. László Németh, then Minister of National Development, did not feel comfortable with the deal either, so in the end it was Orbán who agreed the government would indemnify MNV for any losses incurred as a result of the transaction.

“As everybody was pointing to a higher level decision during the business process, I would say the final responsibility should be held at the highest level,” asserted Jávor, who represents the Together-Dialogue for Hungary (E-PM) alliance in Brussels. “But this is something that must be decided by the public prosecutor and the court.”

Some references in the documentation indicate that, once the deal is concluded, the new owners might be able to negotiate with Gazprom concerning the take-or-pay arrangement. However, átlátszó states that it is very probable Gazprom or the Russian state has already asked or will “ask for something in exchange”.

Together-PM and the Democratic Coalition (DK) have announced that they intend to report MVM to the State Prosecutors Office for mismanagement and abuse of fiduciary duties over the purchase. “Buying something for a price that is HUF 150-600 billion (USD 640.1 million – USD 2.56 billion) higher than the estimated value – and spending taxpayers’ money on it – is misappropriation or malpractice, in the legal sense,” Jávor told the Budapest Beacon. “Misuse of public money must be investigated.”  He has called for Hungary’s highest levels to be held accountable.