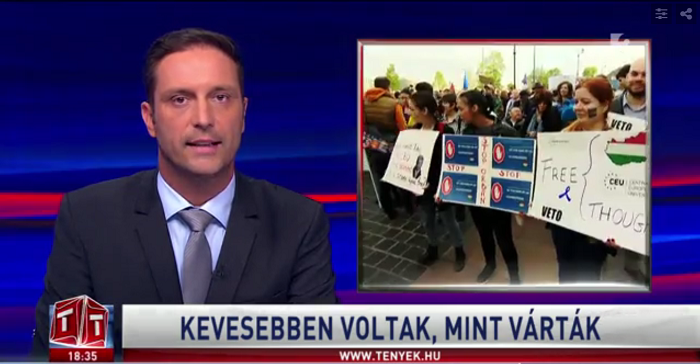 State and pro-government media outlets weighed in on Sunday’s demonstrations with disappointment, declaring that “a critical mass didn’t come together in the case of Soros university.”

The estimated 80,000-strong crowd that assembled in Budapest Sunday afternoon was described by pro-government tabloid ripost.hu as “a clear disappointment.” The site, which launched a print version last Fall, claimed that “dozens of buses brought together sympathizers, and they handed out free plane tickets in those large Central Eastern European cities where [financier and philanthropist of the Open Society Foundation George] Soros’ organizations are present.” The tabloid did not provide any citation or proof of the claim.

Fidesz vice-president Szilárd Németh was quoted by Ripost as saying, “the protests were devised by the agent organizations financed and managed by the businessman George Soros, because Fidesz submitted the law on the transparency of agent organizations supported from abroad.” Németh was referring to a bill proposed by Fidesz last week which would require civil organizations receiving more than HUF 7.2 million (USD 25,000) from abroad to register with the government as “foreign-funded organizations.”

Pro-government website origo.hu referenced the tabloid and repeated Németh’s claims, quoting him as saying “the organizations actively supported by George Soros have been continuously attacking the Hungarian government for two years for the purpose of disrupting the protection of the border and to force the free entrance of illegal immigrants.”

“They are openly encouraging the violation of Hungarian laws,” he continued.