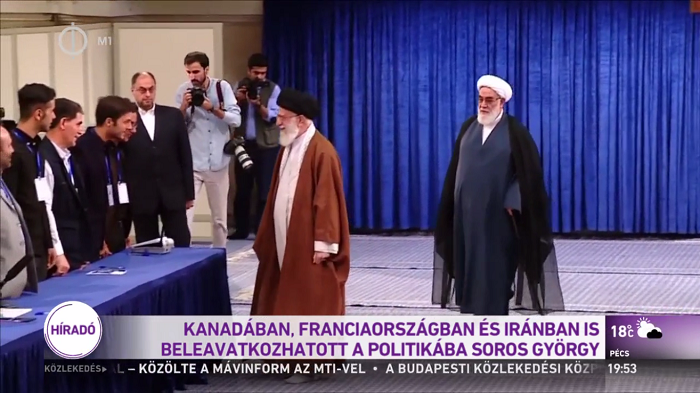 State television network M1 took the Hungarian government’s battle with Hungarian-American billionaire George Soros to a new level Wednesday when it referenced a quote from Iran’s supreme leader, Ayatollah Ali Khamenei, in which the cleric called Soros “an evil American and rich Zionist.”

The report on M1’s Hiradó news program first asserted that Soros had interfered in elections in Canada and France via civil organizations he financially supported, and then referenced a quote taken from the Shiite fundamentalist’s official website.

“An evil American and rich Zionist said that he managed to turn everything upside down in Georgia with $10 million,” Khamenei said, referring to Soros and his alleged role in the 2003 Rose Revolution in Georgia.

“In 2009, he was foolish enough to try to affect the Islamic republic, but he slammed against a strong wall of national will and determination. It is the same today,” he said.

According to M1, Khamenei suspects Soros was behind the widespread opposition to former Iranian President Mahmoud Ahmadinejad after his controversial re-election in 2009.