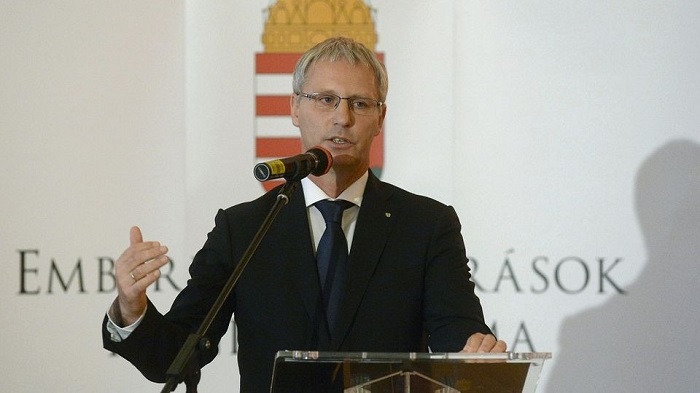 Soltész, who is responsible for overseeing “minority affairs”, which includes some half a million Hungarians who identify as LGBTQ, referred to people’s identifying with that community as “insane craziness.”

“LGBTQ, and we could continue, XYZ, who knows what’s behind these abbreviations and words, that’s not even interesting, it’s insane craziness,” Soltész said.

According to 24.hu, spokesperson for LGBTQ advocacy group Háttér Társaság (Background Society) Tamás Dombos told television station RTL Klub that 4.8 percent of Hungarians identified themselves as LGBTQ in a 2010 survey, which amounts to nearly 500,000 people. Dombos argued that Soltész should work on accepting this sizable minority in Hungary rather than arousing sentiments against them.

Dombos said the present government is substantially more homophobic and transphobic than Hungarian society at large: according to a recent survey, 60 percent of Hungarians advocated for equal rights for LGBTQ people. Fidesz supporters were the least likely in the survey to support same-sex marriage.

Bence Rétvari, Undersecretary for the Ministry of Human Capacities (in which Soltész is an undersecretary), told ATV in a March interview that gender studies go against traditional values, and that it is questionable whether it is a science at all or just an ideology of the liberal political movement.

“[Gender studies] deny what we think about natural human existence,” Rétvári said, explaining why his ministry was so opposed to the planned formation of a gender studies degree program at Budapest’s Eötvös Lóránd Science University (ELTE).