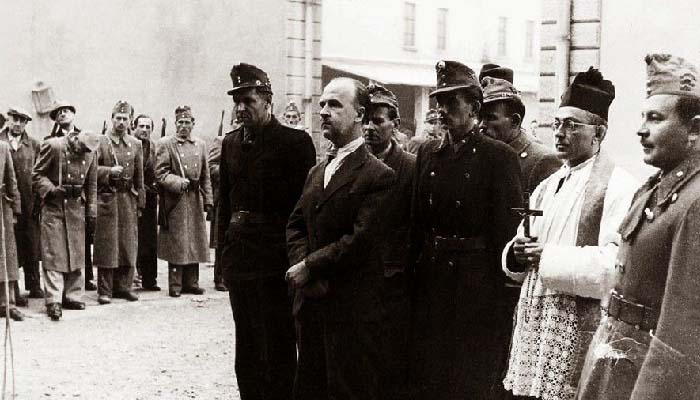 Fidesz deputy chairman Gergely Gulyás and former prime minister Péter Boross (1993-1994) will officiate at the unveiling of a statue erected in honor of Hungarian wartime politician György Donáth, pictured here just before his execution in 1947.

The statue will be put up by an organization calling itself the “Society for the Politically Condemned” on the corner of Páva and Üllői streets in the Ferencváros district of Budapest, a short distance from Budapest’s Holocaust Memorial Center.

The racist politician was executed following a show trial in 1947 for crimes he did not commit. Between 1939 and 1944 Donáth served as a member of parliament from the governing Hungarian Life Party (Magyar Élet Párt).  In addition to being the president of its Budapest chapter, he was deputy chairman of the party from 1943.

Donáth was an enthusiastic supporter of Hungary’s anti-Jewish laws. He founded an umbrella organization for smaller racist organizations called “Inter-organizational Cooperation” (Egyesületközi Együttműködés) whose bylaws referred to “the social war against alien races” and called for the exclusion of “those races and nationalities from Hungarian life which we consider to be detrimental to Hungary and the ethnicities living here, primarily the Jews”.

The organization was also a supporter of the National Socialist ideologies. He is known to be have been one of the domesticators of Hungarian racism and was instrumental in fomenting hatred of Jews, Swabians (ethnic Germans living in Hungary) and Romanians.

Donáth was executed after the war on charges of conspiracy against the (by then Soviet-controlled) republic for allegedly trying to rebuild the Hungarian Community (Magyar Közösség), a racist organization previously belonging to the umbrella organization he founded.  444.hu writes that the basis of the trial was unrealistic but served as a basis for the communists to start going after Smallholder Party supporters through individuals indicted in the case. Donáth was the primary defendant in the trial. In his final address to the court, he spoke for six hours.

Despite Donáth being a political racist and racial ideologue, none of this factored into his trial.

Renowned historian and wartime history expert Krisztián Ungváry told 444.hu “erecting statues to people like this is a public outrage”.

“There are numerous right-wing figures throughout Hungary’s history who are worthy of respect,” Ungváry said. “But it is of particular interest that the government only canonizes those which had a declared openness toward racists. Instead of people like Sándor Giesswein, Margit Slachta or Sándor Márai, they prefer to memorialize sick anti-semites, insignificant writers and notorious racists. I understand that the government has to steal intellectual ammunition from Jobbik. But … whoever gets into the trough will eventually eat the pig. György Donáth was innocent for the charges they tried him for in 1947 and the court did not seek to pursue real charges against him. But there was certainly much they could have charged him with. Donáth was one of the advocates of the anti-Jewish laws. He was more than a simple anti-semite: he even called for action to take place against those of German ethnicity.”

Gergely Gulyás is generally perceived as Prime Minister Viktor Orbán’s parliamentary proxy.  The presence of the influential chairman of the parliamentary legislative committee is likely to raise more than a few eyebrows.