Syrian refugee sentenced to 10 years imprisonment for actions at Röszke 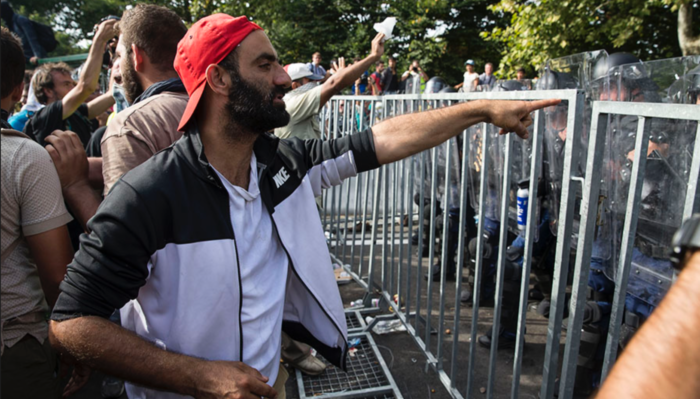 A Szeged court has convicted Syrian citizen Ahmed H. of terrorism for his role in clashes between asylum seekers and police at Hungary’s border with Serbia on September 16 last year, and sentenced him to 10 years imprisonment. Following completion of the sentence, he is to be permanently banned from Hungary, reports online daily index.hu. Upon hearing the verdict Ahmed H. reportedly burst into tears.

The “Battle of Röszke” pitted Hungarian riot police and counter-terrorism commandos against migrants, including women and children. A number of young men threw rocks and debris at riot police after Hungarian officials used pepper spray to disperse a crowd upset over finding their entry to Hungary blocked.

Ahmed H. was charged with attempting to forcibly compel a state body (in this case, the Hungarian police) to admit the crowd gathered on the Serbian side of the border into Hungary. The indictment states that he spoke into a megaphone, shook the police cordon, threw objects at the line of police, and stepped illegally into Hungarian territory. The court found that he had incited the crowd through a megaphone, and had not tried to calm them down, as he asserted.

The sentencing was attended by representatives of the United States embassy and Amnesty International, Hungarian and foreign journalists, and the ambassador to Hungary from Cyprus where the accused had lived for 10 years before attempting to travel with his family to Germany via Hungary. At the time of his arrest, Ahmed H. was in possession of papers authorizing him to move freely within the European Union. He was at the border to help his family with his money and language skills in their journey towards the EU from Syria. His aging mother and father were subsequently charged and convicted of crimes connected to the “riot.”

As we reported earlier, Ahmed H.’s trial was postponed at the end of October after he received new legal counsel, and a judge agreed to allow more time for the defendant and his lawyer to mount a defense.

The court declared that Ahmed H. will be eligible for parole after serving two-thirds of his sentence.

Fidesz released a statement approving the court’s decision, saying that time has proven that mass migration threatens the security of Europe, and that the danger of terrorism has persisted.

“We can’t allow for terror to deepen and spread throughout Europe and come to Hungary, and everything must be done to protect Hungary from the settlement of migrants,” the statement reads.