Századvég: Hail to the thieves! 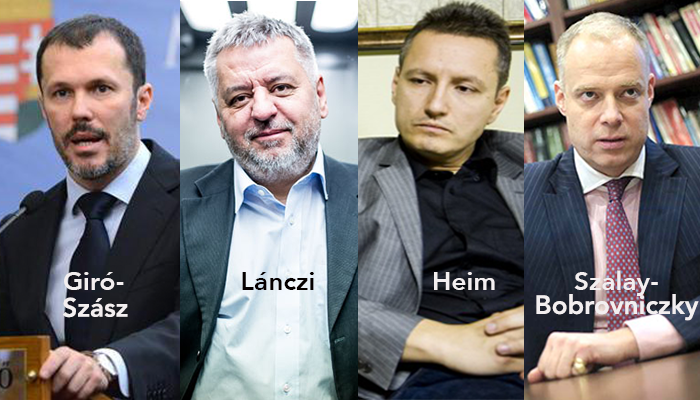 “I quit Századvég because it became apparent to me that the whole think-tank is merely a money-laundering factory.” – Tamás Mellár, former Századvég research director and economist

Founded in 1991 by István Stumpf, a former member of the Hungarian Socialist Workers Party, the name of the Századvég Politikai Iskola (“End of the Century Political School”) was later changed to Századvég Alapítvány (“End of the Century Foundation”).  Stumpf served as its director until 1998 when he left to serve as the head of the Office of the Prime Minister under the firstViktor Orbán government (although he himself was not a member of Fidesz).  After Fidesz lost the 2002 general election, Stumpf returned to Századvég Alapítvány as its chairman, a position he held until July 2010 when he was appointed an Associate Constitutional Court Justice (despite lacking the credentials stipulated by law).

Stumpf was succeeded by András Lánczi, who had founded the conservative Center for European Renewal in 2007.

In March 2010, just one month before the general elections of April 2010 which Fidesz was widely expected to win by a landslide), Századvég Alapítvány director Péter Heim founded economic researcher Századvég Gazdaságkutató with András Giró-Száz. Between 2011 and 2013 the research company invoiced the government, state-owned companies, governmental agencies and even Fidesz itself some HUF 3.9 billion (USD 18 million) for “consulting and research activities”. The private, government-funded “think tank,” has been accused by at least one former employee of being a “money launderer” and of peddling influence.

In 2014 Századvég contracted with the Office of the Prime Minister for HUF 1.36 billion (USD 6 million) to allegedly represent Hungarian interests and to lobby on behalf of Hungary in North America.

Shortly after that contract was awarded, ownership of a luxurious flat in a prestigious part of Budapest previously owned by Századvég co-founder András Giró-Száz was reportedly transferred to the ten-year-old son of the head of the Office of the Prime Minister, János Lázár. Not long thereafter Giró-Száz joined the Office of the Prime Minister as undersecretary for communications, where he reports directly to János Lázár.

In addition to  Napi Gazdasag, both Századvég Alapítvány and its principals own shares in a number of investment companies active in Hungary, with much of the capital being furnished by foreign investors who apparently understand the importance of having the right business partners in Hungary.

In addition to István Stumpf, present and former Századvég  shareholders and directors have held and continue to hold key government positions.  Most recently director György Barcza replaced failed Széchenyi Bank owner István Töröcskei as head of the State Debt Management Center (ÁKK) Zrt..  Prior to that Barcza worked as the editor-in-chief of Napi Gazdasag, the daily print newspaper Századvég Alapítvány purchased in February 2o13 from FHB Zrt. owner and CEO Dr. Zoltán Spéder (who, in addition to running a bank, also owns only daily publications portfolio.hu, index.hu, napi.hu, as well as being the managing editor of vg.hu, giving him a virtual monopoly on economic and business news in Hungary).

In September 2011 Giró-Száz left Századvég Gazdaságkutató to become official government spokesperson, a position he held until after the general election of April 2014.  Replacing him at the head of Századvég Gazdaságkutató was none other than Századvég Alapítvány Deputy Chairman Kristóf Szalay-Bobrovniczky.  After returning briefly to the “private sector,” in November Giró-Száz was appointed undersecretary at the Office of the Prime Minister, where he reports directly to Minister Lázár.

Shortly after the April 2014 election it was revealed that Strategopolis had produced two “image monitoring studies” totaling some 100 pages for the Fidesz parliamentary caucus at a cost of HUF 9.8 million (USD 40,000), or HUF 98,000 (USD 400) per page.  Since January of 2013 Strategopolis Kft. has been preparing news for state media company MTVA for sale to private radio stations for an annual fee of HUF 42 million (USD 170,000) plus VAT.

In November 2014 Giró-Száz reportedly “sold” his 61% interest in Strategopolis Kft. for HUF 750 million.  The company paid its minority shareholders HUF 43 million (USD 180,000) and HUF 127 million (USD 500,000) in 2012 and 2013, respectively.  However, he retained his ownership of various real estate holding and management companies run by his brother-in-law.

In addition to being a director at Századvég Alapítvány, Péter Heim is presently the owner of Sphaera Investments Zrt., the National Development Consulting Projektfejlesztő Zrt., and the Hemisphere Risk Capital Management Zrt.

The following interview with Századvég Alapítvány then-deputy chairman Kristóf Szalay-Bobrovniczky was published in the print edition of Napi Gazdaság in November of 2014 under the title “Századvég is blazing new trails” (“Járatlan úton a Századvég”).  (Many of Szalay-Bobrovniczky’s answers are difficult to comprehend in Hungarian, which is why the English translation may seem ponderous at times-ed.)

– What will happen now that the court has obliged the Office of the Prime Minister to release those studies prepared for the government by Századvég since 2010?

– We share the opinion of the Office of the Prime Minister, which Minister János Lázár stated in parliament, according to which the documents should be made public in the event a second-level court decision is handed down.

– We could not do this on the basis of contracts signed with the Office of the Prime Minister.  Furthermore, there are also issues of intellectual property.

– It is necessary to understand the actual goal and value of the assignments.  Somehow our critics always neglect to analyze this.  Századvég is the kind of think tank that mostly does political work.  Its task is to recommend alternatives to political decision makers supported by studies, international comparisons and public opinion polls.  In their language, taking into consideration their special needs, and mapping out the potential political consequences, with the goal of preparing decisions.   Experts working in public administration are overburdened intellectually and have neither time nor means to undertake this kind of work.  The two functions built on one another are realized in political decision making and execution in many places in the world, especially in developed democracies.  That is why I think the fees are proportionate to the value created by Századvég.  This is especially true if we look at the similar work performed by our political predecessors, for whom this ratio was very questionable.

– How do you measure the quality of the completed work?

–  Századvég’s credibility and success can be measured in the results of the government’s work.  If we look at the economy, the macroeconomic data, at politics, then the three elections—parliamentary, European parliamentary and local elections—the Orban government was truly successful given its victories. Századvég contributed greatly to this, and for this reason the HUF 3.9 billion you mentioned was a good investment on the part of the government.  Századvég played a role in the decrease in household utility costs, the decisions helping the FX loan holders, and government actions in relationship to Hungarians living abroad.

– According to our information between 2006 and 2010 the Gyurcsány–Bajnai governments spent nearly HUF 17 billion (USD 77 million) on public opinion research and the preparation of strategic and expert policy studies.   Furthermore, this huge amount cannot be considered comprehensive, since many institutes do not possess information about the research activities of the Gyurcsány–Bajnai government.  How is this possible?

– I can only speculate.  I find it very strange that while we submitted more than 50,000 pages of documents (including background documentation), the activities of the socialist-liberal government over a period of eight years does not draw critics’ attention despite there presumably being obvious deficiencies.  We are going to suggest that a request for public information be submitted in order to reveal what studies, in what quality and quantity were prepared during that period.  One thing is certain: according to the above standard, money spent on this does not appear to be a good investment given the success of the work of the government they supported.

– The above amount was over a period of four years, but again it is worthwhile examining what the purpose of the engagements were.  Századvég made recommendations and received an order to professionally build up and use “public diplomacy,”  the system and means of open diplomacy.  Traditional diplomacy means the relationship between governments, while open diplomacy is a comprehensive series of efforts, which include cultural, gastronomical (sic), scientific, and business relationships with businessmen, public opinion leaders, think tanks, scienctific and cultural institutions, all of this within a unified framework and a centralized, message-forming team.  It is interesting to observe how the Georgians, Armenians or Jewish minorities represent their interests in the United States.  These offer good examples to the method of promoting Hungarian interests and values.

– Given the poor state of American-Hungarian relations isn’t this HUF 1.3 billion wasted money?

– No, it is especially relevant right now.  The world has changed.  The struggle between great powers has strengthened.  In the case of a small country like our homeland—in the middle of Europe, with a great power an immediate (sic) neighbor, furthermore near to a war zone—how we turn to the public opinion, government, supporting institutions and media of another great power is of great importance.

– In light of the spirit of Eastern opening why don’t you represent Hungarian interests in China?

– We are already working on achieving the same goal adopting to the unique qualities of Asian culture: a strong representation of Hungarian values and interests through open diplomatic means.

– Economist Tamás  Mellár believes “the whole workshop is just a money laundering operation.”  What do you think about this statement?

– His appearance is politically motivated.  It’s very strange that he should speak out three years after he left the Economic Research institute on the basis of a mutual agreement we initiated.  He worked for us for eight months, a good eight months before we received our first government order.  His claims are unsubstantiated, which is demonstrated by the fact that he withdrew after we denied his allegations.  (Századvég also sued him for defamation.-ed.)

– Do you not find the attacks on Századvég disconcerting?

– Winston Churchill said “Have you got opponents? Good.  That means you built something with your life at some point.” In general those are attacked who are of significance.  Everyone who works here is a professional expert, and we know that we are attacked for our high quality work.  On the other hand our successes give us strength!