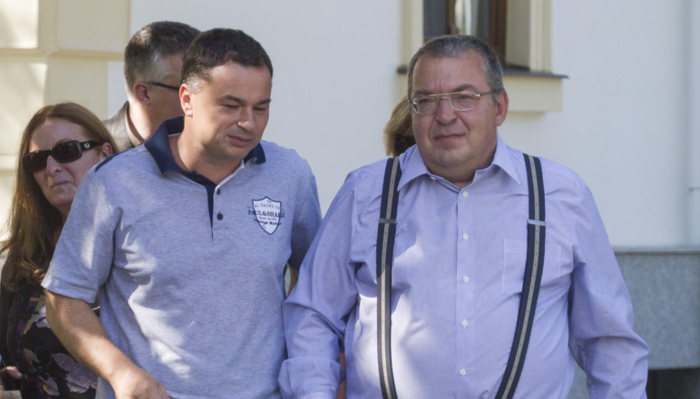 On Monday former editor-in-chief of Magyar Nemzet Gábor Liszkay, pictured here with Fidesz oligarch Lajos Simicska (in suspenders), purchased the print version of Napi Gazdaság from the Fidesz government’s favorite think-tank (and slush fund-ed.) Századvég Gazdaságkutató Zrt.  According to Hungarian news website HVG.hu, the sale is part of an effort to create another pro-government political and economics newspaper.

The daily newspaper formerly belonged to FHB Zrt. owner Zoltán Spéder, who continues to own the on-line version, napi.hu. (Spéder is also the owner of index.hu and portfolio.hu, which may explain the pronounced lack of media coverage concerning the controversial sale of the government’s majority interest in Takarékbank to a company controlled by Spéder at the beginning of 2014.)

According to the statement, the new management wants to preserve Napi Gazdaság’s economic reporting and expand into social, public life, political and cultural context in the coming months.  (In fact, Napi Gazdaság has served as a faithful government mouthpiece since being acquired by Százádvég in 2013 –ed.)

HVG.hu recently reported that pro-government forces are trying to establish a strong pro-government newspaper in the wake of the Simicska feud with Prime Minister Viktor Orbán. The rift has led to Simicska (and his media companies) strike a more critical tone of the Orbán regime.  Gone are the days when Magyar Nemzet faithfully toed the government line in exchange for copious government and state-owned company advertising (not to mention the hundreds of billions of forints worth of Hungarian and European taxpayers’ money diverted to Simicska in the form of a steady stream of lucrative government construction contracts-ed.).

Between 2010 and 2014 Magyar Nemzet was a staunch advocate of the Orbán regime, faithfully toeing the government line and reliably leaking documents and information embarrassing to members of the political opposition and civil society alike.

Liszkay and Csermely reportedly left Magyar Nemzet earlier this year because they were unwilling to turn against the prime minister.  However, Simicska has denied they were ever asked to do so and has accused the two of deliberately distorting the facts of the matter at the behest of Orbán in the hope of obtaining key positions with a new, vastly expanded state media.

Liszkay was also a shareholder in Magyar Nemzet but was bought out by Simicska for HUF 100 million, according to the Fidesz oligarch.

HVG.hu reports that Liszkay’s role at Napi Gazdaság will be to turn the paper into a widely read publication that could conceivably replace the likes of Magyar Nemzet and Magyar Hirlap as pro-government daily newspapers.

According to HVG.hu, many of the former employees of Magyar Nemzet may be employed as staff writers at the new Napi Gazdaság.