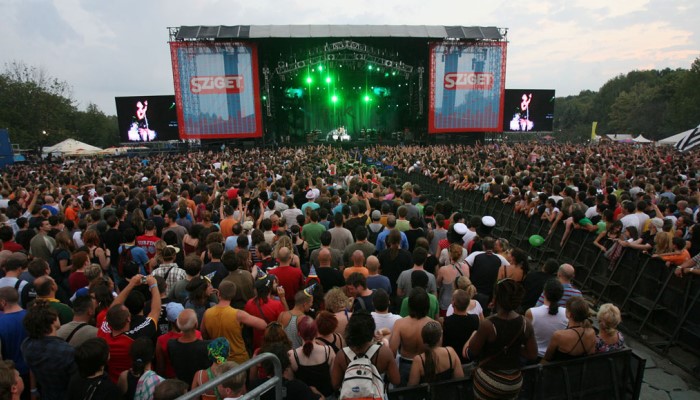 The all-time day record of over 85,000 visitors to the Sziget festival was marred by the paralysis of one festival goer from spinal injuries and over 30 people being injured in a crush during a Stromae concert on Thursday.

The festival, which is held on the Danube island Hajógyari Sziget, also broke its week-visitor record, with 410-420,000 people, in part thanks to weekly tickets selling out for the first time, Sziget boss Karoly Gerendai said. The previous week-high was in 2009, when 390,000 attended, while last year that figure was 361,000. Gerendai said 390,000 was “the break-even point” when he spoke to journalists on Sunday, the final day of the festival.

However certain areas of the festival site were conspicuously crowded in the second half of the week and disaster was narrowly averted on Thursday, when overcrowding in the A38 tent during a performance by the Belgian rapper Stromae resulted in more than 30 injuries.

One concertgoer told 444.hu: “We were convinced that we were going to die. We were being crushed from all sides… all the girls and boys around us were gurgling and shouting that they were going to die. If someone passed out, they could not fall down, but just hang in the crowd like a rag doll. They said the audience had struggled to communicate to security guards that they could not breathe, until we saw them open a security cordon to let me out a few people, we also ran over and ran out”. Sziget press chief Csaba Marinka said they had considered putting Stromae on in a larger space, but he had wanted to perform in a tent in the dark. Around 1,700 people were given medical attention at this year’s festival.

Sziget pays Budapest HUF 55 million for the use of the site, which had been gratis before 2011.

However Gerendai is said to be close to the government, and Sziget Kft. received state aid of  HUF 745 million this year. Government spokeswoman Eva Kurucz said “it is important to support these festivals because they do not just throw in the hospitality industry, but foreign visitors are the tourists of the future,” when the amount was announced in July.

The event began life as ‘Student Island’ in 1993 but despite Gerendai’s claim it is “an anarcho-syndicalist democracy”, Sziget Kft. is now big business, overseeing Balaton Sound – which is more popular with Hungarians than Sziget – Volt, Strand, Nagyon Balaton and – over the border – the Félsziget in Romania and the “Kiev Sziget” on Trukhaniv Island.

Despite the drama, the 2014 Sziget, the 22nd, represented a financial rebound for Gerendai, who had responded to lacklustre 2013 figures by opting to hold the festival a week later and strengthen marketing abroad. “When the Sziget clashes with US and Japanese festivals, it is hard to lure big stars,” he explained at the time. The Sziget is also reaping the benefits of an earlier marketing campaign that targeted one European country each year. The festival is particularly popular with the Dutch, and many French and British youngsters also attend. Foreigners account for over 80% of those who buy weekly passes. However daily tickets are more popular with locals, making the overall Hungarian-foreigner split around 50-50 this year, according to organisers. Ticket sales contribute 75% to total revenues, sponsorship 15% and goods sold on site 10%.