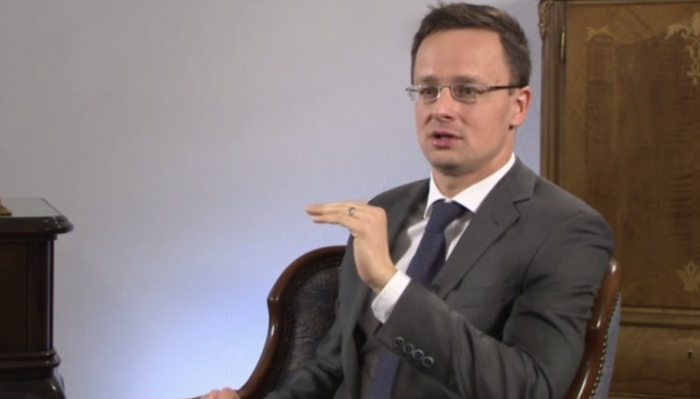 “I agree with the Prime Minister that a very long, very serious series of attacks and pressures has come against the elected government of Hungary from the direction of the United States, and certain Hungarian media and Hungarian NGOs have played a leading and visible role in this.”  – Péter Szijjártó, Hungary’s Minister for Foreign Affairs and Trade

Minister for Foreign Affairs and Trade Péter Szijjártó gave an interview to ATV this week, speaking at length about perceived American intervention in Hungarian affairs, the mysterious but ever-present role of George Soros in directing public life in Hungary through NGOs and media, deteriorating relations between himself and his American diplomatic counterparts, and the hopes of the Orbán administration in a Donald Trump presidency.

Szijjártó claims that the United States is meddling in Hungary’s internal politics through “a lot of intervention attempts and pressure in the last two years,” many of which he attributes to Hungarian-American businessman and financier George Soros.

“I think that George Soros is present in a lot of attacks against Hungary and in a lot of pressure put on Hungary; his network is there and his capital is there. He has a very close relationship with the Clinton family, this is totally obvious and nobody disputes it. The Clintons are one of Hungary’s biggest American critics, that’s a fact,” Szijjártó said.

“These attempts at pressure almost without exception came from America, and everybody knows that George Soros is a big player and has a lot of influence in American politics. Everyone knows that among George Soros’ objectives is the undermining and overthrow of the Hungarian government . . . I think he has certainly invested in that.”

The foreign minister claimed that America has constantly tried to discredit Hungarian political leaders through “general accusations with nothing concrete,” and has taken every opportunity to criticize Hungary during presidential speeches, at multilateral conferences or at State Department gatherings. He emphasized that “from now on, Hungarian foreign policy is going to be different, and we aren’t going to say that another country is right just because it is bigger. Until now the American foreign strategy kept us under constant pressure, openly and under the surface as well. They wanted to make yes-men out of us, who would just nod.”

Szijjártó acknowledged that he and Assistant Secretary of State for European and Eurasian Affairs Victoria Nuland had a very bad relationship where they had “yelled at each other” and had “very bad conversations.” Nuland, who is expected to be dismissed by the incoming Trump administration, tried to influence Hungarian internal affairs including the country’s laws, the Constitutional Court, the media and elections, all things which “the United States has nothing to do with,” he said.

“I really resented that she constantly accused Hungary, showed it in a bad light, expressed unscrupulous slanders against us, and meanwhile didn’t say anything concrete,” Szijjártó said of Nuland. “I was later informed that she would gladly meet with me, but I refused. I said that I think there would be no point.”

(This reaction of refusing to engage with those leveling criticisms is not unique to Szijjártó in the higher levels of the Hungarian government. In an interview two days ago with pro-government website Pesti Srácok, government spokesman Zoltán Kovács responded to the question, “When will [Prime Minister] Viktor Orbán give a normal interview to any openly opposition media?”

Kovács answered: “The prime minister is quite an experienced politician and he knows exactly what would come of an interview where an openly opposition organ put forth questions. There’s no need for that.”)

Szijjártó denied that civil society groups and NGOs were in any way representative of society, because “society is represented by the elected governments and elected politicians, and no one voted for a single civil organization.” He said NGOs have their membership, but “their legitimacy is not comparable with the legitimacy of a government elected by several million people.”

“The world’s political and media elite defer to the NGOs to tell us what they think society wants,” Szijjártó claimed. “We don’t think it’s like this, because society says what it wants in elections by choosing a government and parliamentary representatives. So the assertion that NGOs represent the people and that the government is against them is a simple and total lie. We know quite little about whose interests these so-called ‘civil’ organizations represent, who they get money from, or to whom they are accountable.”

Szijjártó suggested that NGOs have been the vehicles by which America has attempted to influence Hungarian policy, and that “even a blind person could see that when the Americans said something, who it was that blew it up to the sky.”

Statements by leading Fidesz politicians suggest that NGOs supported by the Soros Open Society Foundation will be investigated by the Hungarian secret services in the interests of national security, but since such investigations don’t fall under the supervision of the Foreign Ministry, Szijjártó declined to comment on whether these are planned. However, he believes such investigations would be “exceptionally good,” not only in Hungary but globally, to determine “what kinds of sources non-governmental organizations are working from.”

Transparency is expected from government, as it should be, Szijjártó said without a trace of irony, but “it isn’t fair that there is, say, a government, which a so-called NGO opposes with decisive force and influences the people, and the people have no right to know with whose money they are being influenced. I think investigations are a legitimate expectation, because a lot can be revealed from them.”

(The Orbán government has already launched protracted investigations against civil society groups financed by the Norway Civil Funds in Hungary, none of which turned up any illegal activity. The investigations were recently found to have been personally ordered by Viktor Orbán.)

Szijjártó complained that not only NGOs but the Hungarian media deliberately seeks to undermine democratic institutions at the whims of foreign interests.

“I agree with the Prime Minister that a very long, very serious series of attacks and pressures has come against the elected government of Hungary from the direction of the United States, and certain Hungarian media and Hungarian NGOs have played a leading and visible role in this,” he said. “I could make a long list of the lies, deceptions, and attempted tampering [in the media] concerning the leadership of my institution, after which nobody ever came forward and said, pardon me, I made a mistake. It has to be noted that when they try to destabilize the institutional system meant to protect the country’s domestic and especially foreign interests with all kinds of hearsay, all kinds of rumors, then I can only think that it’s not totally accidental.”

Szijjártó believes that under a Trump presidency, Hungary will no longer be the subject of political pressure or “baseless accusations” at the hands of America, and US-Hungarian relations can only improve now that the Hungarian government will no longer have to spend so much energy denying falsehoods levied by American interests.

“If we hadn’t had to spend a substantial part of our energy on reacting to all kinds of lying accusations, and if the constant task of diplomats serving in America wasn’t to go to different places explaining that what was written here, what was written there, and what this NGO said is not true, then we would have achieved even better results. I am convinced the creation of a few hundred or even a few thousand workplaces serves the interests of the Hungarian people better than us arguing with someone who wants to explain to us how they think we should live and how they see democracy.”

The election of Donald Trump demonstrates that Americans want a change, Szijjártó said, adding that “the American foreign policy of exporting democracy has brought trouble onto our heads in numerous parts of the world. We see unfinished, needlessly opened conflicts and ill-conceived interventions happening. It will be better not only for Hungary but for the entire world if the lecturing American foreign policy, focused on exporting democracy, comes to an end.”

President-elect Trump has asked former Goldman Sachs senior manager and “Soros man” Steven Mnuchin to be his Secretary of Treasury, a move which could be of concern to those worried about Soros’ influence in American and world politics. Szijjártó, however, isn’t worried, declaring that Trump is an “independent person who cannot be influenced” and is choosing his cabinet “completely independently” of where they may have worked before.

Szijjártó praised Trump for reportedly inviting Orbán to a White House visit, which he described as “a big deal, because in the last six years not only was there no such intention, but [the Obama administration] said clearly that there will never be such a meeting as long as there is a democratic government and as long as we don’t do what they want us to do; they made that clear. We didn’t really take it personally, but it is definitely good news that there is a political intention related to a meeting.”