In an interview given to a Polish news portal this week, Hungarian Minister for Foreign Affairs and Trade Péter Szijjártó declared that Hungarian history provides no reasons for Hungarians to feel threatened by Russia.

Szijjártó stuck to earlier statements he and his party have made regarding Hungary’s “pragmatic” relationship with Russia, which he described as an economic one.

“It’s one of our most important commercial partners and it plays an important role in Central Europe whether you like it or not,” he said. “Russia provides 85 percent of our gas imports. That’s why it’s impossible not to have a dialogue.”

When the Polish journalist who wrote a 2013 biography on Prime Minister Viktor Orbán suggested that Russia had represented a threat to Poland throughout its history, Szijjártó disagreed.

“You’re Polish, you live here… I’m not Polish, I don’t live here, I don’t have a Polish mindset. I’m Hungarian and we have our own history. We don’t view Russia as a threat, period,” he said.

The foreign minister’s statements are a curious departure from the attitudes of many Hungarians toward Russia and its role in their history: revolutions in Hungary were crushed by Russian forces in 1849 and 1956, and the country was occupied by Soviet forces for more than 45 years.

In contrast to the Fidesz government’s fawning approach to Russia under President Vladimir Putin, most Hungarians continue to view Russia with suspicion. A wave of recent demonstrations in Budapest has criticized Orbán’s increasingly close relationship with Putin, and Fidesz opponents claim that the Hungarian government is transforming the country into a Russian-styled autocracy.

A recent Publicus poll published in Vasárnapi Hirek, a weekly newspaper, shows that Hungarians increasingly believe the Orbán government’s foreign policy primarily serves Russian interests: 26 percent responded in April that Russia is the prime benefactor of Hungary’s foreign policy decisions, up from only 9 percent in November 2016. 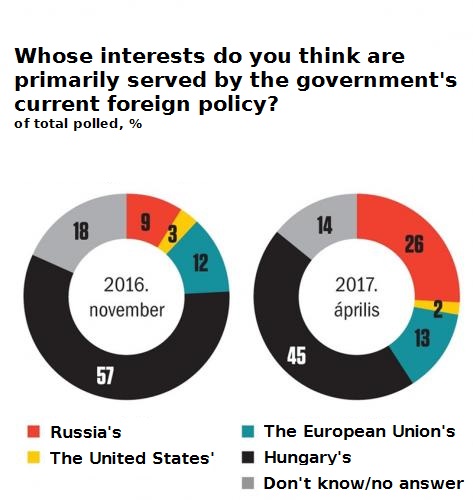