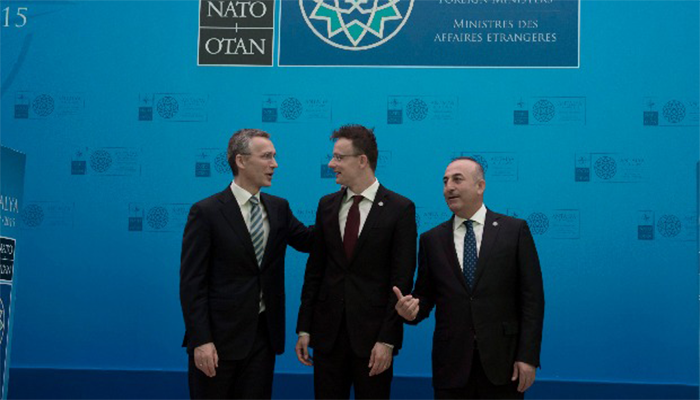 NATO needs to change significantly if it wants to be able to deal with the challenges coming from the east and south, Hungary’s foreign minister Péter Szijjártó (pictured, centre) told Hungary’s state-run media during a telephone interview from a NATO summit in Antalya, Turkey.

Szijjártó used the summit to tell the international organization not to forget that Hungary is faced with “pressure” from migrants arriving from the Western Balkans.

He said the Hungarian government has taken steps since the NATO summit in Wales earlier this year to ensure the country is capable of adapting to the region’s military challenges. He said Hungary will be taking part in air force exercises along the borders of NATO’s Baltic allies and Russia later this year. Szijjártó also pointed out that Hungary is already taking part in NATO missions with almost 500 soldiers in Afghanistan and Kosovo.

He reminded Hungary’s state-run media that Hungary sent 140 soldiers to Lithuania last spring to take part in military exercises and that the Hungarian government is continuously developing the country’s air force base in Papa, which NATO considers to be an important logistical base.

Szijjártó said he was left with the impression that it is more important than ever for NATO and the European Union to work together.