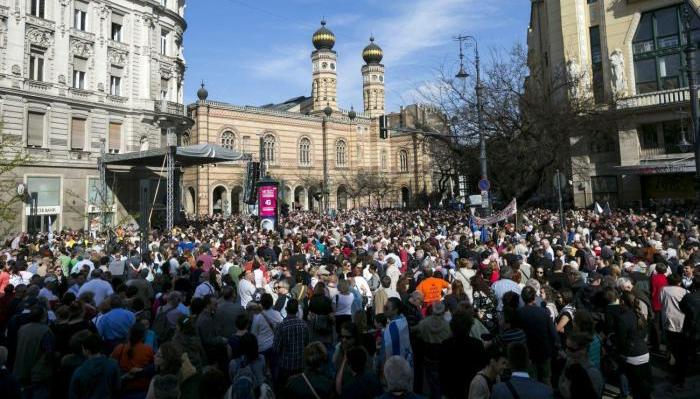 Tens of thousands marched from Budapest’s Dohány street synagogue to the city park on Sunday in peaceful commemoration of the Jewish victims of the Hungarian Holocaust.  Among the speakers to address the crowd was Ronald S. Lauder, chairman of the World Jewish Congress.

This year’s annual “Life March” marked the 70th anniversary of the liberation of the Budapest ghetto by Soviet troops.   Peace March Foundation trustee László Bandi said the march was a “warning” of the importance of taking steps to prevent the “past of our grandparents and parents from becoming the future of our children.” 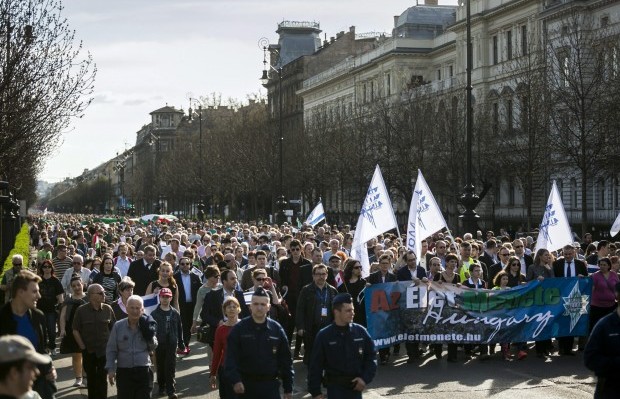 Sunday marked the 13th occasion when thousands marched in remembrance of the half million Hungarian Jews killed during the Second World War and in protest against genocide, racism, terror and “all devilish, murderous variations of discrimination.” 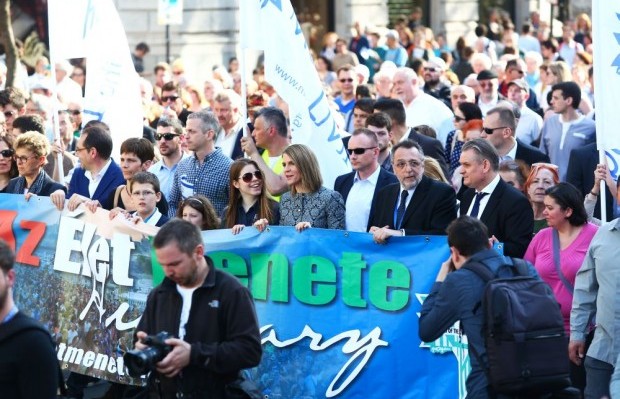 Peace march organizers reportedly distributed paper Hungarian, European Union and Israeli flags.  Also spotted in the crowd was the blue-green flag of the Roma, some 28,000 of whom perished in concentration camps during the Second World War.

The peace marchers stopped at the Szabadság square, home of the so-called  “memorial to the victims of the German invasion of 1944” erected exactly a year ago.

There Budapest District 7 mayor Zsolt Vattamány told the crowd “the wound of the Holocaust was still open, not only because it was allowed to happen but because so many allowed it to happen” and that “indifference was the most serious spiritual disease.”  He said that by January 1945 the number of Budapest Jews forced to live in the ghetto delineated by the Dohány, Kertészand Király streets and Károly ring road approached 70,000.  He said the survivors were confronted with the loss of nearly everything and the destruction of their families.

All Jews living outside of Budapest were deported to Auschwitz in the Spring of 1944 except for able-bodied males who were impressed into labor battalions, where many perished in battle or at the hands of their tormentors.

The mayor said it was important to stand by one another “not only with words but with deeds.”

“We must learn from the crimes of the past, and we must teach the generations to follow that it is not enough to remain neutral, but that determined, courageous resolve was required.”

Vattamány told the crowd it was necessary to help others develop an authentic picture of that period.

After marching three kilometers to the city park, the marchers commemorated the life of head rabbi József Schweitzer who died this year.  Peace March Foundation trustee Gábor Gordon called Schweitzer a “true friend and teacher to all of us who worked for Holocaust studies and against racism in Hungary.”

After presenting a short film by András Salamon and the Peace March song composed by Péter Sziámi Müller and Ferenc Fegya Jávori, Lauder took the stage.  He said extremist party “Jobbik does not even realize the damage it is causing to the future of Hungary.”

“I stand before you as a proud Jew of Hungarian ancestry.  But I know that if my grandparents had not left Hungary, if I had been born here in 1944, then I would have been one of the many tens of thousands of young Jewish children gassed at Auschwitz.”

Lauder told the crowd that once again Jews found themselves the targets of racism and bigotry, and the same signs could be seen as during the time of Hitler, Aschwitz and the Arrow Cross.  He said the bronze shoe memorial was erected on the left bank of the Danube to commemorate the Jews murdered there, and that “nobody had the right to spit in those shoes” in reference to the desecration of the memorial at the hands of a Jobbik member of parliament.

He reminded the crowd the important role Jews played in the development and defense of Hungary.   “We musn’t allow Jobbik to destroy Hungary.  Hungary’s inhabitants deserve better than that,” said Lauder.

In a pre-recorded video message, Martin Schulz, president of the European Parliament, stated that there was no place for discrimination in the European Union.  “We must ban all forms of discrimination, be it based on gender or race, skin color or ethnicity, social class, language or religion, disability or sexual orientation,” Schulz announced.