Translation of András Mizsur’s article “CEU and Kárpátia can stand side by side if the goal is to get rid of Orbán” appearing in Abcug.

It appears Viktor Orbán’s system has brought together Jobbik supporters and liberals. Saturday’s anti-government demonstration in Budapest accommodated support for Central European University as well as national radicalism. The most important thing is that the government be defeated, everything else is a minor, said the protestors. The most important demand of the speakers was the scheduling of new elections and solidarity on the part of opposition parties.  Balázs Gulyás, the organizer of the internet tax protests, spoke of this, at the same time announcing that they were calling citizens into the streets the following week as well.

“Good question! Well, strange,” answered a young man wrapped in the EU flag at Saturday evening’s anti-government demonstration when I asked him what it was like to protest against Viktor Orbán’s system together with Jobbik supporters. He and his friend saw that Jobbik supporters were also in this position.

This was the strongest motive behind the “‘We are the majority!’ demonstration for democracy.” In the crowd, which amounted to many tens of thousands of people, it was possible to see Jobbik, Árpad (red) striped, and EU flags. Many came to the demonstration wearing either Jobbik or Kárpátia t-shirts, even though buttons supporting civil organizations behind last year’s demonstrations and CEU also showed up.  Signs criticizing Ferenc Gyurcsány could be seen next to banners proclaiming that electoral fraud had taken place.

Jobbik’s rebirth as a popular party was credible

The young man mentioned before believes there are values that are important both to Jobbik supporters and liberals, including rule of law and democracy.  Perhaps they do not agree on gay rights, but for now these are side questions, he explained. Diversity is important, as well as that Jobbik be in parliament.

Others were not put off by the fact that Jobbik participated in the protest organized by civil organizations. “Why not, if it’s in the interest of a common goal,” responded a Momentum supporter carrying an EU flag.  He believes Jobbik’s rebirth as a people’s party was credible, and that today Fidesz is far more of a radical rightwing party than Jobbik.  Gábor Vona’s resignation took backbone. “I would have expected the same from Gyurcsány after the election.”

The “opposing camp” was of a similar opinion, at least with regard to the goals of the protest. “We need to put our priorities in order!” said a man wearing a Jobbik t-shirt, who, along with his Jobbik sympathizer wife, went to the Kossuth square to demand Viktor Orbán’s resignation.

“Orbán’s defeat is now the most important thing, we can discuss the details later,” he said. If they were to sit down over a beer to speak, then they would realise that liberals and Jobbik supporters have much more in common than they think.  There was nothing said over the course of the demonstration that they could not have agreed with. Only party politics and ideology divides the people, he added.

“I was proud to don the Jobbik t-shirt and for them to see that we are also here. No atrocities took place because of this.”

However, one interplay indicated that it was not easy for everyone to digest the presence of Jobbik supporters. When I spoke with the Jobbik supporter, a woman came up to me and said “it was not easy to march next to somebody with a swastika tattooed on his arm.” Afterwards, the two parties spoke peacefully. It also turned out that the woman’s partner was of gypsy descent. The man’s wife also said that she never agreed with the party’s radical direction, and that remaking Jobbik as a people’s party was unavoidable. It is not possible to sweep problems under the rug, but that does not mean they want to solve them radically.

They will demonstrate again in one week’s time

Although many parties indicated previously their support and participation, only the presence of Jobbik and Momentum was conspicuous.  At the beginning of the demonstration a smaller group of Jobbik supporters showed up carrying a banner saying “The people cannot be voted out.” This  slogan appeared last summer on advertising kiosks owned by Lajos Simicska’s company, ordered by a private individual. 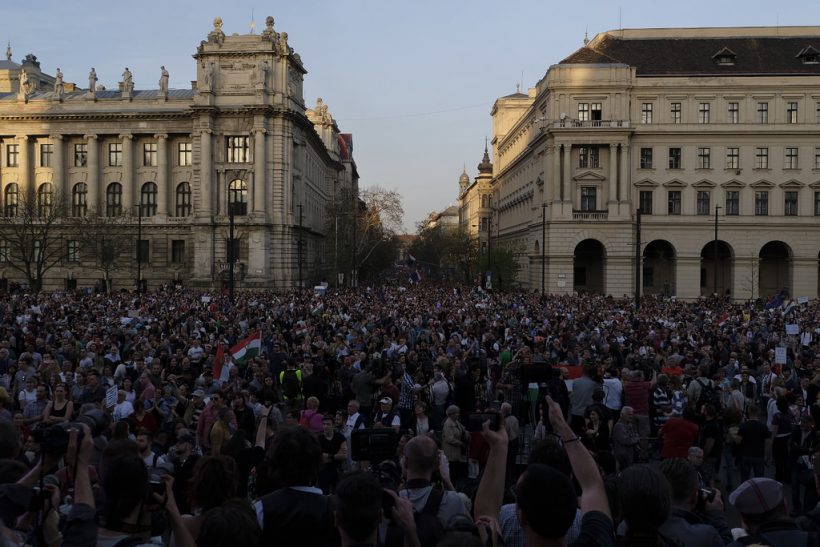 Momentum supporters also turned out in large numbers led by party chairman András Fekete-Győr.  We did not see any LMP, MSZP or DK flags or banners. Among opposition politicians could be seen Ákos Hadházy, Bernadett Szél, Péter Juhász and Ágnes Kunhalmi.

The most important demands of the speakers were new elections and opposition party solidarity.  Internet tax protest organizer Balázs Gulyás spoke about this, announcing at the same time that they would call citizens to the streets again in a week’s time.

“The most important thing is that we want new and fair elections. This is the responsibility of the government, and we will remind them of this peacefully and in large numbers!” said Gulyás.

Since Sunday the independent press has been writing extensively about anomalies experienced over the course of the election. However, the newspapers rule out the possibility of systematic fraud. Gulyás spoke rather about the deficiencies of the electoral system and the government’s dominance of the media.

Viktor Gyetvai, one of the organizers of student demonstrations at the beginning of the year, called on opposition parties to start negotiating with one another, “because Fidesz can only be defeated if next time only one opposition candidate runs (in each of the 106 electoral districts).”  Afterwards the crowd held aloft their shining cellphones and chanted “we are the majority” and “Orbán scram!” 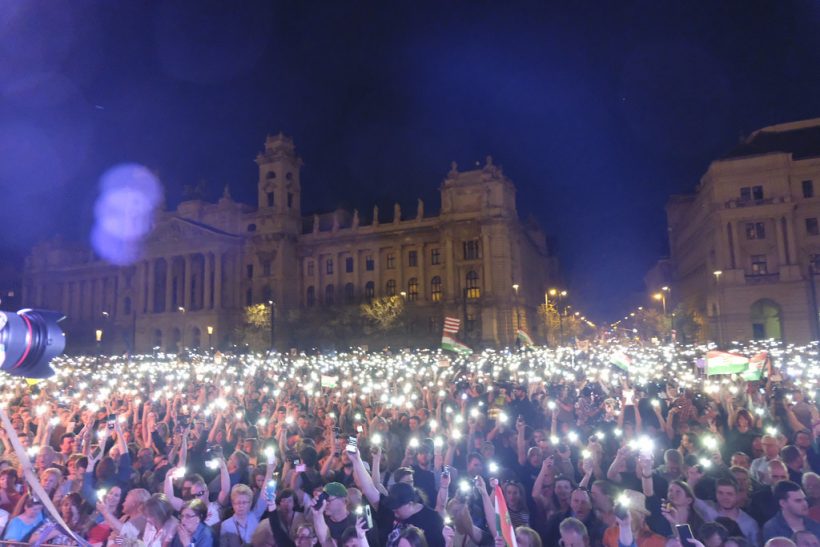 It was already possible to see on Facebook that many would attend the protest: more than 38,000 RSVPed and another 85,000 were interested. Exact numbers are not known, but a good basis for comparison is that by the time the tail end of those marching reached the Opera, Kossuth square was already full.  This is why the march to the square did not begin for some time.  The organizers wanted to wait for demonstrators arriving later.

The organizers emphasized before and after the demonstration that the protest was peaceful and asked everyone to follow the law. For days government media has been writing about a frenzy of “Soros believers” and aggression. (Pro-government daily online-tran.) Origo envisioned an “anarchist provocation.” None of this came to pass. After the final speech, much of the crowd dispersed from the square. A smaller group remained before the Parliament building, but there were not serious instances. There were some who marched to Oktogon and to the Lindsay street Fidesz headquarters, but there was no need for the police to interfere.