Tens of thousands protest for education freedom in Budapest 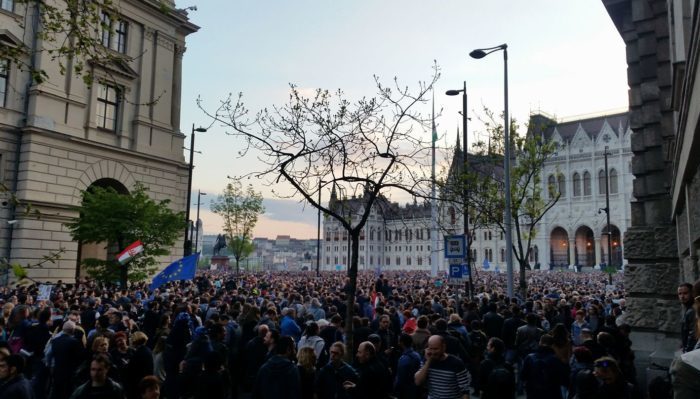 Chanting “Freedom for Hungary, freedom of education,” tens of thousands of demonstrators marched from various points in Budapest to the Hungarian Parliament Sunday afternoon, where a phalanx of police officers prevented them from entering the building. Unlike most of the demonstrations of the past few years, Sunday’s protest, along with last week’s demonstrations, featured mostly people in their twenties and thirties. Protesters were visibly angered by last week’s accelerated passage by parliament of a modification to the higher education law, making it virtually impossible for Budapest’s Central European University (CEU) to continue operating in Hungary.

One of the stated purposes of the demonstration was to persuade Hungarian President János Áder not to sign the modified law, which was adopted with minimal debate despite an international outcry over provisions clearly targeting Hungary’s most prominent private institution of higher learning.

The demonstration was organized by Freedom for Education (Oktatási Szabadságot) — the same Facebook group that organized last Tuesday’s and the previous Sunday’s demonstrations. Originally asking protesters to gather in Clark Ádám square before marching on parliament, after 18,000 responded that they would join the protest, the organizers moved the staging area to the front of Buda’s Várkert Bazaar, just south of the Chain Bridge.

“János Áder has until Monday to refer the law to the Constitutional Court. Let us show him on Sunday that this is the right decision! And let us show the members of the Constitutional Court as well, that there is but one appropriate decision: standing up for educational freedom, university autonomy, and freedom of thought,” wrote the organization.

By 5 pm tens of thousands of protesters had already converged on the Várkért bazaar, spilling onto either side of a stage that had been erected. Shortly thereafter American-Hungarian CEU graduate student Dániel Berg opened the protest by telling the crowd “there are times when a politician must prove himself a statesman,” referring to Hungarian President Áder. “Let there be freedom of knowledge, education, and thought!” said Berg, before repeating his comments in English.

Berg was followed by Katalin Törley, Blanka Sulyok, Nóra Diószegi, and Sandra Czégány. Taking turns speaking, they told the crowd that power fears autonomy and free thought. Calling attention to the victims of segregation, they said most gypsy children live in poverty forced to attend schools where there is no toilet paper, no talent management, and no opportunity.

“Viktor Orbán is not concerned with them,” said one of the speakers, pointing out that disadvantaged children living in dire poverty are stigmatized and that inequality of opportunity is characteristic of Hungarian education today. They told the crowd that the current Hungarian educational system is “a dead end” from which tens of thousands fall out each year and become public work employees. 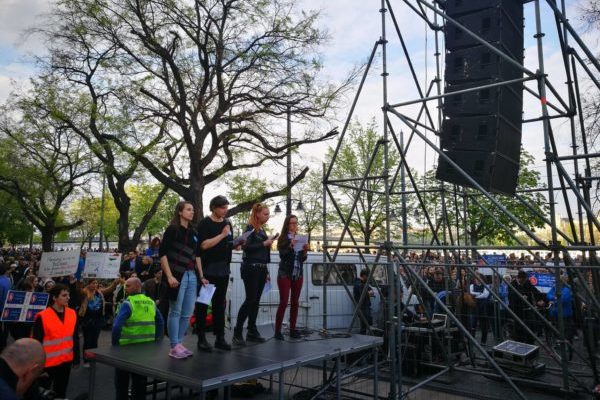 Diószegi reminded the crowd that at the beginning of the year schools were required to compile lists of students who were refugees and asylum seekers. “This demonstration is also a show of support for them,” said Diószegi, calling ignorance and limited intellect “the hotbed of deceitful propaganda.” They concluded their speeches by calling for and end to exclusion, exclaiming “Freedom for the country, freedom for education.” 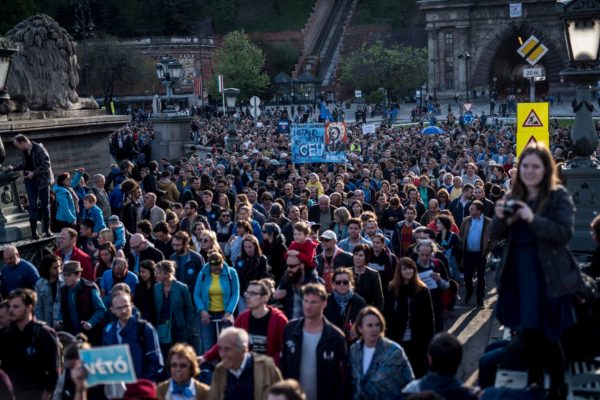 Shortly before 5:30 pm the crowd began slowly crossing the Chain Bridge in the direction of CEU’s campus, where they were joined by smaller groups of protesters arriving by different routes from Clark Ádám square and from other points in the city. From there they proceeded to Kossuth square. 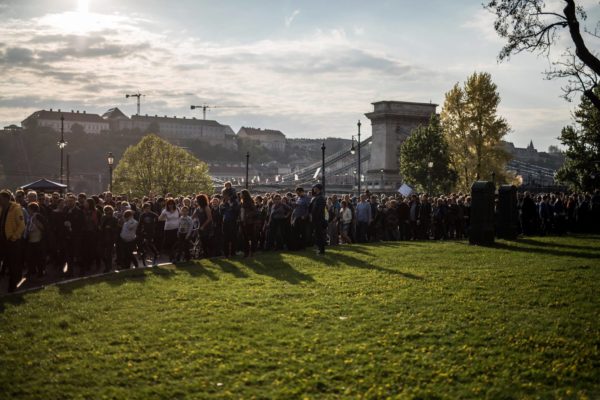 The crowd, estimated by organizers to number between 70-80,000, converged on Kossuth Square in front of the Hungarian parliament where they were addressed by CEU Phd students Gábor Bróday and Péter Márton, as well as Greenpeace activist Katalin Rodics. Unable to fit in the Kossuth square,the crowd overflowed along Alkotmány and other streets as far as the main boulevard to the east, where police for forced to temporarily suspend tram service. 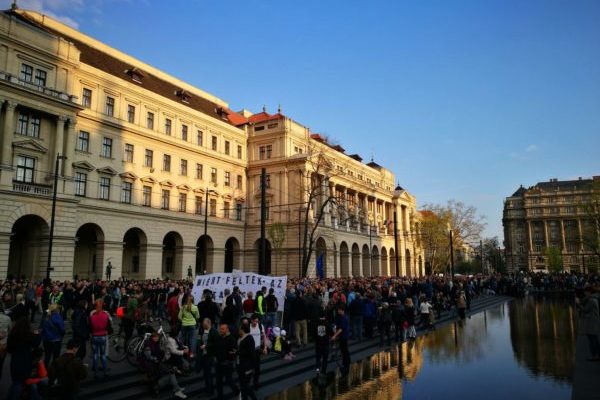 Shortly after 7:15 p.m., the crowd sang the Hungarian national anthem. Instead of dispersing, however, the crowd chanted “Viktátor” and “Orbán get out!” Met by a phalanx of police on the steps of parliament, the crowd chanted “We are the people” and “The Hungarian police are with us,” but also “You’re protecting criminals,” and “This is the end, Viktor!” Elsewhere they chanted “to prison,” and “this is the consultation,” (referring to the so-called 2017 national consultation on “stopping Brussels” currently in full swing). 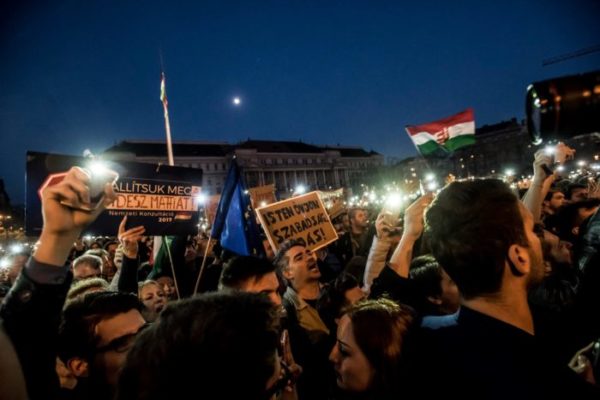 Originally scheduled to end before 7 pm, the demonstration continued well into the night.

Shortly before 8 pm, the atmosphere in the Kossuth square became more tense as a determined group of protesters chanting “traitors” and “Freedom for the country, freedom of education” threatened clash with a phalanx of police several rows deep on the steps of parliament. 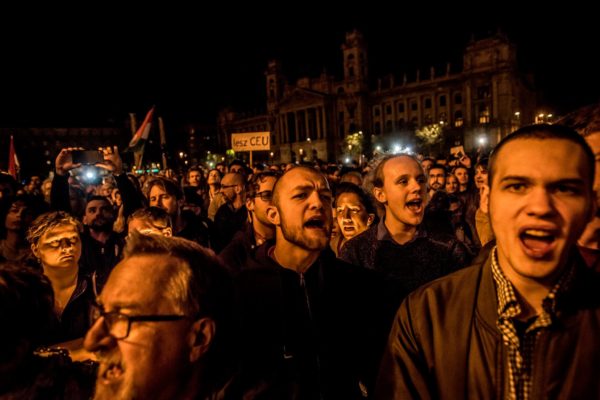 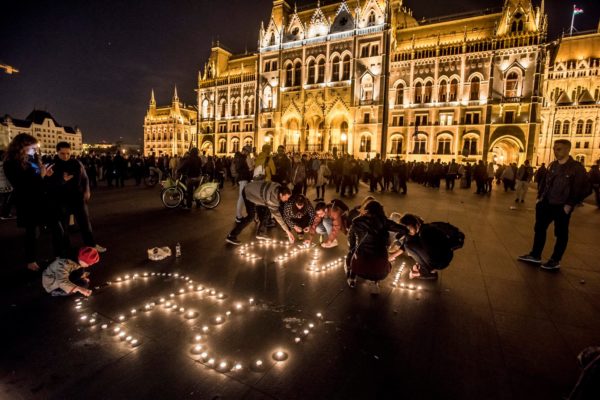 Shortly before 9 pm roughly a thousand demonstrators left Kossuth square onto Budapest’s Nagykörút in the direction of Andrassy street, pausing in front of the Ministry for Human Resources. Encountering a large police presence at the Szalay street building, the crowd continued in the direction of the Fidesz headquarters at Heroes’ Square. Prevented by the police from entering  Rippl-Rónay street (two years ago internet tax protesters pelted the Fidesz headquarters with various computer components), the protesters filed into Heroes Square.

Elsewhere, at Oktogon, where Andrassy street intersects the main boulevard, a group of some 500 protesters blocked traffic until well after 11 pm.